From Internet Movie Firearms Database - Guns in Movies, TV and Video Games
(Redirected from Lee-Enfield No.4 Mk 1*)
Jump to navigation Jump to search

The Lee-Enfield saw extensive service with the armed forces of the British Empire and Commonwealth during the first half of the 20th century. In the United Kingdom, the Lee-Enfield rifles were the standard infantry rifle of the British Army from 1895 to 1957, when they were replaced by the L1A1 SLR; even after being phased out, they were still used as a secondary infantry rifle for reserve forces, and a 7.62mm version of the Lee-Enfield under the designation L42A1 was used as a sniper rifle all the way into the 90s.

Today, nations like India, Pakistan, Nepal and Canada still use the Lee-Enfield rifle as a standard issue rifle for police forces and reserve military units. In Canada, the Canadian Rangers used the Lee-Enfield No. 4 rifle as their standard-issue rifle until 2018, when they were replaced by the purpose built C-19, but the Lee-Enfield will not be fully phased out till 2020. In India and Pakistan, the Lee-Enfield is used by both nations' police forces, with India utilizing a 7.62mm NATO version of the No. 1 Mk III* rifle called the Indian 2A/2A1 rifle. Australia still manufactures/converts Lee-Enfields as hunting/plinking weapons in a range of calibres like the 7.62mm NATO and the Soviet 7.62x39mm M43, with Australian International Arms (AIA) manufacturing modern versions of the Lee-Enfield rifle for the civilian firearms market.

The Lee-Enfield rifle saw use in many military conflicts from the late 19th century onwards (easily outstripping the length of service the Mosin-Nagant Rifle has achieved), being used in the Second Boer War, the First World War, the Second World War, the Korean War, the Malayan Emergency, the Suez Crisis, the Mau Mau Uprising, and the Soviet-Afghan War. The Lee-Enfield has also seen use in the hands of insurgents in nations like Nepal, Afghanistan, Iraq, India and the Solomon Islands. Over 17 million Lee-Enfields have been produced worldwide since 1895.

The Lee-Enfield is notable for its relatively high rate of fire compared to other bolt-action rifles. Unlike Mauser-derived bolt-action rifles (with their 5 round internal magazines and "cock on opening" bolt systems), the Lee-Enfield has a 10-round magazine and a "cock on closing" bolt system, which allowed a well-trained rifleman to fire between 15 to 30 aimed rounds in under 1 minute.

The Lee-Enfield features a detachable box magazine, though they are almost always reloaded with stripper clips (SMLE or CCLE). The Lee system rifle was originally designed with a possibility to reload by replacing the magazine, while refilling was to be done with single cartridges. In practice British soldiers initially were optionally equipped with a single spare magazine, while the main magazine was attached to the rifle with a chain link. As a result of the Second Boer War, the developed new SMLE rifle received a charger clips, which were recognized the best choice for fast loading, and most of the MLE later also received this modification.

Note on "SMLE": The name "SMLE", short for "Short, Magazine Lee-Enfield", was originally used to designate the Short Magazine Lee–Enfield Mk I rifle, contrasting the earlier "Magazine Lee-Enfield" (MLE) rifles that had longer 30.2-inch barrels (the original SMLE had a 25.2-inch barrel). The SMLE Mk I would be updated to become the famous SMLE Mk III and SMLE Mk III* rifles used in WWI. After the war, the British Army changed their firearm nomenclature to use a "number" system, renaming the SMLE Mk III and Mk III* rifles to "Rifle No. 1 Mk III" and "Rifle No. 1 Mk III*". The name "SMLE" has not been officially used since then, and it is not a catch-all term for all Lee-Enfields.

The Lee-Enfield rifle series and variants can be seen in the following films, television series, video games, and anime used by the following actors:

The Lee–Metford (a.k.a. Magazine Lee–Metford, or simply MLM) is a rifle, combining James Paris Lee's rear-locking bolt system with a magazine and barrel designed by William Ellis Metford. It replaced the Martini-Henry rifle in 1888. While officially replaced by the improved Lee-Enfield in 1895, it still remained a reserve arm in many parts of the British Empire into WWII, even being issued to the New Zealand Home Guard and the Australian Volunteer Defence Corps until more modern rifles could be obtained. In British service, the Lee–Metford was also upgraded to the standards of later rifle patterns (e.g. to charger loading and Short Rifle, the SMLE pattern), though the barrel was almost always switched to one with Enfield pattern rifling, with the ability to fire new smokeless ammunition. Small numbers of Lee–Metford rifles later were converted to experimental automatic rifles, such as the British Howell and South African Reider, and the best-known of which was the Charlton Automatic Rifle.

The .303 calibre, Rifle, Magazine, Lee–Enfield, or simply Magazine Lee-Enfield (MLE), nicknamed "Long Lee Enfields", are the first variants with the Lee-Enfield name. They were in British service between 1896-1907. Of note is that the Lee-Enfield Mk I is externally identical to its predecessor, the Lee-Metford Mk II*; the only difference between the two is the internals of the barrel and the use of improved .303 Mk II ammunition with smokeless powder.

The CLLE (Charger Loading Lee Enfield) are Magazine Lee-Enfields converted to load from chargers. Other changes include new sights, and the lack of a chain mount on the magazine, as it now had to be removed only for cleaning.

Rifle, Short, Magazine, Lee – Enfield (or SMLE for short) Mk I was first tested in 1902, and finally entered service in 1904. It included innovations based on the experience of the Second Boer War. The overall length of the rifle was between the long infantry version and the cavalry carbine to effectively replace both of them. The barrel has received reliable protection in front. "Sliding" guides for loading from chargers (clips) were introduced. The magazine cut-off were also removed as unnecessary (although the version for the Navy, as in the photo on the right, kept it), and the magazine chain mount was also removed soon after the adoption.

Introduced in 1907, the Lee-Enfield No. 1 Mk III was the official battle rifle of British and Commonwealth forces during the First World War. It was an updated version of the Mk I, featuring a more durable charging bridge instead of the original folding clip guides, and changed sights. The cut-off was returned again, primarily for safety purposes.

The No. 1 Mk III* was a simplified variant of the Mk III; changes include the magazine cutoff, volley sights and windage adjustable rear sights being removed and a different cocking piece. It was designed for expedient production in 1915 and became the most numerous variant of the Mk III, seeing action throughout the 20th century. Despite the adoption of No. 4 rifle, production continued until the end of WWII, while Australian and Indian versions continued until about 1956 and 1974 respectively.

First placed in service with the British military in 1941, the Lee-Enfield No. 4 Mk I was the main battle rifle of British and Commonwealth forces during World War II. However, it was supplemented heavily with the older Lee Enfield No. 1 Mk III. The No. 4 can be distinguished from the No. 1 by its protruding barrel and redesigned iron sights. The Lee-Enfield No. 4 Mk I (T) is a sniper variant of the No. 4.

A further simplified version known as the No. 4 Mk I* was produced in Canada by Small Arms Limited, and in USA by Stevens-Savage Firearms in 1942, featuring a simplified bolt release catch.

A carbine version of the No. 4 Mk I designed in response to requests for a smaller, lighter rifle along the lines of the M1 Carbine for airborne troops in Europe. Much of its use came in post-war conflicts such as the Malayan Emergency, where it gained the nickname "Jungle Carbine". Designed with a number of lightening cuts to save weight and a distinctive flash hider, rubber buttpad and side-mounted sling. The lightening cuts were found to allow the rifle to flex during heavy firing, changing the point of aim; this lead to the discontinuing of production in 1947, whereas the No. 4 Mk 2 was produced until 1957 before converting to the L1A1.

The L42A1 is the last Lee-Enfield rifle to see service. Converted from existing No. 4 Mk I (T) rifles and rechambered for 7.62x51mm NATO, the L42A1 served in the British military until 1992, when they were replaced by the L96A1.

The Enfield Enforcer was a police version of the L42A1. It differed from L42 by having more sporterised buttstock with semi-pistol grip and integral cheeckpiece.

The Ishapore 2A1 is an Indian version of the Lee-Enfield chambered in 7.62x51mm. It was produced between 1962 - 1974 and is currently still in service with some units, mainly Indian police. It is worth noting that they are now being actively replaced by modern weapons, but a small number are left in police reserve. 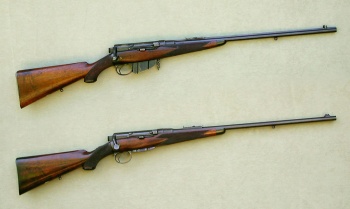 The Lee-Speed was popular with British officers and other hunters who wanted a fine rifle, but couldn't afford the expensive double barrel rifles made by Purdy, Holland & Holland and other famous, and expensive, British gun makers. The Lee-Speed was popular because it fired the easily obtainable British service round (.303 British), though it was also manufactured in other calibers. The Lee-Speed had the same action as the Lee-Enfield bolt action rifle, which allowed many British hunters and colonists in Africa to obtain spare parts and ammunition from British Army units based in Britain's African colonies during the late 19th and early 20th centuries.

Initially, Lee-Speed was produced in military carbine configurations for officers wishing to have a higher-class combat weapon, but later, the sporter models were also introduced.

After the expiration of the patent, the rifle was no longer marked, so technically the Lee-Speed did not exist after 1918, but the nickname stuck, and all BSA and LSA factory athletes received the name Lee Speed.

The Howell Automatic Rifle was a prototype semi-automatic conversion of the Lee-Enfield Rifle designed during the Great War by Nigel Howell. It came in the 10 round capacity of the original rifle or a new 20 round capacity (which was also subsequently issued as a high-capacity "trench" magazine for standard SMLE). It had an external gas tube (that operated the bolt in the brutally simple method of a curved cam that literally rotated and pushed the original, largely unmodified bolt) and a pistol grip on the stock.

In the 1940s, American engineer Russell J. Turner developed a prototype semi-automatic conversion for the SMLE. The conversion utilized a long piston gas system and was hammer-fired. Unlike contemporary semi-automatic Lee-Enfield conversions, the weapon had no external gas tube.

The Charlton Automatic Rifle, like the Howell Automatic Rifle and the Turner SMLE, is another automatic conversion of the Lee-Enfield rifle. Designed by New Zealander Philip Charlton (with assistance from Maurice Field) in the early days of WWII, the Charlton is fully automatic and can also use Lee-Metford rifles as a base. Charlton and Field presented a prototype of the conversion to the government in 1941, and received a contract to convert Lee-Metford and Enfield rifles into automatic rifles for Home Guard use. However, production ran into several difficulties, particularly with magazines, with the intended modified Bren gun magazines arriving late and then found out to be unable to fit. Most Charltons thus only had standard Lee-Enfield 10-round magazines and only the last 50 guns delivered had the 30-round Bren Gun magazines. The Australian government also contacted Charlton to convert their rifles, resulting in prototypes done by the Australian branch of the Swedish company Electrolux with a different external design, lacking the front grip and bipod.