11-11: Memories Retold is an Adventure game in which the stories of two soldiers on different sides of the front in the First World War are told. It is brought to life by a unique painting graphic style and follows the story of the young Canadian photographer Harry (voiced by Elijah Wood), who joins the army to impress a girl, and the German Farmer Kurt (voiced by Sebastian Koch), who is looking for his missing son.

Note: The screenshots seen here will be of varying sizes due to the change in aspect ratio throughout the game.

The following weapons appear in the video game 11-11: Memories Retold:

Major Barret is seen with a Webley .455 Mk VI. First seen in the Vimy mission and later in the Passchendaele mission as he goes over the top. Later, Kurt also uses his revolver. 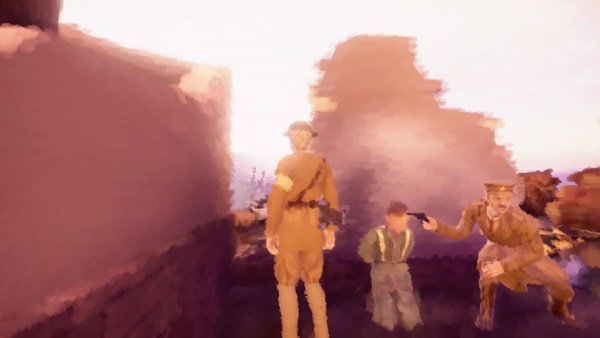 Major Barret holds his Webley at a German prisoner while posing for a photo.

During a trench raid he holds it at Lothar. 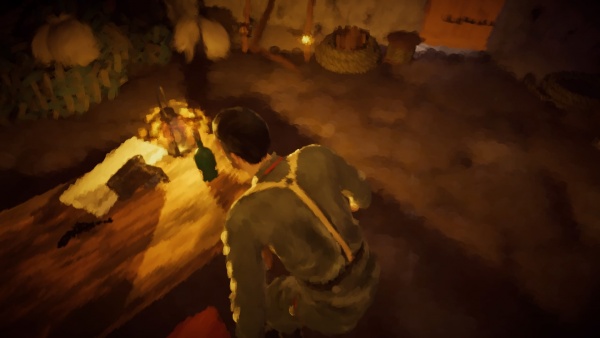 The Webley lies on the table next to Kurt.

After disarming Barret, Kurt holds the revolver on him.

Right view of the revolver during a different ending.

The Lee-Enfield No.1 Mk.III* is the standard rifle for Canadian troops. During the Somme mission, French soldiers can also be seen armed with SMLEs instead of Berthier or Lebel 1886 rifles. At least one German soldier in the Passchendaele mission carries one. During the "consequences" mission Kurt has to avoid some British snipers (only the glimmers of the scopes are seen). 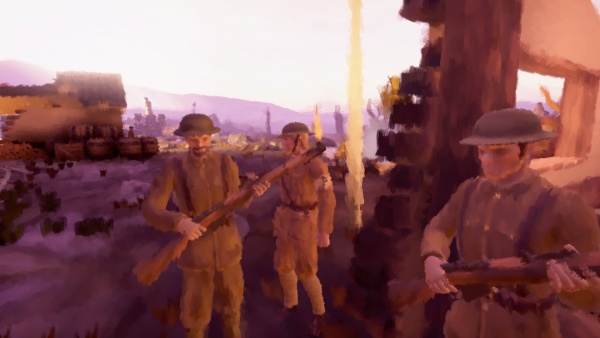 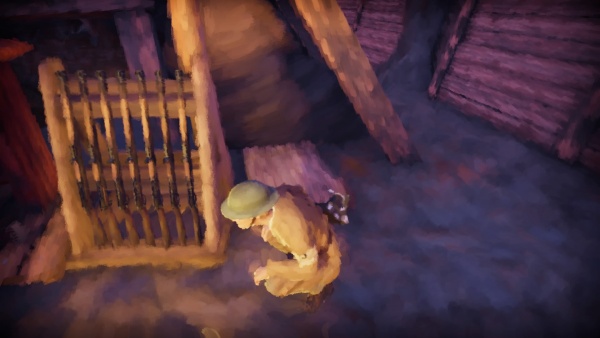 Harry next to some SMLEs as he is stationed at Vimy.

A French soldier holds his Lee-Enfield and watches the Somme No Man's Land. 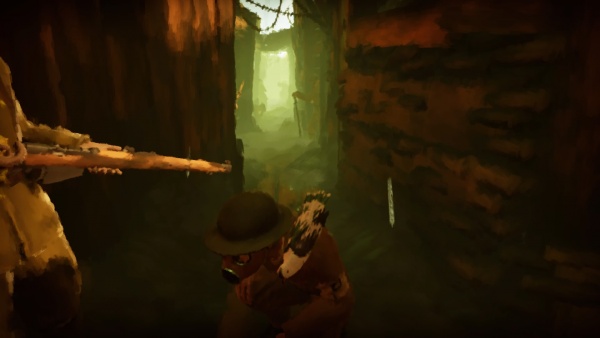 A Canadian checks his rifle in a Passchendaele trench full of Poison Gas. 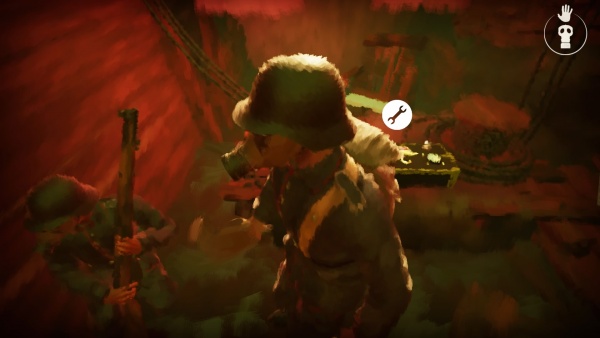 A German soldier next to Kurt carry his British rifle.

German soldiers use Mauser Gewehr 1898 rifles throughout the game including Kurt during the Tunnel mission. Some of them are equipped with sniper scopes (possibly with the Glasvisier 16 scope, due to the position on top of the rifle). 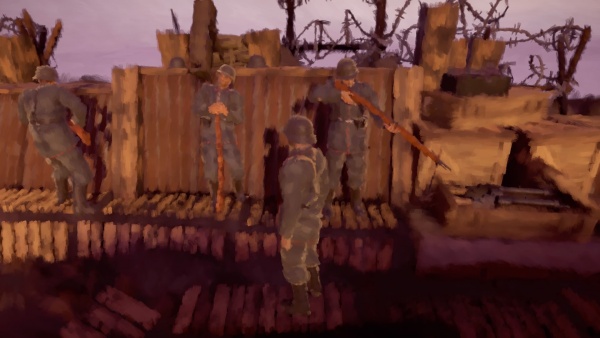 Three German soldiers with their Gewehrs in a Vimy Ridge trench. The one on the right inspects his rifle. 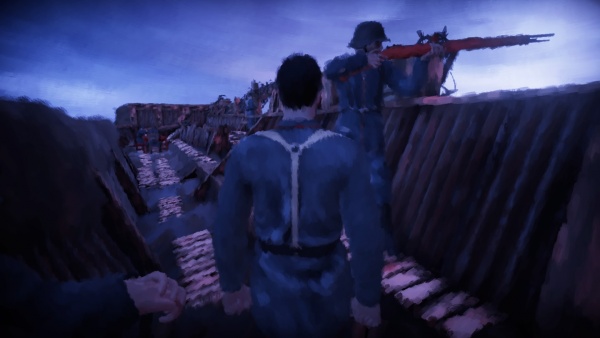 Another German aims into No Man's Land. 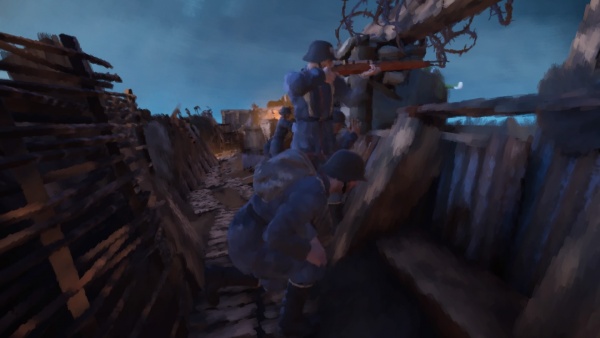 Kurt holds a G98 at Harry while stuck underground.

German soldiers hold their rifles at Harry at the end of the Passchendaele mission.

A Mauser 98 Sporter rifle can be seen hanging on the wall in Kurt's house. Harry uses this rifle during the last mission and calls it simply "Hunting Rifle". 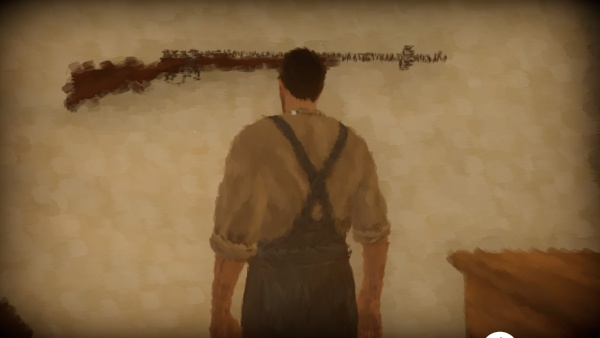 The rifle seen on the wall in the kitchen. 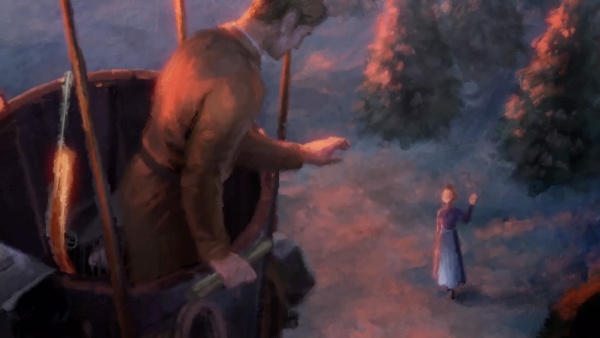 Harry next to the rifle during a cutscene. 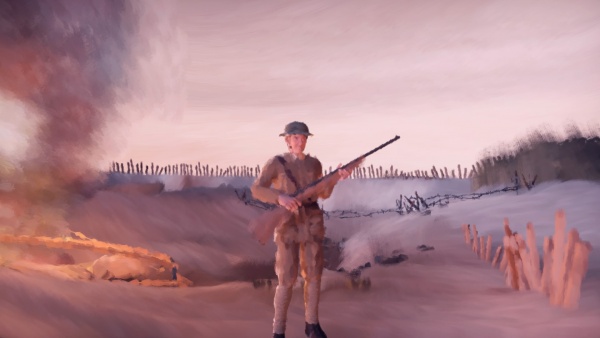 Later, he holds the rifle.

He holds the rifle at Major Barret.

In a different ending, he aims at Kurt.

A probable Lewis Gun can be seen during the Passchendaele mission in a bunker in No Man's Land. 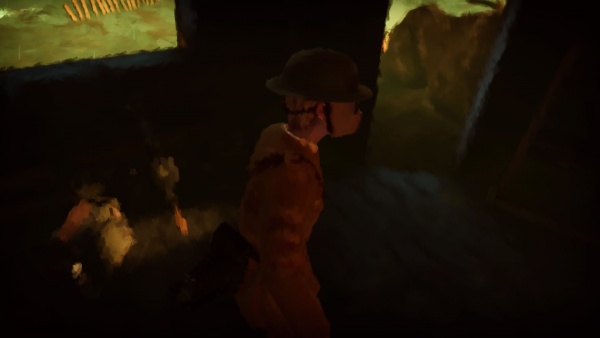 Harry next to the Lewis. Note the top mounted round magazine.

The standard German machine gun is the Maxim MG08/15. During a British attack, Kurt has to fetch water for one in the Vimy mission. 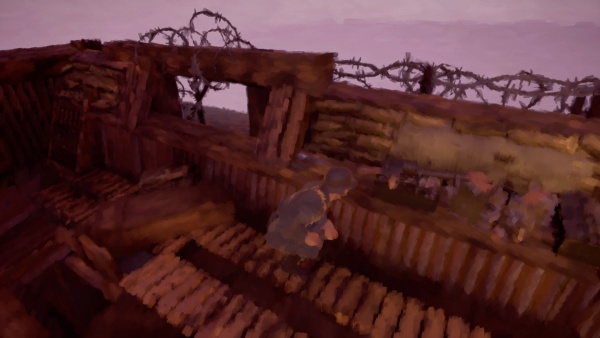 Kurt next to Maxim in the Vimy trench.

A Sopwith fighter plane can be seen with mounted Vickers Aircraft Machine Guns at the train station. 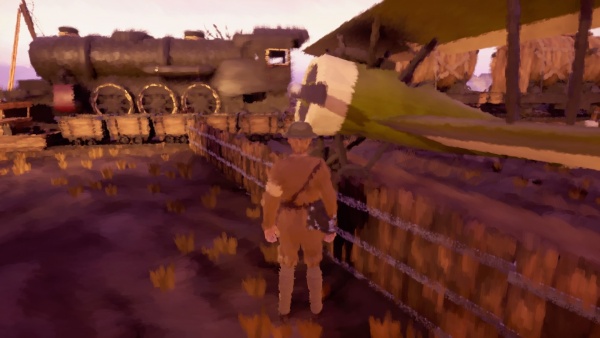 Left view of the plane. 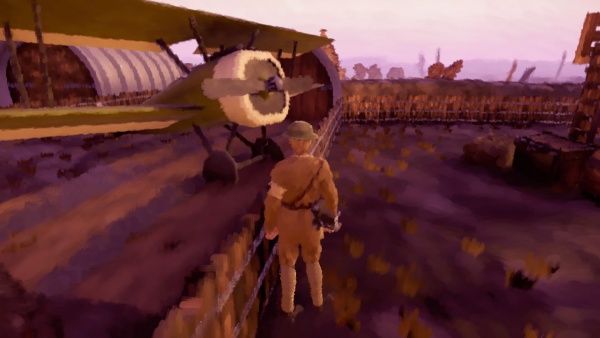 What appears to be Model 16 Stielhandgranates can be seen in crates in Vimy Ridge and a Passchendaele trench. 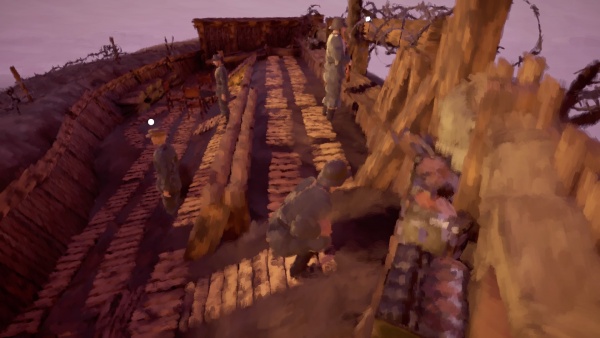 Kurt stands next to the crate in the Vimy trench. 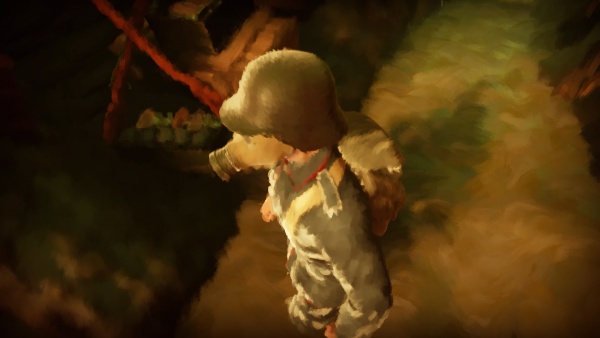 So he does in the Passchendaele trench.

The 9.15 cm Minenwerfer can be seen used by German soldiers. 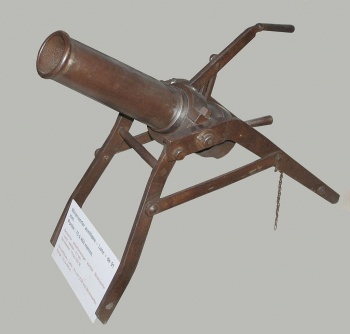 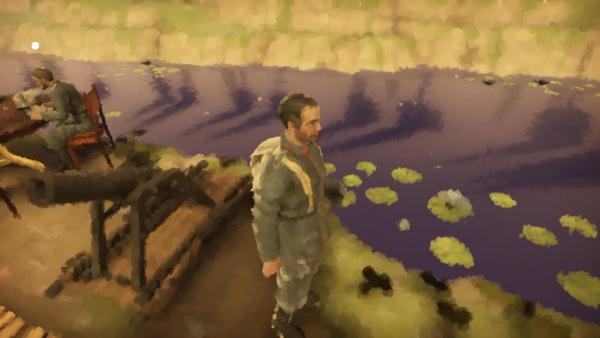 An unused Minenwerfer next to Kurt. 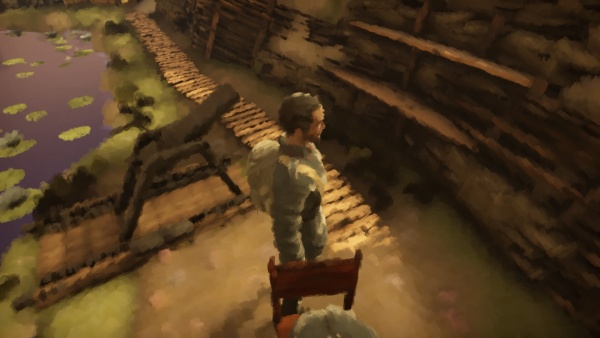 The other side of the mortar. 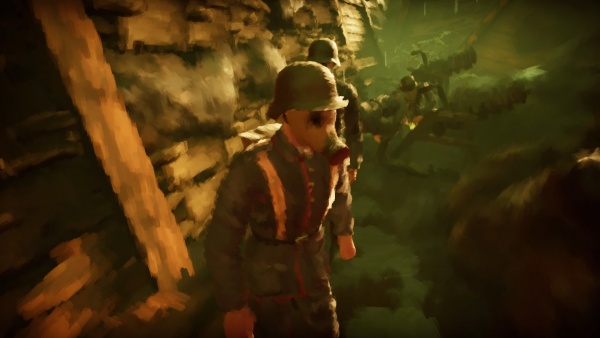 German soldiers fire a Minenwerfer in the background.

Some 21 cm Mörser 10 howitzers can be seen in a cutscene.

BL 6-inch Mark VII howitzers can be seen through the story campaign. 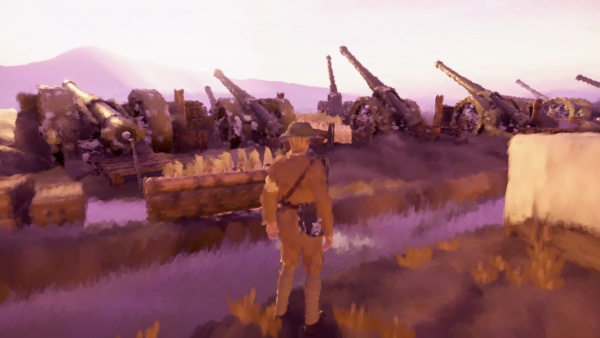 The Major stands next to a howitzer. 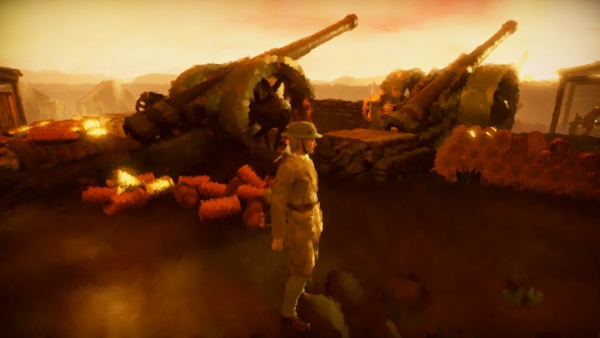 Other howitzers in a British position at the Somme.

ML 9.45 inch "Flying Pig" mortars can be seen on Allied positions. Unlike its German counterpart, it cannot be seen fired. 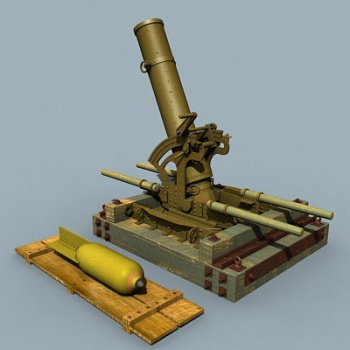 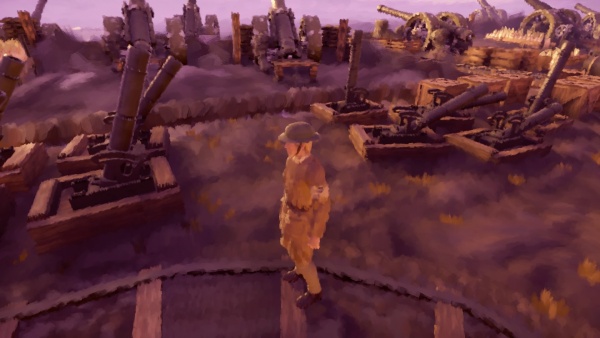