North West Frontier (known in U.S. theatrical and VHS releases as Flame over India) is a 1959 adventure film directed by J. Lee Thompson. The movie is set in India during 1905. British Army officer, Captain Scott is given the responsibility of escorting a young Hindu prince to safety in the midst of a Muslim rebellion as his survival will ensure the failure of the uprising. The only feasible way to evacuate the boy, his American nanny and a number of other passengers is by an old locomotive over miles of hostile terrain in the hands of the rebels intent on ending the prince's bloodline.

The following firearms were used in the film North West Frontier:

Capt. Scott has a .455 Webley Mk V revolver as his personal sidearm. It is possible that Scott's sidearm is a Mk. I, Mk. II or Mk. IV (not to be confused with the .38 Mk. IV) Webley, the differences between the models mentioned are aesthetically minimal. However, it is difficult to tell which exact model is used since there are only a few glimpses of the revolver in action scenes and the grain of the film obscures the finer details. Historically a Mk. I, Mk. II or Mk. IV would be correct, the Mk. V not having been adopted until 1913. A Mk. III is also a possibility and would mean that Scott had purchased his own sidearm rather than it being issued to him since the Mk. III was a commercial endeavor not fully adopted by the British military. 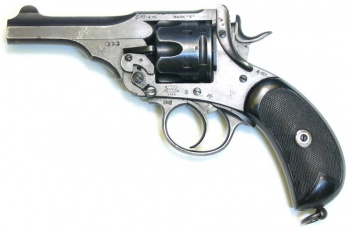 Scott struggles with Van Layden on the roof of the train.

In one scene, Scott's sidearm changes to a Webley Mk VI revolver, characterized by a longer barrel and a squared-off grip as opposed to a bird's-beak grip as seen on earlier models. This is a minor anachronism as well as a continuity error as the Mk. VI was not in production until 1915.

Capt. Scott investigates a train station with his Webley drawn.

The Lee-Enfield No. 1 Mk III* is seen in the hands of British and Indian soldiers throughout the film as well as in the hands of the rebels and the civilian passengers of the train. The SMLEs that are seen all appear to be of the Mk. III variety which were not in service until 1907. In 1905 troops would be issued with the Mk. I SMLE or earlier models such as the Lee-Enfield Mk. I (Long Lee-Enfield) or Lee-Metford. Given the difficulty of obtaining more correct versions of what is essentially the same rifle, this mistake is more than excusable.

A rebel fires his Lee-Enfield at Scott and his party as they flee.

Mr Peters (Eugene Deckers), an arms merchant, is given a Lee-Enfield by Scott who apologizes that it is made by a rival firm.

Mr Bridie (Wilfrid Hyde-White) tells Capt. Scott of the time he won a cigarette case on Brighton Pier with a rifle.

Bridie demonstrates that he shan't be winning many more prizes with his shooting as he fumbles with his SMLE and accidentally fires it through a window shutter.

Mrs. Wyatt shot Layden at roof of train from a Lee-Enfield No. 1 Mk III* rifle.

Some soldiers and rebels can be seen with Lee-Enfield No. 4 rifles. This is a grave anachronism as the No. 4 was not fully accepted into service until 1941, 36 years after the film takes place.

An Indian soldier carrying a Lee-Enfield No. 4 helps Prince Kishan's nanny, Mrs Wyatt (Lauren Bacall) off her horse under fire.

A pair of .303 Maxim guns are mounted on the train for defense against hostile rebels along the journey. 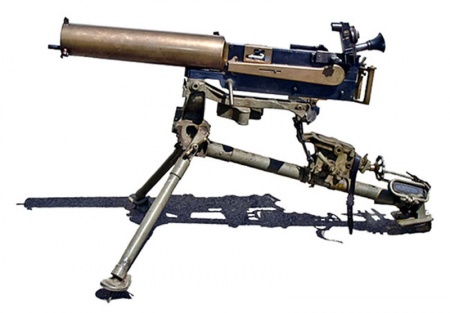 A Maxim is used against rebels attacking from the hills.

Peters attempts to fix a malfunctioned Maxim. He is frustrated that the British buy these guns because the machine guns his firm sells are much better.

In some instances, Rebels can be seen carrying what appear to be muzzle-loading muskets into action. From their appearance they could be dummies made for the film. Interestingly, there was, and still is a large gunsmithing tradition in the North West Frontier province. Crude copies of captured British firearms were made through cottage industry along with traditional oriental musket designs. The quality of such firearms is notoriously poor and they are generally considered unsafe to fire with modern ammunition.

Rebels move into position with their muskets.

During the defense of Haserabad in the film's opening, Quick-Firing 2.95 inch Mountain Guns (pack howitzers) are used against attacking rebel forces. These guns were used extensively by colonial forces in the British Empire but were not officially adopted for British Army service. 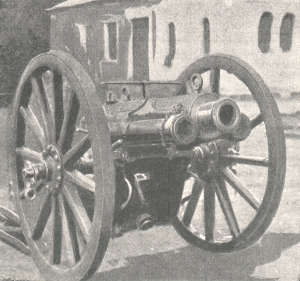 An empty shell casing is ejected from the breech.

A muzzle-loading cannon is seen on the walls of Haserabad when the town is under attack. Since the film was shot in Spain this could be a locally made example. Such a cannon would be considered obsolete by 1905 with the advent of quick-firing artillery, however there is no doubt they would still prove useful in a desperate situation such as this.

The cannon prior to firing at the approaching rebel army.
Retrieved from "https://www.imfdb.org/index.php?title=North_West_Frontier&oldid=1316297"
Categories: