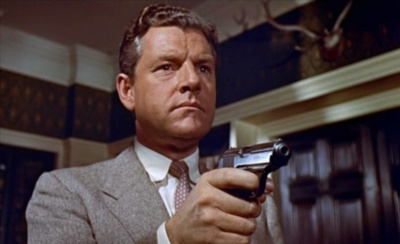 Kenneth Gilbert More, CBE (September 20, 1914 – July 12, 1982) was a well known British screen and stage actor. He started his theatre career in mid-1930s. During the WWII, More received a commission as a lieutenant in the Royal Navy and served aboard the cruiser HMS Aurora and the aircraft carrier HMS Victorious. In his post-war acting career, More achieved success in the leading roles Genevieve (1953) and Doctor in the House (1954), and received a BAFTA Award as best newcomer. Among his other best known works are The Deep Blue Sea (1954), Reach for the Sky (1956), A Night to Remember (1958). However, in 1960s More suffered the decline in film popularity but was still successful on West End stage. In 1970, More was appointed a Commander of the Order of the British Empire (CBE). He passed away in 1982 due to Parkinson's disease, aged only 67.