Coast of Skeletons is a 1965 (filmed 1964) British-South African adventure movie directed by Robert Lynn, a sequel of 1963 film Death Drums Along the River. The movie features the main character of Edgar Wallace's 1911 novel "Sanders of the River" and the 1935 film of the same title by Zoltan Korda, although the plot is totally different. Harry Sanders (Richard Todd), British police Commissioner in West Africa, retires from service after the African colony gets independence. He is hired by the insurance company to investigate the diamond operations on the Coast of Skeletons in the South West Africa (modern-day Namibia), carried out by the shady tycoon A. J. Magnus (Dale Robertson). During the voyage, Sanders meets the skipper of Magnus' ship Janny Von Koltze (Heinz Drache), former German U-boat officer who seems to have his own goals in the explorations on the offshore waters.

The following weapons were used in the film Coast of Skeletons:

Commissioner Sanders holds his revolver in the opening scene, shooting in air in order to drive away an angry rhino.

Sanders (at the right) carries his revolver in holster. Inspector Tom Hamilton (Derek Nimmo) (at the left) also carries a holster but it's impossible to say if there is a gun inside.

In the climactic scene Sanders draws his revolver in order to shoot off the lock of the cargo hold.

Sanders fires. The lanyard ring of his revolver can be seen.

Sanders holds his revolver during the shootout with Magnus' henchman Carlo Seton.

Sanders carries the revolver tucked into his belt. The medallion can be seen on the grips. 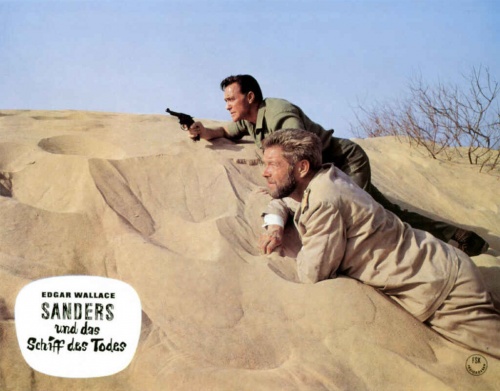 Sanders holds the revolver on a German lobby card.

Piet Van Houten (Dietmar Schönherr) carries a bright nickel plated Single Action Army "Artillery" Model revolver with smooth wood grips. The revolver may be one of the German replicas produced by Sauer, Reck and other manufacturers, often chambered in .22 caliber. 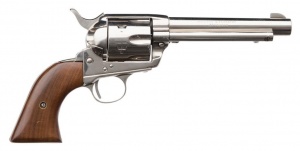 He aims the revolver.

Piet holds the revolver during the uneasy discussion.

The revolver is seen from the muzzle.

One more view of Piet's revolver. 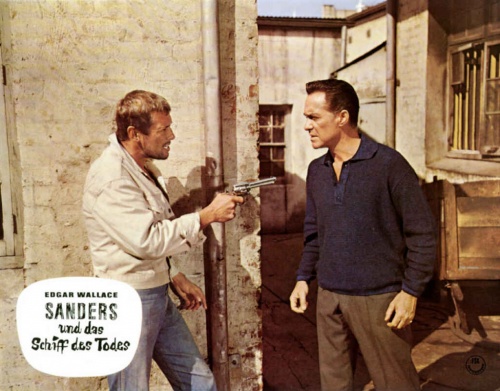 Piet Van Houten aims his revolver at Sanders on a German lobby card. 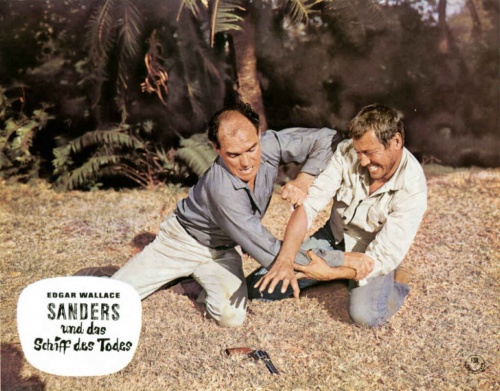 The revolver lies on the ground during the struggle between Piet and Carlo Seton. It has smooth wood grips. In the film itself, the revolver in this scene falls below the bottom margine of the screen.

Due to a continuity error, Carlo Seton's (George Leech) Luger P08 switches to a Colt revolver during the final shootout. The exact model is unclear; Colt Official Police or Colt Police Positive seem to be good guesses.

Carlo draws a revolver instead of previously seen Luger.

Carlo fires his revolver during the shootout with Sanders. 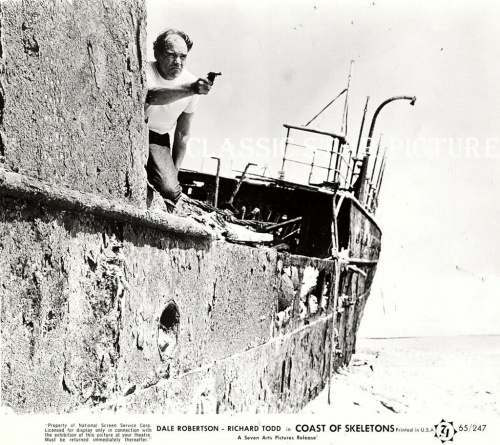 Carlo's revolver is seen on a promotional image. The unsupported ejector rod allows to identify the revolver as a Colt model. 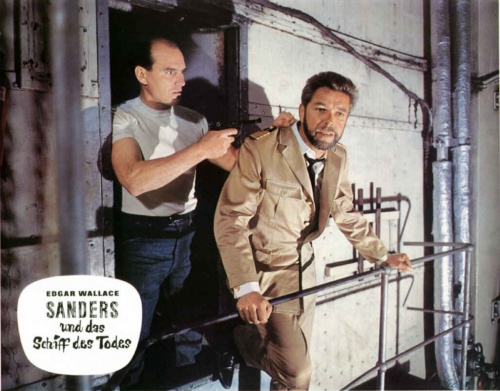 Carlo holds Von Koltze at gunpoint with his Luger on a German lobby card.

In the opening scene two native police constables under Sanders' command are armed with Lee-Enfield No.1 Mk.III rifles.

One of the constables holds a rifle during the operation against poachers.

The rifle of the second constable is seen.

Constables with rifles convoy arrested poachers to the car.

One more view of an SMLE at the far left.