The film is the fifteenth installment in the Rialto Film studio film series (1959-1972) adapted from the novels of Edgar Wallace, and the second screen adaptation of the original novel, following 1938 British film Mr. Reeder.

The following weapons were used in the film Room 13 (Zimmer 13):

Joe Legge draws his revolver when he appears in Marney's estate in the opening scene.

Johnny Gray draws his revolver when he hears a suspicious sound.

Another view of Gray's revolver.

Legge fires his revolver in the climactic scene. In the next moment, his revolver switches to an Arminius HW-1.

Johnny Gray (Joachim Fuchsberger) carries an Arminius HW-1 revolver throughout the movie, except for the opening scene when he is armed with an NHM Model 9 revolver. In the climactic scene Joe Legge's (Richard Häussler) NHM Model 9 switches to an Arminius.

Gray holds his revolver when he and Denise escape from the night club.

Grey fires his revolver in the climactic scene.

Legge is gunned down and drops his revolver. In this scene, he holds an Arminius HW-1 instead of a NHM Model 9.

Police Inspector Terrence Banner (Curd Pieritz) carries a Walther P38. A P38 is also seen in the hands of a gangster.

Inspector Banner (at the left) holds a P38 in the scene in Legge's night club.

Another view of Banner's pistol.

A gangster in center draws a P38.

Another view of the gangster's P38.

A CZ 27 is seen in the hands of a constable in Legge's night club.

A constable in center holds a CZ 27.

In the scene in Legge's night club, a constable holds a pistol that appears to be a Vis wz. 35. A similar pistol is seen in the hands of a gangster during the train robbery. Similar pistols are used by at least one more gangster, and several constables during the arrest of the gang; these are also possibly Vis wz. 35s, but may be some other M1911-style guns. 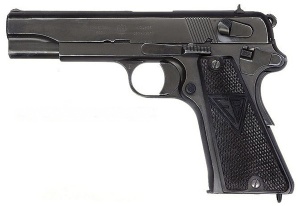 A constable holds his pistol.

Another view of the pistol. It seems to have a very small ring hammer spur, like Vis.

One of the gangsters draws an M1911-style pistol during the meeting of the gang.

During the train robbery a gangster hold a trackman at gunpoint.

The ring hammer can be seen. As far as it can be seen, the pistol has slide-mounted safety.

One of the constables holds an M1911-style pistol.

What seems to be a Luger P08 is seen in hands of a constable during the arrest of the gang.

What seems to be a Luger is seen in hands of a constable at the left.

Legge's gangsters are seen with Sten Mk II submachine guns when they prepare for the robbery. As the exterior scenes were filmed in Denmark, during the robbery, their Stens are replaced with Hovea M1949 submachine guns. Stens are also seen in the train transporting a large amount of cash.

Two Stens are seen behind the gangsters.

The gangsters prepare their weapons.

Stens are seen in hands of a tall gangster at the right and near the wall at the left.

One of the Stens of the train guards is seen on the wall at the right.

Hovea M1949 submachine guns are used by the gangsters during the robbery and the following shootout with police. When the money is loaded onto the train, police guards are also armed with Hovea M49s. Many of these SMGs are fitted with blank firing adapters.

Constables, guarding the train, hold Hovea M49 submachine guns. The blank firing adapter is seen in the muzzle of the SMG at the left.

A gangster with the Hovea M49 SMG climbs on the locomotive.

Blackstone (Benno Hoffmann) and other gangsters of his group are armed with Hovea M49s.

A good view of Blackstone's SMG.

Blackstone holds his SMG during the taking of the train.

A gangster stands on guard while others load the loot.

A gangster is gunned down and drops his gun.

Legge's henchman Blackstone-Edwards (Benno Hoffmann) uses a hunting or sporter rifle with sniper scope during the assassination attempt on Johnny Gray. Police expert Dr. Higgins claims that the rifle is chambered in 9mm caliber, but the slim barrel allows to guess that this is a rather small caliber gun.

He returns to his car with the rifle in hands. 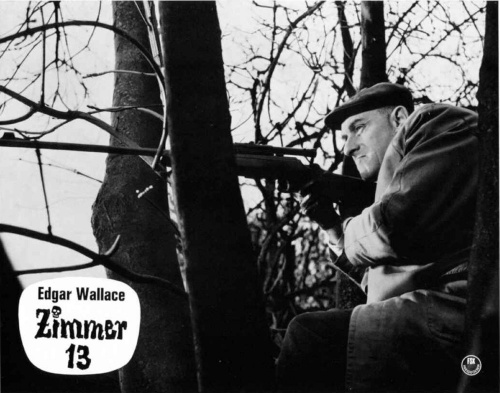 The rifle is seen better on a promotional image.

Ambrose is gunned down. 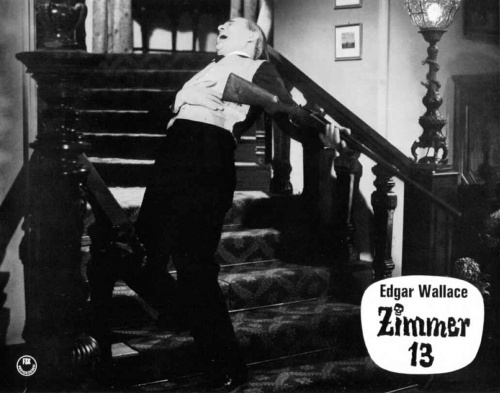 Ambrose's shotgun is seen on a promotional image.