From Internet Movie Firearms Database - Guns in Movies, TV and Video Games
(Redirected from The Green Archer)
Jump to navigation Jump to search

The Green Archer is a 1961 German movie directed by Jürgen Roland and the fifth Edgar Wallace film of the postwar period based on the 1923 novel of the same name. The American millionaire Abel Bellamy moves into his castle, Garre Castle near London, although he knows that the spirit of a green archer is up to mischief. It does not take long for the first casualties to be mourned. Inspector Featherstone of Scotland Yard can be smuggled into the property as a caretaker so that he can investigate undisturbed. But Bellamy's pretty niece Valerie is also investigated because she has a bad suspicion.

The following weapons were used in the film The Green Archer: 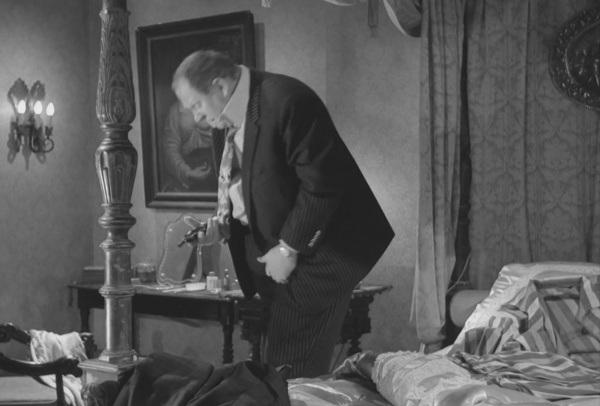 Abel looks at his revolver taken from his desk. 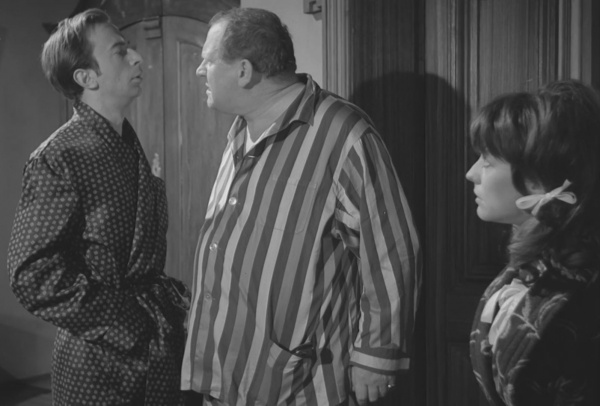 The grip is seen in the pajamas' pocket while Abel talking to Julius Savini (Harry Wüstenhagen). 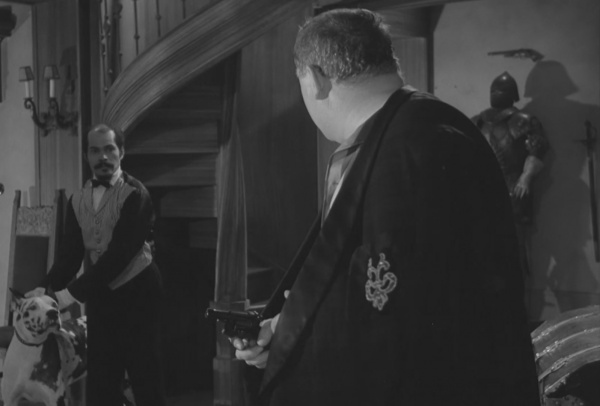 He brandishes his revolver after hearing strange noises. 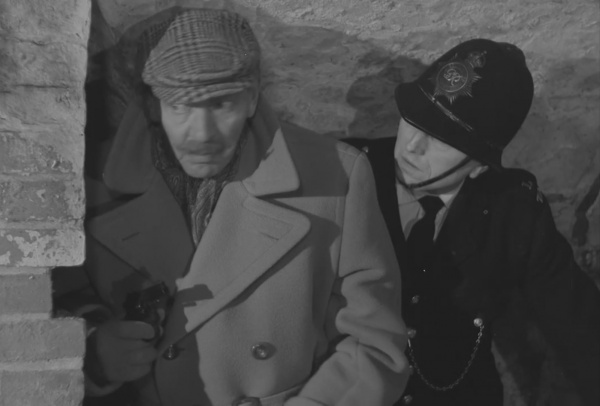 Sergeant Higgins with his revolver while hiding from suspects on the other side of the wall. 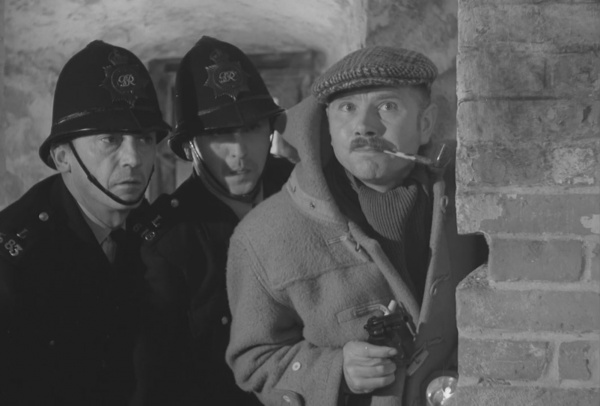 As it turns out, the suspects are police officers like Sergeant Bannister. 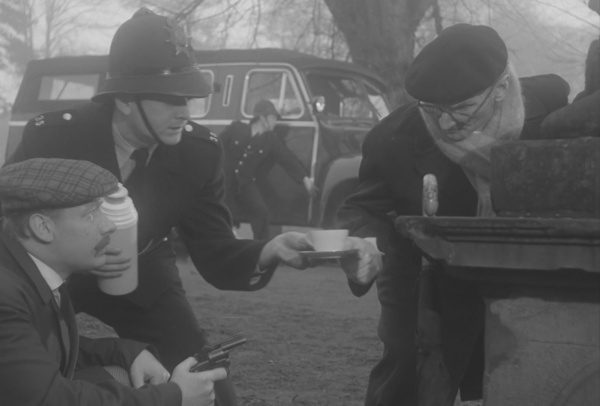 Higgins with his drawn revolver during the shootout while his supervisor complaining about the lack of cream in tea during the siege of Garre Castle. 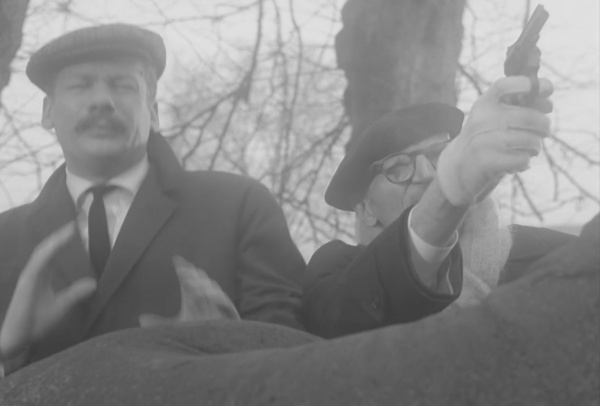 The supervisor fires the revolver. 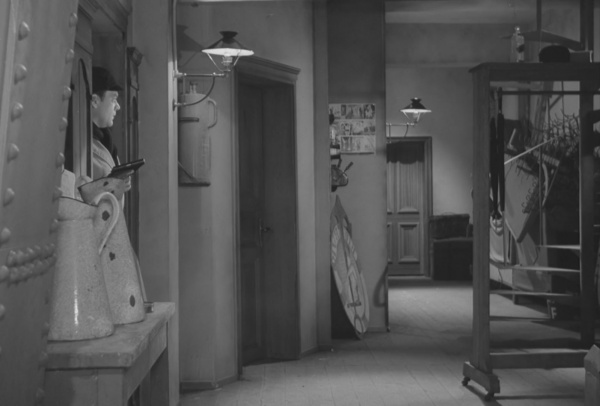 The first appearance of the HSc pistol on the left. 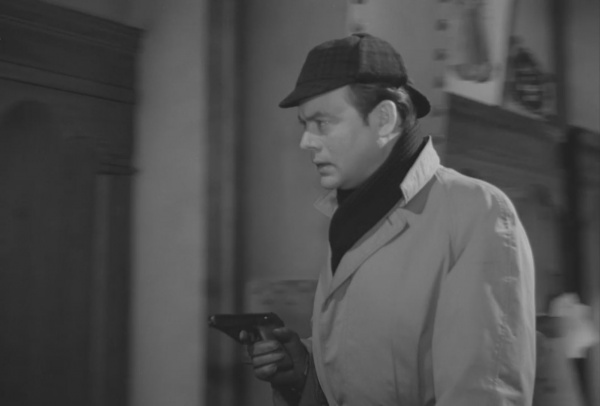 Closer view of his pistol while walking to a window. 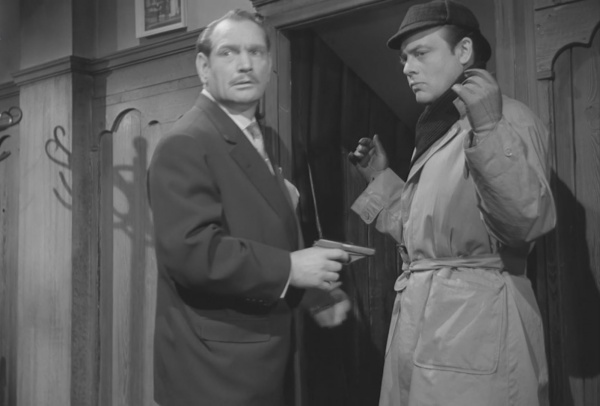 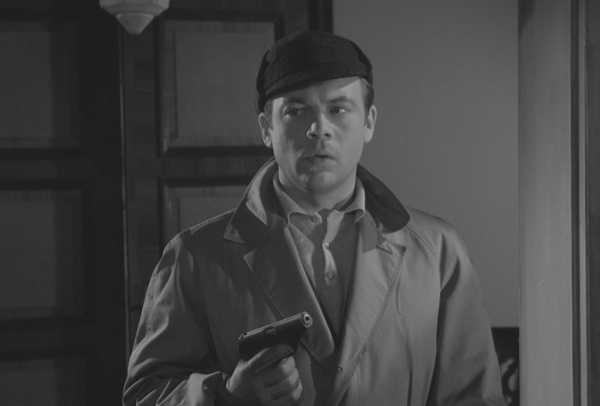 A Walther PPK is used by Coldharbour Smith (Stanislav Ledinek). This pistol is also seen in the hands of Spike Holland (Eddi Arent) and Inspector Featherstone. 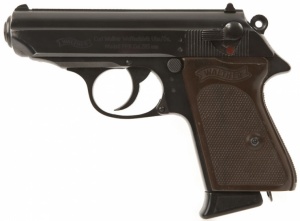 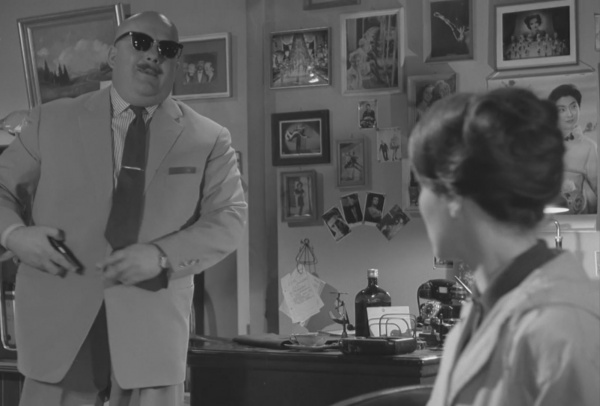 After taking the pistol from the drawer he unlocks it. 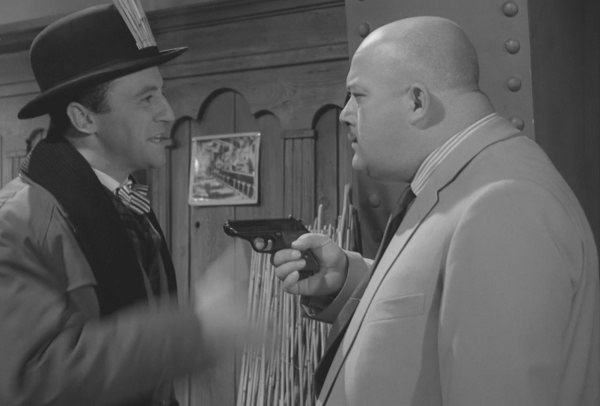 As a good gentlemen Spike would like to shake hands with Smith to introduce himself... 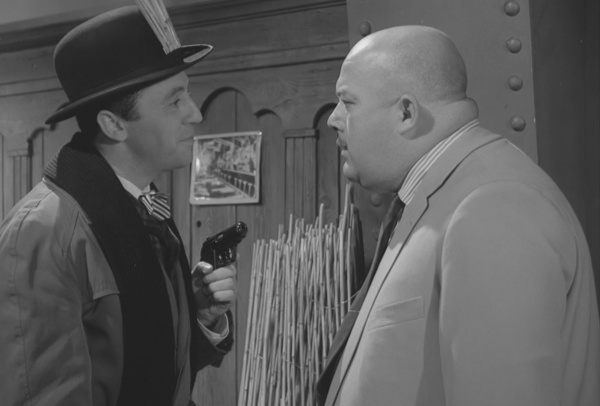 ...and accidentally took the PPK. 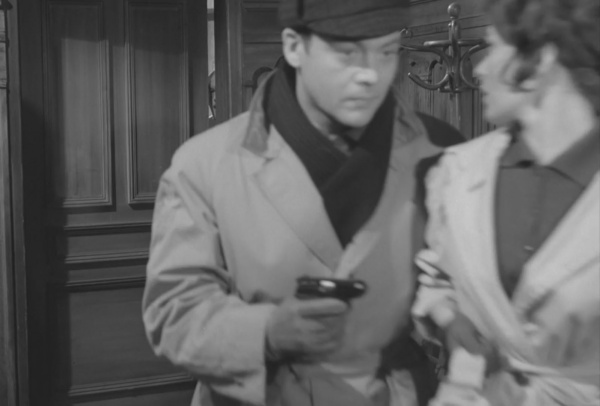 An antique pistol whose shape resembles a Wheellock Pistol is seen hanging on the wall. 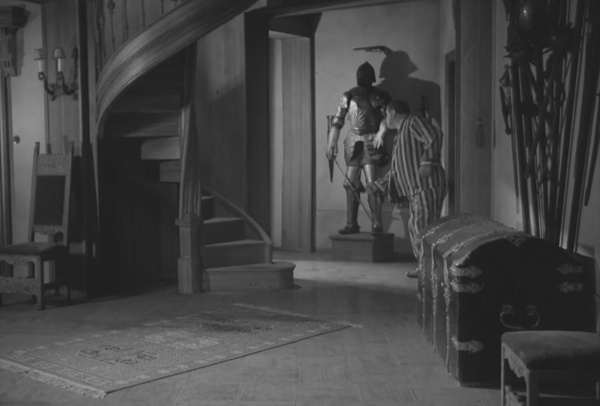 The pistol above the knight armor. 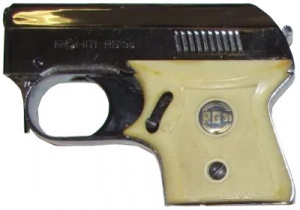 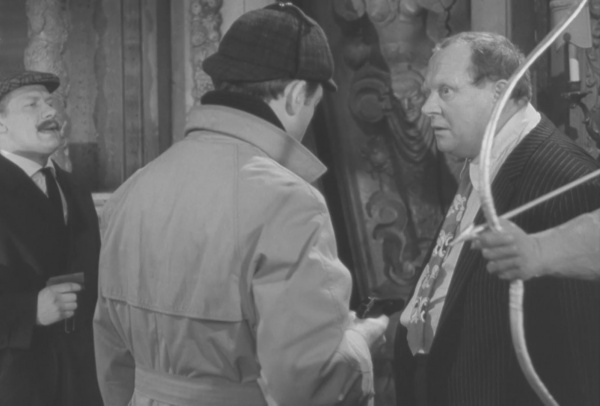 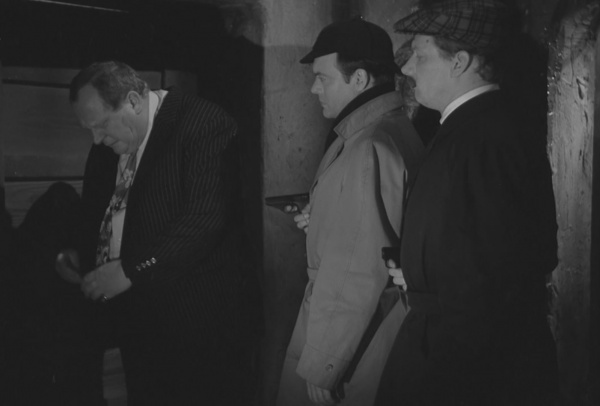 To the right, Higgins keeps pointing his pistol at him.

Abel Bellamy is seen cleaning a rifle that looks like a Steyr Mannlicher-Schoenauer Carbine. 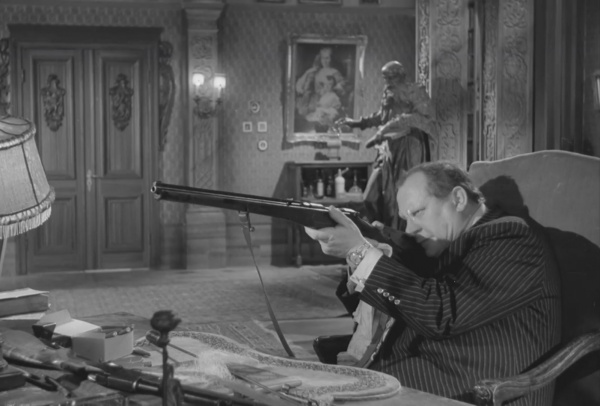 He checks the sights. 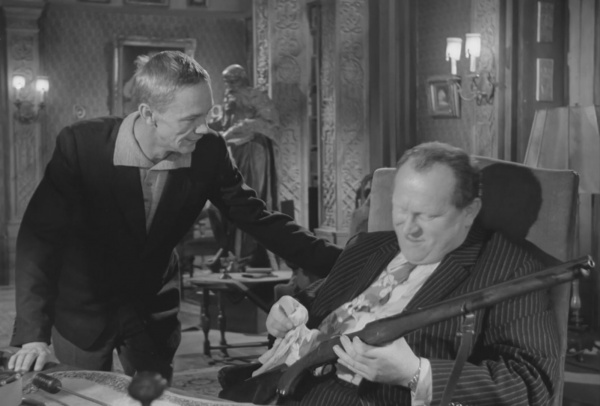 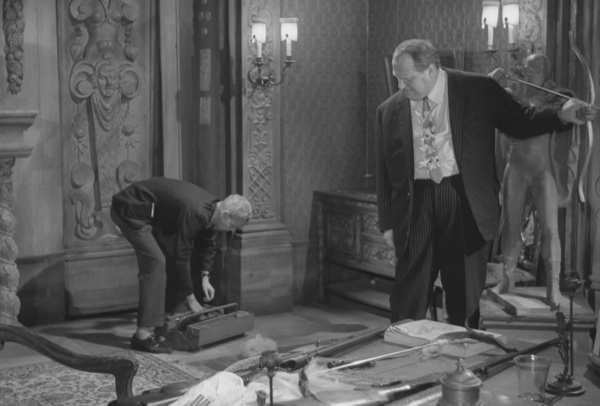 The rifle on the edge of the table. Another rifle is seen in the foreground. 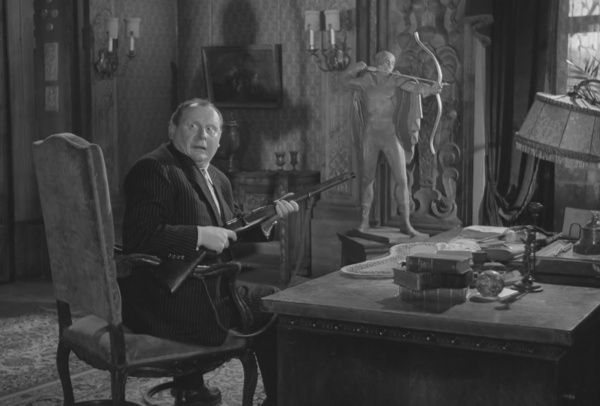 Frightened Abel holds the carbine while surprised by the Archer.

Other rifles of Abel Bellamy can also be seen. One is used by his servant Sen (Robert Hore). 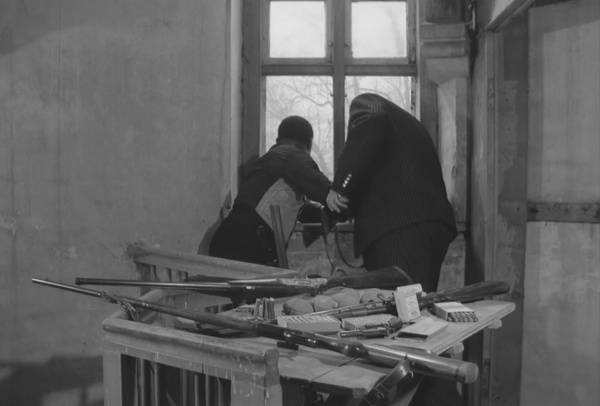 Three rifles on the table. The servant at the window aims different one. Abel's NHM revolver alongside ammunition can be seen among the rifles.