Death Drums Along the River

Death Drums Along the River is a 1963 British-West German adventure movie directed by Lawrence Huntington. The movie features the main character of Edgar Wallace's 1911 novel "Sanders of the River" and the 1935 film by Zoltan Korda, although the plot is totally different. Harry Sanders (Richard Todd), British police Commissioner in West Africa, investigates the diamonds trafficking. The investigation leads him to Dr. Schneider's hospital, located far from civilisation.

In 1965 a sequel Coast of Skeletons was released.

The following weapons were used in the film Death Drums Along the River: 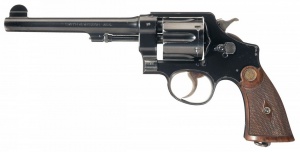 Sanders carries a holstered revolver. A small part of the grip can be seen.

Hamilton (at the right) carries a holster.

Sanders holds his revolver during the boat chase.

Sanders puts the revolver back in holster.

Sanders chases Weiss through the jungle.

During the boat chase sequence, Sanders' revolver switches to a different gun of unidentified model, and then back to his Smith & Wesson. It seems to have a ejector rod housed in a tube on the right side of the barrel, like Single Action Army but the frame with a raised upper back differs from SAA. Possibly this scene was partially re-shot in a different location with different props. Curiously, Sanders holds an SAA style revolver on the film poster.

Sanders holds a revolver. What appears to be an ejector rod housing is seen.

The raised upper back of the frame is seen. 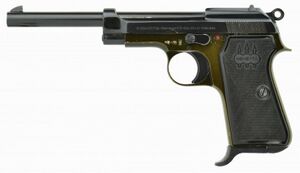 Weiss holds his pistol during the boat chase.

A close-up of the rear part of the pistol. 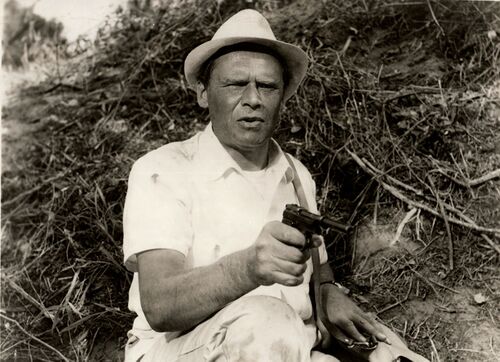