From Internet Movie Firearms Database - Guns in Movies, TV and Video Games
(Redirected from The Railway Man)
Jump to navigation Jump to search

The Railway Man is a 2013 British-Australian film directed by Jonathan Teplitzky. When Eric Lomax meets his future wife Patti, a new life begins for him. Nevertheless, he can not leave his presence behind. Drawn on what happened to him during his imprisonment during the Second World War, only his friend Finlay can understand what is going on inside him. When the latter presents him with a newspaper report about Eric's former tormentor Takeshi Nagase, who now manages a war museum, Eric has the opportunity to find a degree.

The following weapons were used in the film Railway Man, The:

Arisaka Type 38 Rifles are used by Japanese soldiers. Some are fitted with the Type 30 bayonet and the dust cover.

A Japanese soldier forces British soldiers to get out the HQ bunker of Singapore on February 15, 1942.

The Type 30 bayonet seen on the left as the PoWs lined up.

A slinged Arisaka with dust cover carried by a Japanese.

Another rifle during the scene.

British soldiers are seen with Lee-Enfield No.1 Mk.III*.

An ANZAC soldier on the right stands guard with his SMLE.

The Owen Submachine Gun is used by Austrialian paratroopers in Eric's (Jeremy Irvine) vision of his rescue. 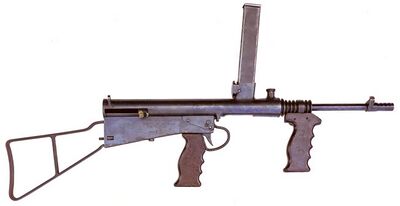 A paratrooper frees a PoW.

Another paratrooper does the same.

One of the paratroopers, who frees Eric, is armed with a Sten Mk II SMG.

The paratrooper on the right holds his Sten as he assembles Japanese Kenpeitai.

Eric can be briefly seen with a slunged Thompson M1928A1, again only in the vision.

Eric with the Thompson over his shoulder. Note the canvas holster for a Webley revolver carried by Young Finlay (Sam Reid) on the right.

A Type 97 Chi-Ha medium tank can be seen during the Fall of Singapore.