From Internet Movie Firearms Database - Guns in Movies, TV and Video Games
(Redirected from The Keeper (2018))
Jump to navigation Jump to search

The Keeper is a 2018 British-German movie directed by Marcus H. Rosenmüller. The film tells the story of Bernhard Carl „Bert“ Trautmann, who is imprisoned in a British camp after being captured at the end of World War II. When the coach of the provincial club St Helens Town notices his talent, he signs him up for his club. After having his first successes as a goalkeeper and falling in love with his patron's daughter Margaret, he decides to stay in England. Sometime later, Bert, as the English now call him, attracts the attention of Man City's team manager Jock Thomson. At "City", however, the hated "Kraut" faces a gauntlet. Under immense pressure from hostile media and massive fan protests, Trautmann fights for a fair chance.

The following weapons were used in the film The Keeper:

Sergeant Smythe (Harry Melling) is seen with a holstered Enfield No. 2 revolver. 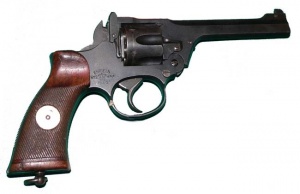 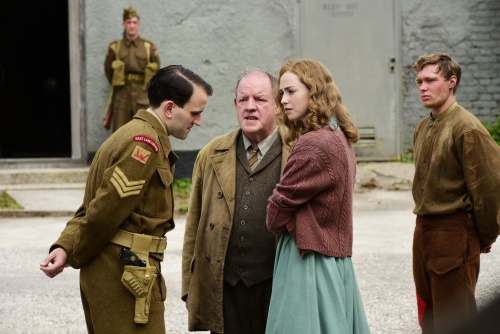 The revolver's grip glimpsing out the P37 canvas holster on a promotional picture.

A better view of the bottom of grip as he confiscates the football from the prisoners.

A Walther P38 is used by a Feldwebel (Sgt.) (Shenja Lacher) during Bert's flashback.

The officer starts aiming at a running child.

After a confrontation with Bert he changed his aim to him.

A front view of the muzzle.

A close-up of one MP40 resting on the legs of its owner.

Two German soldiers wielding their submachine guns through the woods.

At the beginning of the movie, Bert Trautmann (David Kross) and several other German soldiers use Karabiner 98ks.

Bert (center) and two soldiers sitting in a cave with their carbines. Note the Heer uniforms; as a member of the Fallschirmjäger-Regiment 1 der 7. Flieger-Division paratrooper division, the soldiers would have worn different uniforms. At least the shoulder board as Feldwebel (sergeant) suits him.

His squad spreading out into the forest.

The leading soldier holds his Karabiner at the ready.

Bert taking position behind a tree checks the environment for hostiles movement.

A closer view of one Kar98k cleaned by a German soldier in the flashback.

British and also a few German soldiers can be seen carrying Lee-Enfield No.1 Mk.III* rifles. Actually, in 1945, British forces would have been equipped mainly with the improved Lee-Enfield No.4 Mk 1* (entered service in 1941), but there are also pictures showing that the No.1 Mk. III* was used at the front until the end of the war.

British soldiers discover the shellshocked Bert and take him prisoner. In reality, Trautmann deserted afterwards the bombing of Kleve and wanted to escape to his hometown Bremen. On March 27, 1945, British soldiers captured him in a barn. While trying to escape fearing he would be executed he jumped over a fence right in front of a British soldier, who greeted him with the words "Hello Fritz, fancy a cup of tea?". This scene was introduced as a cinematic element to show the seriousness of the war. 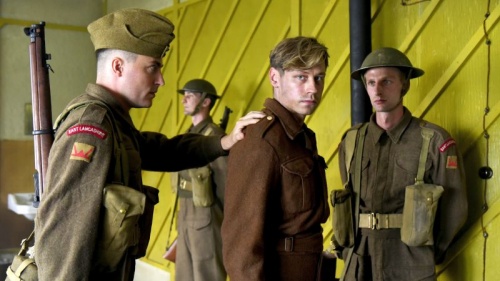 A promotional picture of a British soldier taking Bert away after the interrogation.

Bert is held back by two soldiers, carrying SMLE over their backs. Note the "East Lancashire Regiment" badge seen on the soldiers' uniforms.

A Re-education newsreel was shown to the German prisoners, which includes a British soldier holding a Lee-Enfield No.4 Mk 1* rifle.