October Gale is a 2014 drama starring Patricia Clarkson as Helen Matthews, a Toronto physician mourning the death of her husband (played by Callum Keith Rennie in flashbacks), who returns to their island cottage on Lake Huron where her husband died. Scott Speedman plays William, a man who shows up at her cabin with a bullet in his shoulder. William is an ex-con who served time for the manslaughter of his stepbrother. Tim Roth is the vengeful father who pursues him to the cabin where a final confrontation occurs. Filmed entirely on location on Georgian Bay, Ontario in the spring of 2014.

The following weapons were used in the film October Gale:

Tom (Tim Roth) carries two pistols. One of which is a Glock 17. 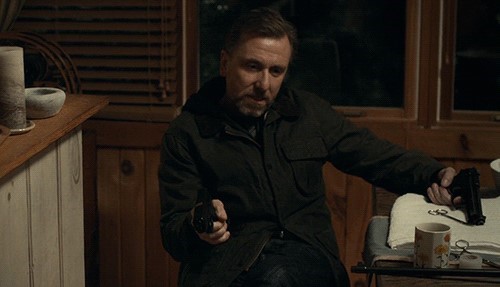 Tom's other pistol is a Beretta 92FS.

Helen (Patricia Clarkson) retrieves her late husband's rifle after William arrives. The rifle appears to be a Sporterized Lee-Enfield.