Me and my Demon (Nenu Naa Rakshasi)

Nenu Naa Rakshasi (English: Me and my Demon) is a 2011 Indian action film. Abhimanyu (Rana Daggubati) is the most professional assassin. Suddenly he falls in love with a mystical young woman, named Meenakshi (Ileana D'Cruz) and he finished his criminal career. But cruel outlaw Ratna (Abhimanyu Singh) wants revenge Abhimanyu for murdering his father and brother. Main hero must again take up arms to protect himself and his truelove.

PS Rakshasi is the female demon in the Hinduism.

The following weapons were used in the film Me and my Demon (Nenu Naa Rakshasi):

Abhimanyu (Rana Daggubati) personal firearm is the Beretta 92FS Inox. He carries it throughout the movie and uses it many times.

Abhimanyu fires his beretta at police.

Ratna (Abhimanyu Singh) uses the Beretta 92F/FS throughout the movie.

Bodyguards of the local criminal boss can be seen using the Beretta 92 style pistol at the film beginning.

At the film ending Abhimanyu tries to shot himself by the Walther P99, that he takes from killed Ratna (Abhimanyu Singh). Meenakshi (Ileana D'Cruz) disarmed him. 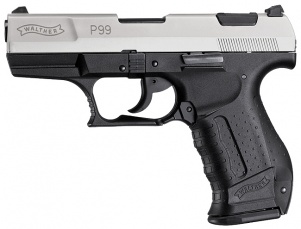 Indian police can be seen armed with the Ishapore 2A1 rifles.

Police takes aim with their rifles at Abhimanyu.

The shot was blured due the moving.

Abhimanyu fires the Winchester Model 70 rifle at his memories.

Abhimanyu uses the Blow Crazy mocked up as sniper rifle at the many scenes. 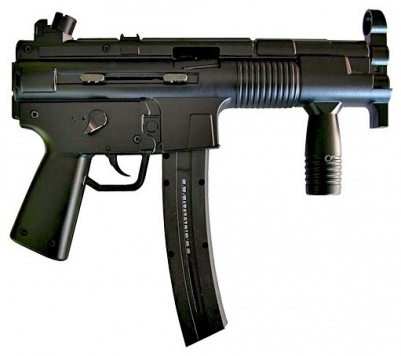 Body of the weapon.

Close view of the fake muzzle.

Close view of the gun barrels.
Retrieved from "https://www.imfdb.org/index.php?title=Me_and_my_Demon_(Nenu_Naa_Rakshasi)&oldid=958544"
Categories: