Dhoom is a 2004 Indian crime action comedy. This movie has two sequels: Dhoom 2 and Dhoom 3.

The following weapons were used in the film Dhoom: 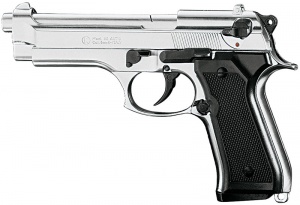 Perfect view of the pistol.

Police can be seen armed with the Lee-Enfield No.1 Mk.III* rifles.