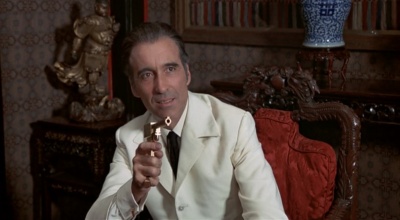 Sir Christopher Frank Carandini Lee (May 27, 1922 – June 7, 2015) was a British-born actor. Lee was incredibly prolific with a Guinness world record for most screen credits awarded in 2007 (when he had 244), as well as being credited as "tallest leading man" (Lee was 6'5) and starring in the "most films with a sword fight" (17). He was best known for portraying villains such as Francisco Scaramanga in The Man With the Golden Gun, Count Dracula in seven Hammer films, Lord Summersisle in The Wicker Man, Count Dooku in Star Wars Episodes II & III as well as Saruman in both The Lord of the Rings and The Hobbit film trilogies. He was a particularly common choice for figures such as Satan, Dracula and Death, due to his imposing frame and distinctive voice. Prior to his acting career, he had served in the Finnish Army during the Winter War and the British military during World War II. He served with the RAF (he was declared unable to fly due to issues with his optic nerve and served in intelligence), and also operated as part of the British Army's Long Range Desert Group, the forerunner of the SAS, and the highly secretive Special Operations Executive. In the latter he trained alongside his step-cousin, Ian Fleming. He was also distantly related to Confederate General Robert E. Lee.