Mack the Knife - Brecht's Threepenny Film is a 2018 German-Belgian directed by Joachim A. Lang. The film is intended to represent an attempt to realize Bertolt Brecht's artistically and politically radical film adaptation concept for his 1931 movie "The Threepenny Opera". The frame story, set in the 1920s, shows the script development against the backdrop of the Great Depression and the rise of National Socialism. Brecht's ideas are illustrated by the confrontation with the film producer, to whom he presents his concept in stages.

The following weapons were used in the film Mack the Knife - Brecht's Threepenny Film: 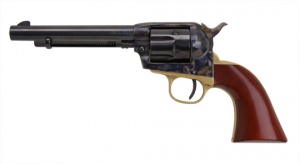 He holds his revolver with an exaggerated expression.

The Lee-Enfield No.1 Mk.III* rifle is used by two German Berlin police officers chasing demonstrators on May 1st, 1929. Macheath's (Tobias Moretti) henchmen wield these rifles during Brecht's (Lars Eidinger) narrative of how his film was really supposed to end.

One of the two police officers stops to take a well-aimed shot at fleeing demonstrators.

The henchmen walk up a bridge staircase with their SMLEs.

Front view of the marching henchmen...

The line of police officers hold their SMG at the ready.

The officers start firing at the beggar crowd.
Retrieved from "https://www.imfdb.org/index.php?title=Mack_the_Knife_-_Brecht%27s_Threepenny_Film&oldid=1522688"
Categories: