Young Winston is a 1972 British drama based on the early years of Winston Churchill. The film covers Churchill's schooldays, his service as a cavalry officer in India and the Sudan, including the famous cavalry charge at Omdurman, and his participation in the Boer War as a war correspondent. The film's cast includes Simon Ward, Edward Woodward, Robert Shaw, and was directed by Richard Attenborough.

The following weapons were used in the film Young Winston:

Webley "WG" Army Model revolver is a personal weapon of Lt. Winston Churchill (Simon Ward) during his service in North-West India. These revolvers are also seen in hands of other British officers. 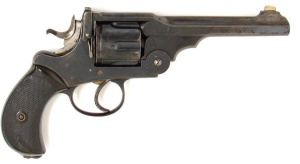 A large holster for Webley revolver.

Lt. Churchill with his Webley revolver.

Cpt. Haldane (Edward Woodward) with his Webley revolver during the Boer War. The revolver is not seen good enough and could be another Webley model.

Mr. Howard (John Woodvine), in whose house Churchill had knocked after his escape from Boer captivity, is armed with a compact revolver that looks like Webley Bulldog. Later he gave his revolver to Churchill. 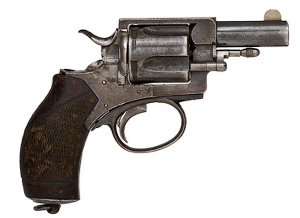 Mauser C96 pistol is a personal weapon of Lt. Winston Churchill (Simon Ward) during his service in Sudan, especially in the charge of the 21st Lancers, and during the Boer War.

Lt. Churchill (Simon Ward) with his Mauser C96 in the charge of the 21st Lancers.

Winston Churchill with his Mauser C96 in the Boer War.

A close view on Churchill's C96.

During Churchill's service in the frontier region of British India, some of the 35th Sikhs soldiers are armed with Martini-Henry rifles.

Sikh soldier with his Martini-Henry rifle.

During the parade in Royal Military Academy Sandhurst the cadets are armed with Martini-Henry rifles, fitted with Pattern 1876 socket bayonets.

Lee-Enfield Mk.I CLLE (Charger Loading Lee Enfield) - .303 British. Note the bridge over the receiver level with the rear of the magazine which contains a charging clip guide.

Sikh soldier fires his Lee-Enfield Mk.I or Lee-Metford. Note the difference from the rifles on the screenshot above.

British soldiers with Lee-Enfield Mk.I or Lee-Metford rifles during the Boer War. A close view on the reciever.

British soldiers with Lee-Enfield Mk.I or Lee-Metford rifles during the Boer War.

Boers are armed with Mauser rifles. The only rifle seen good enough looks like Spanish M1893 or Turkish M1903.

A good view on Mauser cartriges. Due to their shape these are most likely German 7.92x57mm.

The Pashtun tribesmen in North-West India are armed with traditional Jezail muskets. Jezails are also seen in hands of Mahdists in the Battle of Omdurman.

During the Boer attack on British armored train a Maxim on a large artillery-style wheel mount is seen at distance. This machine gun can be of rifle caliber or 1-pounder "Pom-Pom". Another Maxim is seen on the border post.

A Maxim is seen between two Boer guns.

On the stock footage of Yalta Conference (February 1945) the Soviet Army guards of honor are armed with STV-40 rifles. They can be identified by the sword bayonets that were used only with SVT-40 of all rifles of Soviet Army of that time.

British field howitzers in the Battle of Omdurman.

British field guns in the Battle of Omdurman.

A naval gun (most likely 47mm 3-pounder) on the river gunboat in the Battle of Omdurman.

A naval gun (most likely 57mm 6-pounder) on the British armored train during the Boer War. The real armored train was armed with 3-inch 7-pounder Mark IV gun.
Retrieved from "https://www.imfdb.org/index.php?title=Young_Winston&oldid=1395071"
Categories: