From Internet Movie Firearms Database - Guns in Movies, TV and Video Games
(Redirected from The Emerald Forest)
Jump to navigation Jump to search

The Emerald Forest is a 1985 British adventure drama directed by John Boorman (Zardoz, Beyond Rangoon). Bill Markham (Powers Boothe) is an engineer who works on the construction of a dam in the Brazilian rainforest. When Bill takes his family to the construction site, his young son Tommy is lost in the jungle. Bill finds out that Tommy was abducted by one of the local tribes, but only after ten years of unsuccessful searching does he have a chance to meet his son, who has become the adopted son of the chief of the Invisible People tribe.

Note: while the movie was filmed in Brazil, the weapons were provided by British armorer Bapty & Co.

The following weapons were used in the film The Emerald Forest:

When Bill Markham (Powers Boothe) comes to a brothel in an attempt to rescue some women of the Invisible People tribe, the owner's henchman disarms him of his Browning Hi-Power.

The brothel owner's henchman uses a Ruger Speed Six revolver during the rescue of the slave women. 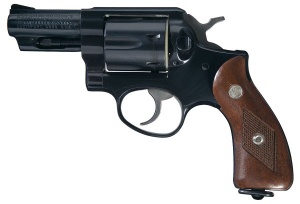 Trying to kill an escaping woman.

What appear to be a Smith & Wesson Model 27 is seen in hands of a local man when Tommy tries to sneak into the town.

Smith & Wesson Model 27 with Patridge Sights - .357 Magnum. Note again the high gloss and checkering on the top strap on the frame and barrel.

The local man fires at Tommy's canoe. The gap between the cylinder and the frame matches a .357 revolver rather than a .44 Model 29.

One of the brothel guards carries a briefly seen M1911-style pistol.

The henchman carries the pistol tucked in his belt.

Bill fires at the bartender who tries to draw a nondescript handgun.

Bill appears just in time to repel the attack of the Fierce People.

During the rescue of the slave women, Carlos (Gracindo Júnior) and Rico (Arthur Muhlenberg) are armed with Single Barreled Shotguns. Single barreled shotguns are also used by Fierce People warriors.

Rico loads his shotgun in the background.

Paulo and Carlos fire their shotguns.

In the same scene Paulo (Chico Terto) is armed with a Double Barreled Shotgun.

Paulo and Carlos fire their shotguns.

A Winchester Model 1897 "Trench Gun" is seen in the hands of a henchman.

The henchman at the center holds his shotgun.

In one scene, a native hunter carries a sporterized Lee-Enfield rifle.

The hunter carries his rifle. The Lee-Enfield magazine is seen.

A view of the barrel and forend of the stock.

A brothel guard is killed by an arrow when he tries to fire his rifle. This rifle is possibly the same Lee-Enfield seen above, but it's hard to say for sure.

A Fierce People warrior in the center fires a rifle, traded for slave women.

Bill Markham (Powers Boothe) uses the CAR-15 carbine during the confrontation with Fierce People tribe. Later it falls into the hands of Chief Jacareh (Claudio Moreno). The carbine perfectly matches an XM177E1 and fires full auto, so it's possibly an original version rather than a mocked up commercial Colt Carbine.

Bill holds his rifle while crossing the river.

Bill, wounded in the hand, has to fire single-handedly.

Chief Jacareh trades with brothel owner ammo for his "thunder stick" in exchange for young women.

Rico (Arthur Muhlenberg) captures an AKS-47 from the brothel guards. The AK is seen in hands of Bill Markham (Powers Boothe).

The AKS-47 is seen in hands of Rico in the background during the battle against the Fierce People.