Project A (A計劃; A Gai3 Waak6; also known as Pirate Patrol and Jackie Chan's Project A) is a 1983 Hong Kong martial arts action comedy written, directed and starring Jackie Chan as Marine Police Sergeant Dragon Ma Yue Lung. While the film is set at the end of the 19th century, but many details of life, including some firearms, appear to be anachronistic. A sequel Project A Part II was released in 1987.

The following weapons were used in the film Project A:

What appears to be an anachronistic Smith & Wesson Model 36 is seen in hands of the British Chief of Hong Kong Police Force (uncredited). The revolver looks like gold-plated but it is likely Titanium nitride coating that has deep gold color. 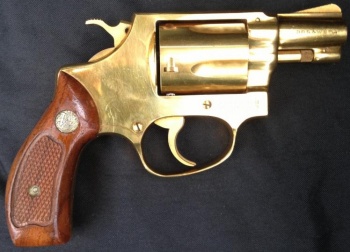 British Chief (uncredited) points his revolver at Dragon Ma Yue Lung (Jackie Chan) whom he thinks to be a spy.

Chou Wing-ling's henchman cocks the pistol in the scene on the clock tower.

A henchman points his Luger at Dragon Ma (Jackie Chan).

Hong Tin-tzu holds his Luger in the same scene.

Pirate Chief San-po (Dick Wei) carries a P08 Artillery in his holster during the boarding of a British ship.

When the pirates attack a British ship, a sailor is seen firing a standard Luger P08.

A Luger-wielding sailor is killed by a crossbow arrow.

Mauser C96 pistols are carried by some gangsters. In one scene, Dragon Ma (Jackie Chan) disarms a gangster and holds a pistol.

Dragon Ma uses the Mauser to threaten other gangsters.

A Mauser C96-style pistol is used by a gangster in one scene. It looks too crude and simplified and appears to be a flashpaper replica, used for Jackie Chan's safety as the pistol fires in dangerous proximity to his face.

A gangster pokes his pistol at Dragon Ma's face.

The pistol fires. The pink muzzle flame allows to identify this gun as flashpaper.

Close-up of the gun.

Marine Police sailors watch in astonishment and anger as their ships explode.

Close-up of several rifles in the same scene.

British Army soldiers aim their rifles (according to their uniforms, they must be Australians).

Close-up of a rifle.

Pirates attack a British ship. Some of them carry rifles while most are armed with various swords, axes, bows and crossbows.

A sailor fires at attacking pirates.

Jaws with a rifle.

Jaws and Hong fire at pirates.

The rifles that appear to be pre-SMLE Lee-Enfields are briefly seen in several scenes.

Lee-Enfield rifles in a gun rack in the barracks of Marine Police. The rifle in the center seems to have a shorter barrel.

A barrel of the rifle is seen.

A same rifle is seen in another scene.

A pirate points a same looking rifle at British captain during the boarding.

Stick grenades that appear to be wooden mockups are seen in the training scene. In the final scene, Hong Tin-tzu (Yuen Biao), Jaws (Mars) and Fei (Sammo Hung) use these grenades to eliminate most of San-po's pirates. In reality, stick hand grenades of such outlook appeared only during the First World War.

Hong Tin-tzu and Jaws carry grenades in the final scene.

Why do you think I need a hammer? - Fei holds a grenade.