The Winchester Model 1892 rifle and variants can be seen in the following films, television series, video games, and anime used by the following actors: 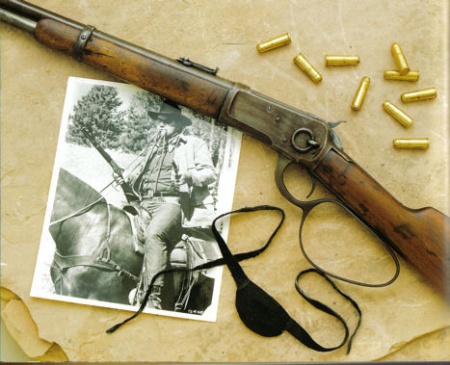 The Winchester 1892 Saddle Ring Carbine with large lever loop used by John Wayne in the film True Grit, similar to the one he used in Rio Bravo and El Dorado. Serial #501892. Pictured with .44-40 shells. (Source: Photocopied from book "The Peacemakers: Arms and Adventure in the American West" written by R.L. Wilson.)

Replica Winchester 1892 "Mare's Leg" with standard lever loop and rounded barrel – .44-40. This model also shows off the screw used to do "rapid fire". This is put in place so the user does not need to pull the trigger. The screw breaks the shots when the action is worked. 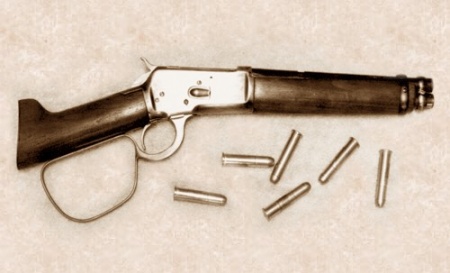 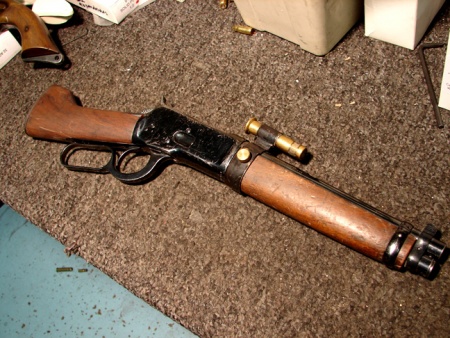 A 6-shot cut-down rifle/pistol version of the Winchester 1892 rifle was used as a short carbine and called the "Mare's Leg". The name originated from the television series Wanted: Dead or Alive, where the main character Josh Randall wields a shortened Winchester 1892 that he nicknamed "Mare's Leg". The name had since become a generic term for any sawed-off lever-action rifle.

Though some of the Mare's Legs seen in films are cut from original Winchester 1892s, clones built by Marlin, Rossi, and Puma are also seen in chains of commerce. Since the front sight was removed with the cut-off section of the barrel, many examples of the Mare's Leg remove the rear sight as well to lighten the firearm; the sights are not necessary anyway, since the gun is a 'point-and-shoot' close-quarters firearm.

The "Mare's Leg" has been seen in the following films:

The El Tigre rifle was a Spanish copy of the Winchester 1892 Saddle Ring Carbine made by the firm of Garate Anitua y Cia in Eibar from 1915 to 1938 for use by the Spanish Civil Guard. Garate El Tigre rifles were made with 22-inch barrels with 12-round magazines in .44-40 (known as .44 Largo in Spain), featuring sling swivels, military-style folding rear sight, and front sight ahead of the muzzle band. Production approached one million units. It was used by both sides of the Spanish Civil War (1936–39). El Tigre rifles were exported to the US surplus market in the 1950s. It was commonly used as an inexpensive substitute for Winchesters in films made after WWII.