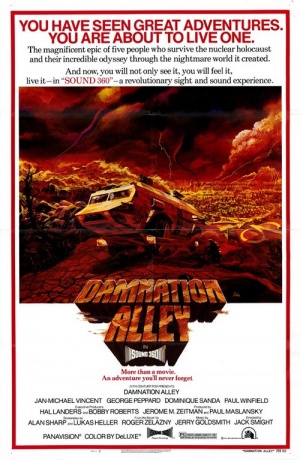 The following firearms were used in the film Damnation Alley:

1st Lieutenant Jake Tanner and Major Eugene "Sam" Denton (Jan-Michael Vincent and George Peppard, respectively) both carry Smith & Wesson Model 19 revolvers while on duty at the ICBM silo. They continue to carry these weapons after the bombs fall. 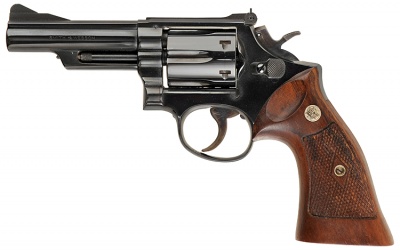 Tanner draws and fires his Model 19.

Keegan (Paul Winfield) has an M16 rifle while painting the side of the barracks.

Keegan with his M16 rifle.

Keegan atop the barracks with his M16.

The de facto leader of the "Mountain Men" (Seamon Glass) is armed with a Winchester Model 1897 Field shotgun.

Two of the "Mountain Men". The one on the left is armed with a Winchester Model 1897 Field shotgun.

The "Mountain Men" close in on their new captives.

Two of the Mountain Men are armed with Winchester 1892 Saddle Ring Carbines.

The Mountain Men reveal themselves to the survivors.

The survivors realize that they're surrounded.

Two of the "Mountain Men". The one on the right is armed with a Winchester 1892 Saddle Ring Carbine.

The "Mountain Men" close in on their new captives.

The "Mountain Man" aims his Winchester 1892.

The first of the "Mountain Men" (Robert Donner) that the survivors encounter has a revolver of an unknown make tucked in his waistband. He never draws it, choosing instead to use the S&W Model 29 that he takes from Denton.