Last Man Standing is a 1996 action drama directed by Walter Hill and starring Bruce Willis as John Smith, a gunslinger-for-hire during the Prohibition era who stumbles upon a ongoing war between the Irish and Italian Mafia in a small Texas town near the Mexico border. The film was inspired by the Japanese samurai film Yojimbo.

The following weapons were used in the film Last Man Standing (1996):

John Smith (Bruce Willis) keeps two M1911A1s with diamond checker grips in crossdraw shoulder holsters and dual-wields the pistols several times in the film. Hickey (Christopher Walken) also uses an M1911A1 with bolo wood grips as his sidearm. This film obviously is not trying to win the award for gun realism as Smith tends to fire up to 40 rounds from his .45s in each scene before reloading (when their capacities are seven rounds plus one in the chamber). The guns are also shown capable of sending people flying when they are barraged by them. Also, as Bruce Willis is left-handed, the left 1911 has an extended slide release so his index finger can easily release the slide.

Smith fires about 30 bullets from his two M1911A1s at Finn (Patrick Kilpatrick) after he smashes up his car.

Smith keeps his two M1911A1s on the night stand when he spends the night with Wanda (Leslie Mann). Note the diamond checkered grips, more commonly found on the original M1911. The rounded backstraps (mainspring housings) and the trigger-finger relief cuts, however, show they are M1911A1s. Note the narrower spur hammer (post-WWII) and the extended slide release on the left one, while the 1911 on the right has a period-correct wider checkered hammer.

Smith points his M1911A1 at Fredo Strozzi (Ned Eisenberg) when Strozzi pulls a gun on him for quitting his employ, and beating up Giorgio.

Smith loading up 25+ magazines before going to where Felina is.

Smith blasts away at Doyle's men with his .45s during their dinner to release Felina (Karina Lombard).

Smith drops out the smoking magazines from his .45s.

Smith keeps his .45s close as he soaks in a tub.

Sheriff Ed Galt (Bruce Dern) hands Smith his .45s, notice the grips appear different on the ones seen here, and note the extended slide release on the left one.

Smith checks the load in his .45 pistol.

Smith sends a mobster through the window with one of his .45s.

Multiple times during this scene, the slides lock back on his .45s, only to be back in battery seconds later. This shot is one of the few instances where the guns are supposed to go empty.

Smith reloads his .45s. Note the extended slide release on the left one.

Smith confronts Hickey with his .45 after Hickey tries to draw his .45.

Seen in the hands of several of the nameless thugs on both the Strozzi and Doyle family sides are Colt Official Police revolvers.

While holding his revolver, Finn is launched into the street by the 40 or so rounds fired from John's .45's (physically impossible, but not for Hollywood).

One of Doyle's thugs interrupts Smith and Wanda by firing his Colt Official Police at them.

One of Strozzi's men holds his Colt Official Police on Felina during the exchange.

One of Doyle's men holds Felina hostage with his Colt Official Police.

Hickey inspects one of the Colt Official Police among the littered bodies after Smith massacres them.

Hickey smells the Colt Official Police and determines that it has not been fired. No burnt powder smell.

Smith uses one of Doyle's men as a human shield while firing his New Service at another thug.

One of the cops shooting up the convoy uses a Colt New Service. The large frame and hooked front sight distinguish it from the Official Police models used more frequently in the film.

One of the men who massacre the truck convoy is armed with a Colt New Service. Note the hooked front sight, distinguishing it from an Official Police.

One of the Doyle's men uses a Colt Detective Special during the roadhouse shootout.

One of Doyle's men fires a Colt Detective Special at the Strozzis.

The bartender Joe Monday (William Sanderson) keeps a Colt Walker 1847 percussion revolver as his self defense weapon in the film and uses it during the final confrontation, amazed that it actually fired (despite how new it actually looks).

Joe keeps his Colt Walker 1847 revolver on the counter of his bar.

Joe puts his Colt Walker on the counter when he walks out of the back, well aware Doyle will eventually come to question him on Smith's whereabouts.

Joe wears a grin of satisfaction upon using the revolver.

Joe watches Smith and Hickey face off with his Colt Walker in hand.

Some of the nameless thugs can also be seen using Smith & Wesson M1917 revolvers. 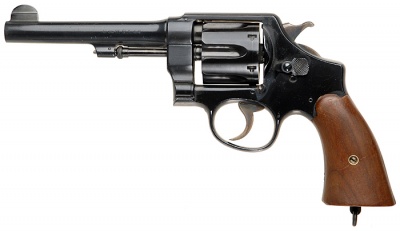 One of the men who massacres the truck convoy is armed with a Smith & Wesson M1917.

Jacko the Giant (Tiny Ron), one of Doyle's men, fires an M1917 at Smith, who uses another thug as a human shield.

Doyle (David Patrick Kelly) holds an M1917 when he and his men massacre the Strozzi's as they flee the burning building.

A Springfield 1903 rifle is used by one of the men to execute the truck convoy.

The man second to last fires his Springfield 1903A3 at the truck convoy.

One of the men who massacres the truck convoy is seen using a Winchester 1892 Saddle Ring Carbine.

The man closest fires his Winchester 1892 Saddle Ring Carbine at the convoy.

The man in the middle now brandishes the Winchester '92 rifle.

One of the men that massacres the truck convoy uses a Winchester 1873 rifle.

A man fires his Winchester 1873 rifle at the convoy.

Hickey (Christopher Walken) uses an M1928 Thompson submachine gun fitted with a 50 round drum several times in the film to spit out ammo at people when he sees fit. One notable scene shows that despite recklessly shooting, Hickey is also able to in fact NOT hit anyone. Some of Strozzi and Doyle's men can be seen using them too. Some of the men who massacre the convoy are also seen using M1928s, although they are fitted with 30 round magazines.

Some of the men massacring the convoy use M1928 Thompsons fitted with 30 round magazines.

One of the men fires his M1928 Thompson.

Hickey fires his Thompson at the comandante's bodyguards; the number of squibs doesn't come close to the number of bullets that should be hitting the bodies.

Hickey carelessly tosses the Thompson away. I quote Walken on this, "Whenever I have a gun in my hand, I want to throw it away." I guess he got his wish in this movie. He tosses guns left and right.

One of Strozzi's men holds a Thompson during the exchange.

Hickey fires his Thompson in Doyle's place to demonstrate that he's able to also NOT shoot anyone.

As Doyle interrogates Joe, Hickey puts his Thompson to his neck.

One of Doyle's men armed with a Thompson.

Hickey mows down Strozzi with his Thompson.

Smith hangs up a Thompson as a message to Doyle that he killed nearly all his men.

Hickey holds a Thompson during the final confrontation.

Hickey once again carelessly tosses the Thompson to the ground.

Some nameless thugs in the Doyle family uses Winchester Model 12 shotguns throughout the film.

Example of a Winchester Model 1912 Riot Gun used in film

Some of the men uses Winchester Model 12 shotguns to massacre the truck convoy.

Doyle's men do some more searching.

One of Doyle's thugs fires a Model 12 at Smith during the big shootout.

Deputy Bob (Ted Markland) (for all intents and purposes the last of Doyle's gang) holds a Model 12 during the final confrontation.

Bob tries to chamber his Model 12 before being shot to pieces by Smith. A smart person would have had the gun chambered and pointed at him, but it's a movie.

One of Doyle's men searches for Smith with a Stoeger/IGA Coach side-by-side shotgun.

Doyle's thug searches for Smith with a Stoeger/IGA Coach shotgun in hand.

One of the men who massacres the truck convoy uses an Browning Automatic Rifle dressed up as a Colt Monitor. One of Doyle's men is also seen using an Colt Monitor when they massacre the Strozzis as they flee the burning building.

The 2nd guy to the right brandishes an Colt Monitor.

One of Doyle's men fires a Colt Monitor at the Strozzis.
Retrieved from "https://www.imfdb.org/index.php?title=Last_Man_Standing_(1996)&oldid=1215211"
Categories: