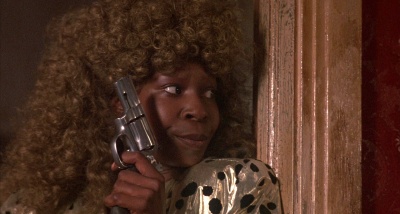 Whoopi Goldberg (born Caryn Elaine Johnson) is an American actress well known for currently being one of the co-hosts of the ABC talk show The View. Also well known for her role as Guinan in Star Trek: The Next Generation, Goldberg also had roles in such films as The Color Purple, Sister Act and its sequel, and as well as her portrayal of Oda Mae Brown in the 1990 film Ghost, a role for which she became the first black woman in 50 years to receive an Academy Award (for Best Supporting Actress). She also one of only sixteen entertainers to achieve the "EGOT" (having received an Emmy Award, a Grammy Award, an Oscar, and a Tony Award).