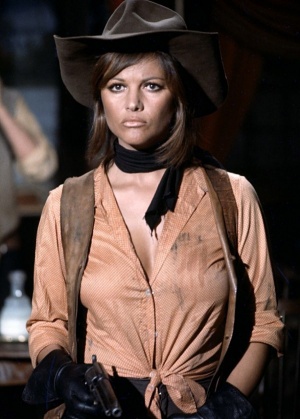 Claudia Cardinale as Marie Sarrazin with SAA revolver in The Legend of Frenchie King (Les Pétroleuses) (1971).

Claudia Cardinale was born 15th April 1938 in Tunis. Claudia won the contest for the most beautiful Italian girl in Tunisia and it was a trip to the Venice Film Festival, where she decided to become an actress. She debuted in a 1958 movie directed by Mario Monicelli. Over the years she filmed both in Europe and America - The Pink Panther (1963), The Professionals (1966). In 1968 she occupied a major role in one of the the most famous "spaghetti" westerns Sergio Leone's Once Upon a Time in the West (1968). She was married to Franco Cristaldi and Pasquale Squitieriho. She has a son, Patrick and a daughter named Claudia. She currently lives alternately in Rome and Paris, depending on the location of work.