Old Shatterhand (alternative English title Apache's Last Battle) is a 1964 Eurowestern directed by Hugo Fregonese. It is the third movie in Winnetou film series, based on the novels by Karl May.

The following weapons were used in the film Old Shatterhand:

Bradley fires his revolver during the battle for Fort Grant.

Dixon (Rik Battaglia), Joe Burker (Mirko Ellis) and other brigands, Sheriff Brandon (Nikola Popovic) and some US Cavalry NCOs, including Sgt. Flanner (Andrea Scotti), are armed with 5-shot Arminius revolvers with 6" barrels. It appear to be the same long barreled version of HW-1S signal revolver that is widely used in other Winnetou movies. 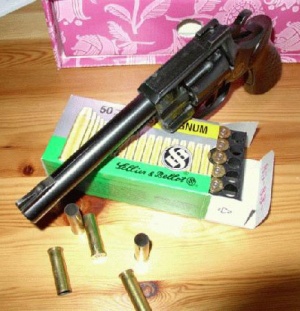 A good view of Dixon's revolver during the shootout on Burker's ranch.

Dying soldier (at the right) drops his revolver during the battle for Fort Grant.

Double Barreled Shotgun is the favoured weapon of Sam Hawkens (Ralf Wolter). Some Dixon's brigands and Apache and Comanche warriors also use shotguns.

Joe Burker (Mirko Ellis) takes the shotgun during the massacre on Kampendijk farm. He also carries a pair of Arminius revolvers in holsters.

Sam holds the shotgun on shoulder.

Dixon's henchman with the shotgun.

An Apache warrior at the right holds the shotgun.

Sam's friends Dick Stone (Mirko Boman) (at the left) and Will Parker (Vojkan Pavlovic) (at the right) carry Winchester rifles in saddle holsters. 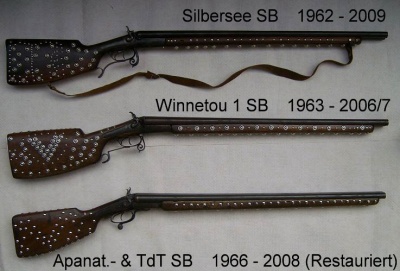 The double barreled rifle, named "The Bear Killer", is briefly used by Old Shatterhand (Lex Barker) in one scene.

Old Shatterhand's "The Bear Killer", as it appears on screen

Single shot top-break hunting rifles are widely used by Apache and Comanche warriors. Due to a continuity error, Old Shatterhand (Lex Barker) holds a single shot rifle instead of his Winchester Model 1894 in one scene. Such rifles were (and still are) produced by various manufacturers in Europe and America, often referred by the German term Kipplaufbuchse.

Comanche Chief Big Bear (Aleksandar Djuric) uses the buttstock of his rifle to open the crate with whiskey.

A Comanche warrior with rifle.

Most US Cavalry soldiers are armed with percussion cap muskets. These guns are probably modern replicas of 1862 Richmond Carbine.

These three screenshots prove that the muskets are firing props. Note the moving of the hammers.

More closeups of the muskets.

Some muskets with longer barrels are also seen. Due to two barrel bands and brass patch box on the buttstock they appear to be Remington 1863 Zouave (probably modern replica).

The musket with longer barrel is hanging on a pole.

The long barrel is seen at the right.

Dying soldiers hold what appear to be 1863 Zouave rifles. Note the patch box on the buttstock, seen at the far left.

In one scene aged Apache Lata-Nalgut (Milivoje Popovic-Mavid) who serves as Paloma's guard holds the gun that appears to be percussion cap hunting musket.

Lata-Nalgut watches with the gun in hands as Old Shatterhand approaches Paloma's house.

During the battle for Fort Grant the soldiers use several field cannons against Apaches. These movie props are Napoleonic-style guns on simple wooden carriages, probably standing for 12-pounder guns, widely used by US Army in mid-19th century. When firing, the cannons recoil just as real guns, and they are seen rammed.

Cannons are deployed on the walls of Fort Grant.

Soldiers are ramming the cannon.