The Colt 1851 Navy and variants can be seen in the following films, television series, video games, and anime used by the following actors:

Colt 1851 Navy with a cartridge conversion. This is a reproduction of the gun used by Clint Eastwood in The Good, The Bad, and The Ugly and imported by Cimmaron Arms.

Colt 1851 Navy with a cartridge conversion. This is a reproduction of the gun used by Eli Wallach in The Good, The Bad, and The Ugly and imported by Cimmaron Arms.

Only distinguishing trait is a loading gate so that the weapon can fire metallic cartridges. In films, these guns are commonly placed in anachronistic time periods such as the Civil War, due to the safer method of firing cartridge blanks instead of cap and ball blank shot. 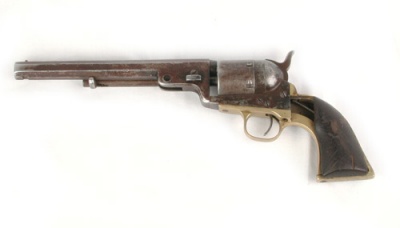 The Colt 1851 Navy with a Richards-Mason cartridge conversion made to look like a POS used by Russell Crowe in the film The Quick and the Dead (1995).

When cartridges became popular in the 1870s, percussion revolvers became dated. To fix this, a cartridge conversion method was created by Charles B. Richards and William Mason, employees of Colt at the time. The conversion proved popular and allowed gunslingers to keep their favorite guns, but now easier and faster to reload.

A pocket model of the 1851 with cylinder grooves. Cerimonial modern models have nickel engraved finishes and sometimes ivory grips.