Original Colt Dragoon 1st Model - .44 Cal. Designed to address some of the problems encountered with the Colt Walker. 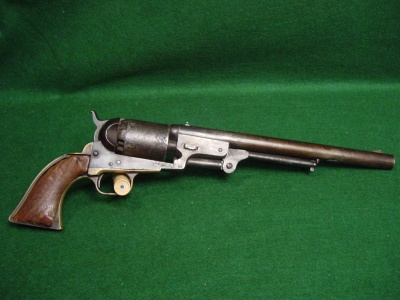 The Colt Dragoon followed the short run Colt Walker, reusing many of the development expenses, and was Colt's first truly successful revolver. Significantly more Colt Dragoons were produced than Colt's prior designs combined. It would be followed by the Colt 1851 Navy.

Due to widespread Belgian counterfeits while Colt's own manufacturing was unable to meet demand for the revolvers, Colt would resort to offering infringing manufacturers of sufficient quality a choice between paying a fee to be officially licensed or being sued. Those that paid the fee had their guns stamped "Colt Brevete" (Colt's patent). These, the many non-licensed copies, and copies made after Colt's patent expired will often differ visually from originals. As these copies are of relatively low value, relatively common in Europe, and predate availability of modern replicas, they will sometimes show up in media (particularly older films). Like many of the more popular percussion revolvers, modern replicas are widely available, often in non-historical configuration.

The Colt Dragoon and variants can be seen in the following films, television series, video games, and anime used by the following actors: