From Internet Movie Firearms Database - Guns in Movies, TV and Video Games
(Redirected from The Homesman)
Jump to navigation Jump to search 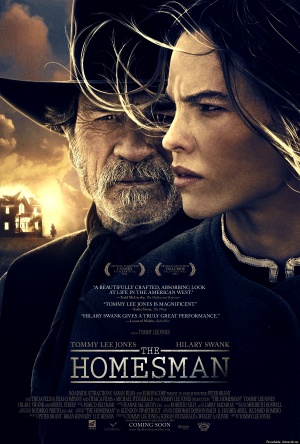 The Homesman is a 2014 historical drama that is a feature film adaptation of the Glendon Swarthout novel of the same name. The film was produced and directed by Tommy Lee Jones, who also stars in the film as George Briggs, a man who is saved from hanging by an unmarried woman (Hilary Swank), and then together they attempt to take three mentally ill women across the harsh land to a church that will take care of them. The film's cast also includes Meryl Streep, Hailee Steinfeld, John Lithgow, Tim Blake Nelson, William Fichtner and James Spader.

The following weapons were used in the film The Homesman:

Throughout the film, George Briggs (Tommy Lee Jones) carries a Colt 1851 Navy revolver as his sidearm.

A Colt Dragoon (from the loading lever latch) is carried by the Freighter (Tim Blake Nelson).

Original Colt Dragoon 1st Model - .44 Cal. Designed to address some of the problems encountered with the Colt Walker.

The Freighter (Tim Blake Nelson) pulls his revolver on Briggs.

The revolver is holstered on the right.

Aloysius Duffy (James Spader) carries a pair of compact pistols that resemble the Colt 1862 revolver with a Richards-Mason conversion. When his hotel catches fire, he is seen racing down the stairs with the pistols drawn.

When Briggs is smoked out of his house at the film's beginning, some of the men who confront him are armed with what appear to be Lyman Plains Pistols.

When Briggs is smoked out of his house at the film's beginning, some of the men who confront him are armed with what appear to be Lyman Plains Pistols.

The pistol is pulled.

An Enfield 1858 is the rifle kept by Mary Bee Cuddy (Hilary Swank) in her coach. This rifle is anachronistic due to the fact that it was not produced until 4 years after the movie is set. The 1858 is easily identified from the 1853 by its 2 bands(instead of 3) and the longer barrel past the stock, with the bayonet lug on the side instead of the front sight doubling as the bayonet lug.

Rifle held in the center.

One of the men appears to be carrying a Hawken rifle.

One of the men appears to be carrying a Hawken rifle.

A Double Barreled Percussion Shotgun is seen in the hands of the bartender employed by Aloysius Duffy (James Spader).

A Double Barreled Percussion Shotgun is seen in the hands of the bartender.
Retrieved from "https://www.imfdb.org/index.php?title=Homesman,_The&oldid=1004797"
Categories: