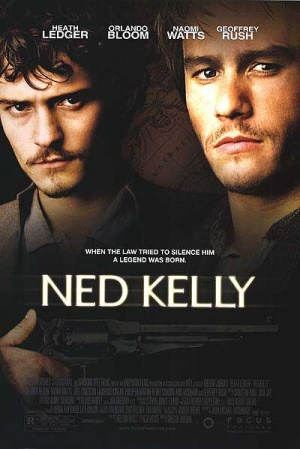 Ned Kelly is a 2003 historical drama that focuses on the life of notorious Australian Bush-ranger Ned Kelly during the late 1870s. The film stars Heath Ledger as Ned Kelly, Orlando Bloom as Joe Byrne, Geoffrey Rush as Francis Hare, and Naomi Watts as Julia Cook.

The firearms are portrayed with unusual historical accuracy. It is one of the few films in which characters are shown loading cap-&-ball revolvers from powder-flasks. As in real life, the Kelly's guns at first are all rather old-fashioned, and partly home-made, because they were poor and couldn't afford the latest 1870s breech-loading repeaters available to landowners and the police. As they became successful bushrangers they up-graded their armoury.

The following weapons can be seen in the film Ned Kelly:

The Colt 1851 Navy is seen in the hands of the majority of Ned's gang in the film.

A Victorian Police officer with a Colt 1851 Navy Revolver.

Ned Kelly with an 1851 Navy Revolver.

Ned and his gang practice with their Colt 1851 Navy Revolvers.

Some characters are also armed with Remington 1858 New Army Revolvers.

A Kelly gang member with his New Army Revolver.

Ned Kelly (Heath Ledger) as well as Joe Byrne (Orlando Bloom) use a Remington 1858 New Army Snub Nose Revolver. Remington did not manufacture such short pistols but they were sometimes cut down privately for better concealment.

Joe cocks the hammer of the Snub New Army.

The British-made Snider-Enfield Rifle is the most commonly seen rifle in the film, used by Ned Kelly as well as members of the Victorian Police. In reality, Ned Kelly carried and used a Snider-Enfield Carbine he named "Betty" which was his most prized rifle.

A Man takes aim with his Snider-Enfield Rifle.

Dan Kelly stands next to Ned, holding a Snider-Enfield.

Victorian Police stand at the ready with their Snider-Enfield Rifles

Some Victorian Police are also seen armed with Martini-Henry Rifles.

The officer in the middle with the long beard is holding a Martini-Henry Rifle as well as the officer to his left.

Early on in the film, Ned Kelly is seen using a sawn-off .577 Carbine as his main weapon. The real Ned Kelly actually did carry one of these (given him by bushranger Harry Power to whom he'd been 'apprenticed' as a teenager) and it was supposed to be one of his favorite weapons, though he quit using it later on in life.

Replica of Kelly's carbine. Made for the Australian television mini-series The Last Outlaw (1980). It's believed that the original carbine was thrown out by museum personnel in the 1950s believing it to be just a junky firearm of no value.

Ned cocks the hammer on his carbine

Ned takes aim with his Carbine

Ned takes aim with Colt 1878 from behind a tree.

The Colt 1878 Shotgun lays among the table full of Navy Revolvers
Retrieved from "https://www.imfdb.org/index.php?title=Ned_Kelly_(2003)&oldid=1372201"
Categories: