The Paris Commune (USA theatrical release title; the original title Zori Parizha ("Dawn of Paris")) is a 1936 Soviet B&W historical movie, directed by Grigoriy Roshal. It depicts the events of Paris Commune in 1871.

The following weapons were used in the film The Paris Commune (Zori Parizha): 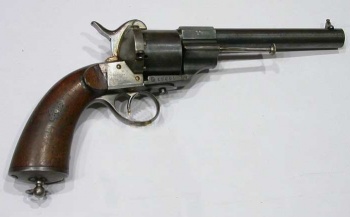 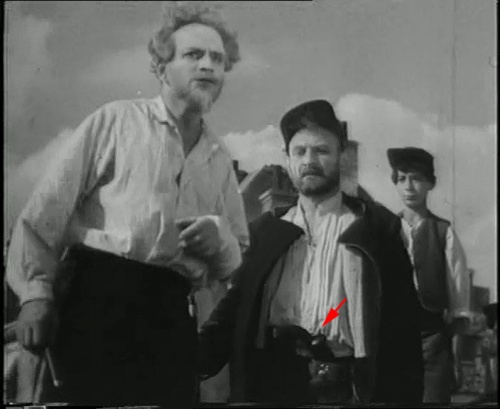 A Communard at the right carries a revolver tucked at his belt. 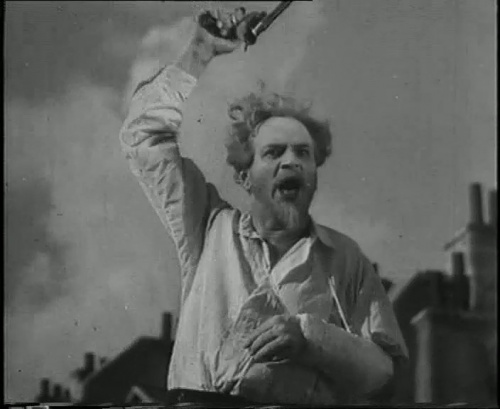 Wounded Dombrowski leads his men in attack with a revolver in hand. 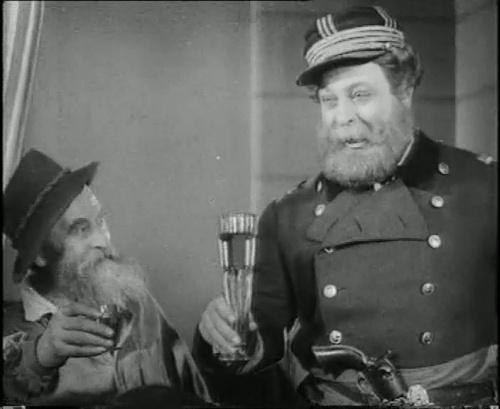 Karl Steiper, the commander of International Battalion, carries a Colt 1851 Navy revolver tucked at his belt. 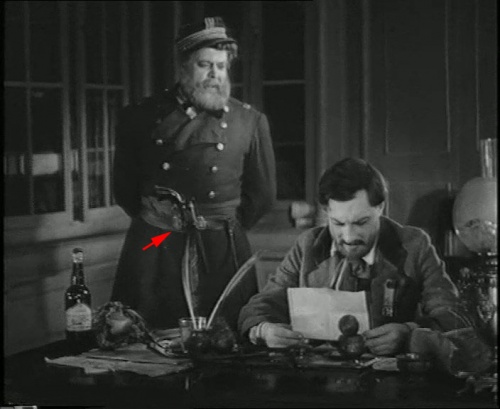 Another view of Steiper's revolver. 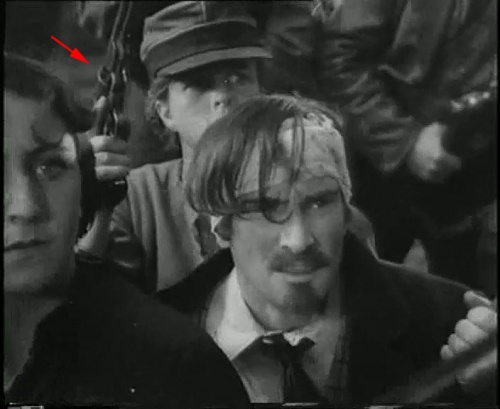 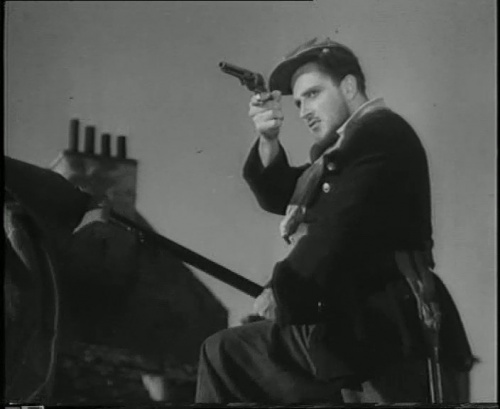 Various characters are seen with Colt Walker revolvers. Hexagonal barrel, uncommon for original Colt-made Walkers (and it is not many were made, and none were sold outside the United States), are likely signs of European copy.

One of the original cartridge сonversion Colt Walker 1847s - .44 caliber used by Clint Eastwood in the film The Outlaw Josey Wales. Since deactivated by the propstore of London. 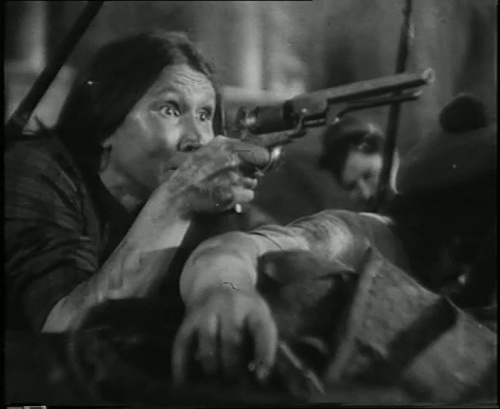 An aged female Communard fires a Colt during the defence of the last barricade. Note the lacks a loading lever latch that the later Colt models had. Revolver also has cartridge conversion.

While in battle, Karl Steiper's (Viktor Stanitsyn) revolver is substituted with another model. Similar looking revolvers are seen in another scenes. These revolvers appear to be some break-action Gasser models. 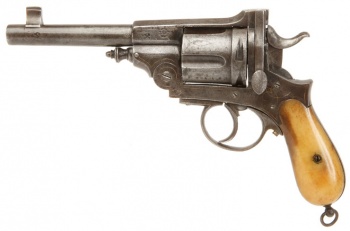 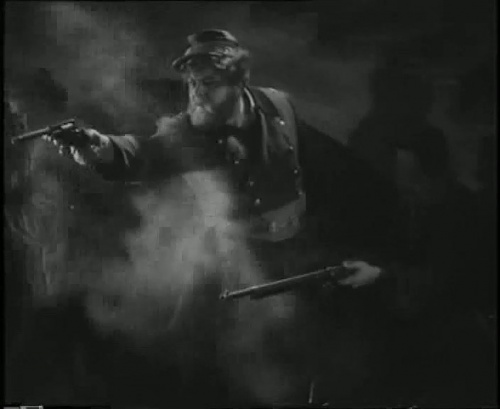 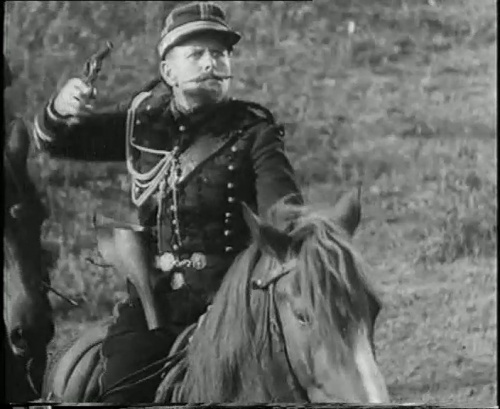 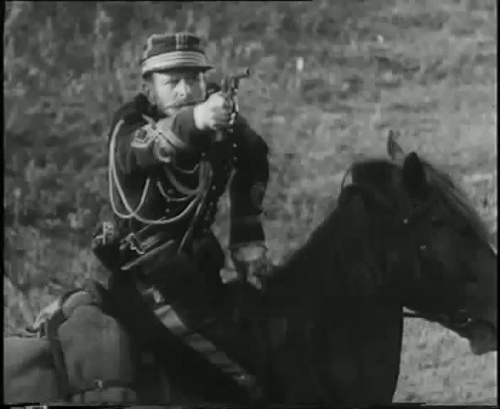 A female Communard is carries a big revolver, which seems to be a Glisenti M1874. 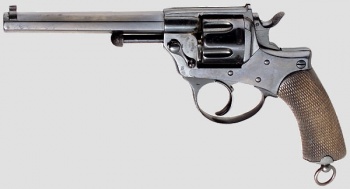 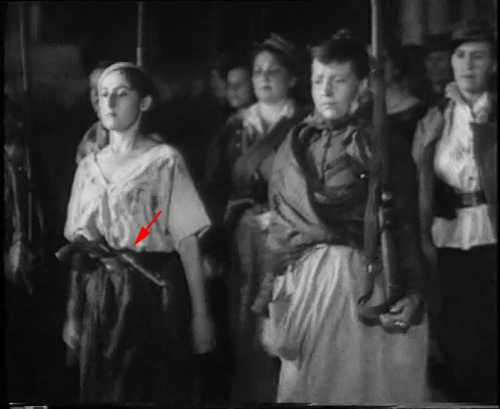 A female Communard at the left carries a revolver tucked at her belt. Next to her Mother Pichot (Vera Maretskaya) holds a Gras Model 1874 rifle.

What appear to be Percussion Cap Pistols of unclear model are briefly seen in hands of Paris National Guard soldiers. In one scene Monsieur Vesset (Naum Rogozhin) fires a percussion cap pistol. 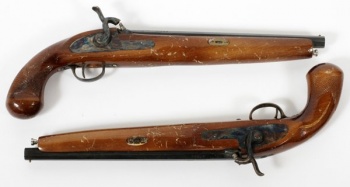 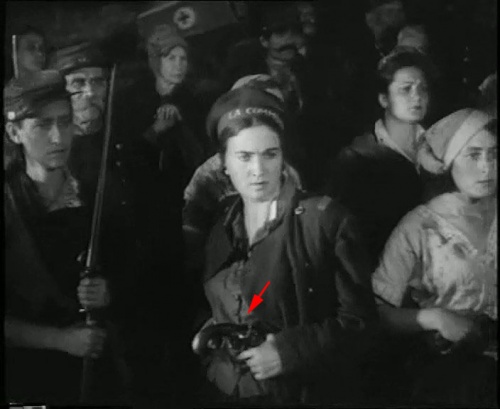 A female Communard in center carries a percussion cap pistol at her belt. 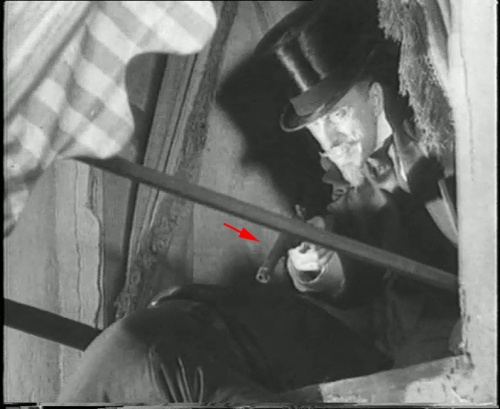 Vesset fires from the window.

Gras Model 1874 rifles are used by both Paris National Guard and French Army soldiers. They stand for historically correct Chassepot 1866 rifles that have very similar outlook. Gras rifles were highly available for filmmakers as 450,000 Gras were purchased by Russian Army during the WW1, and a lot of them were still at hand in mid-1930s. Most rifles are fitted with Mle 1874 bayonets though Mle 1866 Yataghan sword bayonets are also seen. 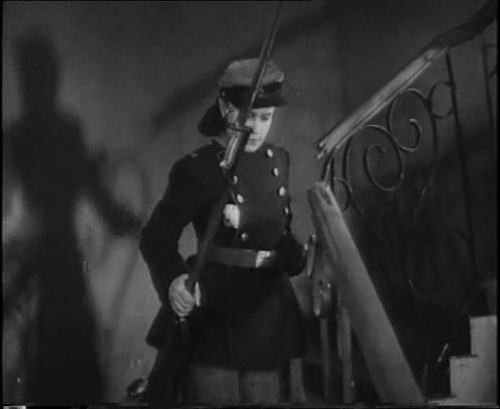 Catherine Millard (Antonina Maksimova), a female volunteer of National Guard, appears with a rifle in the opening scene. 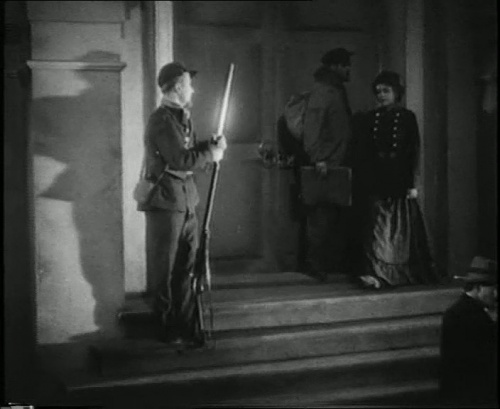 A centry at the gates of the city hall of Montmartre, one of the main centers of Commune. 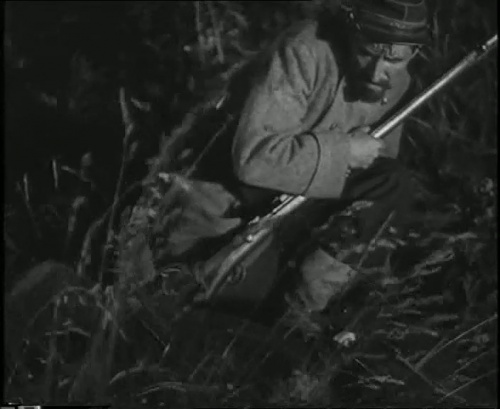 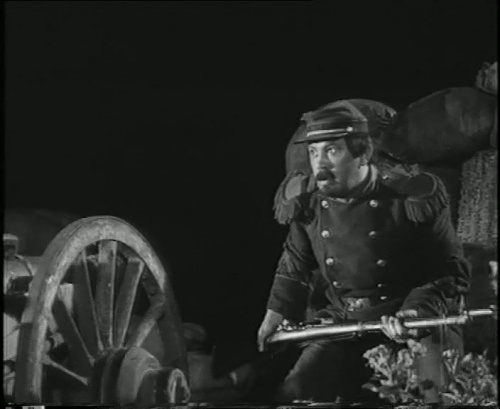 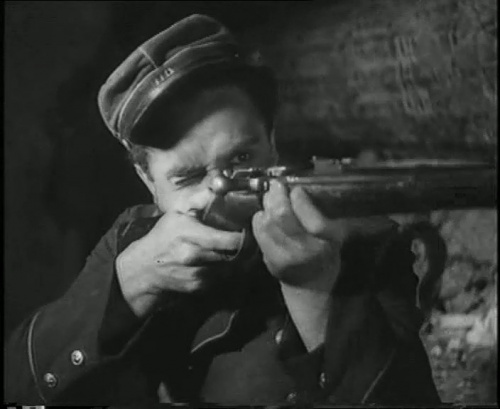 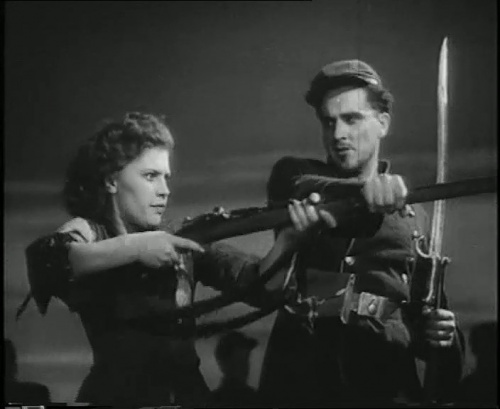 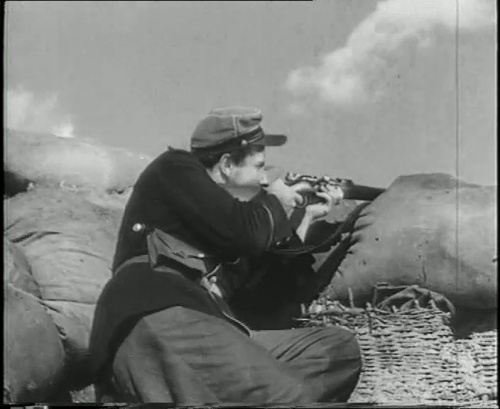 A National Guard soldier in action. 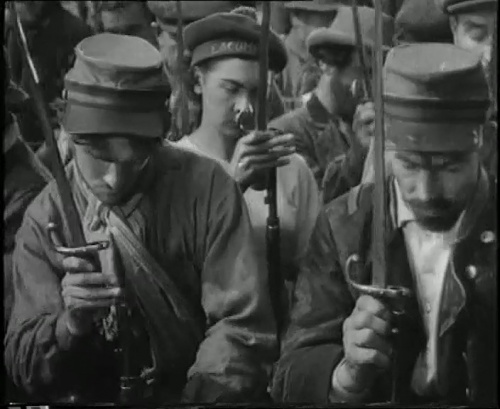 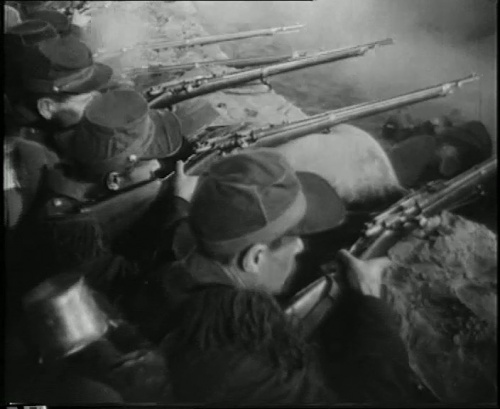 Soldiers of French Army fire a salvo during the battle for a barricade. 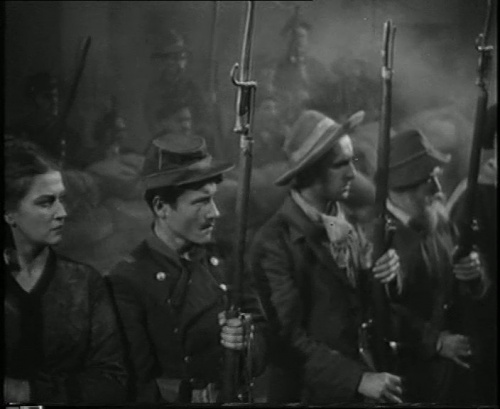 National Guard soldiers (Ivan Guzikov second from the left) and volunteers stand in formation during the funeral of General Jaroslav Dombrowski.

All cannons of National Guard are heavily outdated muzzle-loading smoothbore guns (the real cannons of the time of Franco-Prussian War and Paris Commune were breach-loading). The cannons appear to be genuine weapon of Napoleonic era, not mockups, used in movies of later times. Their size and shape match Russian M1805 12-pounder field gun. 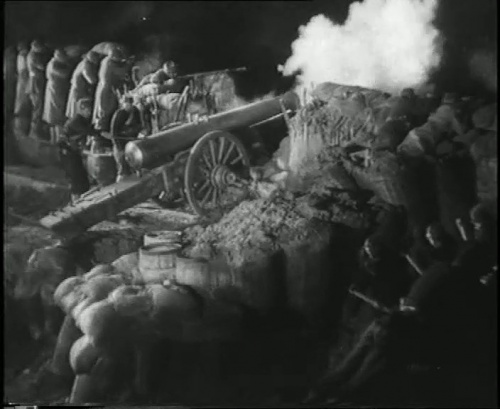 A cannon on position during the night battle. 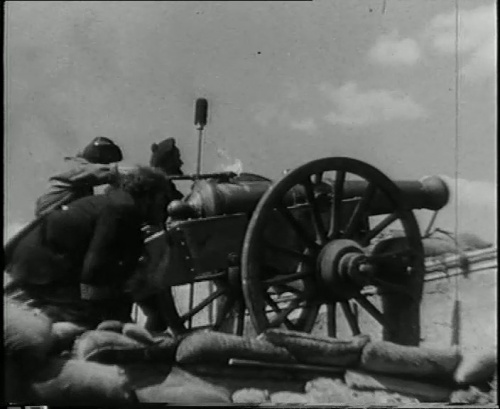