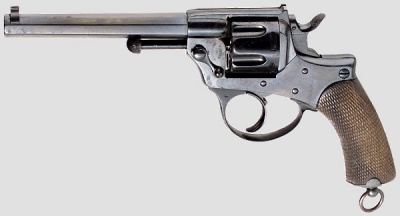 Glisenti M1874 (Italian service name was "Pistola a rotazione mod. 1874") is a Italian revolver. It was based on French Chamelot-Delvigne Model 1873 revolver and manufactured by Glisenti weapon factory until it was replaced with Bodeo M1889. A shorter version with folding trigger appeared in 1886.

The Glisenti M1874 and variants can be seen in the following films, television series, video games, and anime used by the following actors: