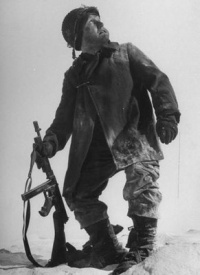 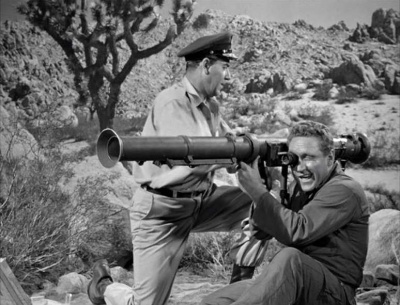 James Whitmore, as Sgt. Ben Peterson, enjoying himself a little too much, takes aim with a M20B1 "Super Bazooka in Them!.

James Whitmore (1921-2009) was an American stage, film, and television actor whose seven decade career included roles in such films as Them!, Tora! Tora! Tora!, and Guns of the Magnificent Seven. He was nominated for an Academy Award for Best Supporting Actor in 1950 for his debut role as Sgt. Kinnie in the World War II film Battleground and was also nominated for Best Actor in 1976 for his role as President Harry S. Truman in the feature film adaptation of the one-man show Give'em Hell, Harry! To younger audiences, he is perhaps best known for his role of Brooks Hatlen in 1994's The Shawshank Redemption. In addition, he served as a lieutenant in the US Marine Corps during World War II. He also was the father of actor/director James Whitmore Jr.