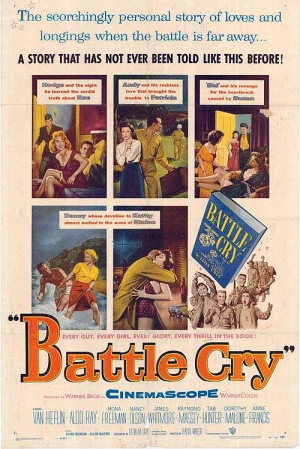 Battle Cry (1955) was directed by Raoul Walsh (The Big Trail, White Heat, The Enforcer) and was based on the novel by Leon Uris. The film stars Van Heflin, Aldo Ray, Nancy Olson, James Whitmore, Raymond Massey, Tab Hunter, Anne Francis, and Fess Parker and follows the 2nd Marine Battalion while relegated to mop-up tours in the Pacific until finally assigned to a dangerous mission on Saipan.

The following weapons were used in the film Battle Cry:

US Marines carry the M1911A1 pistol in combat.

The 2nd Battalion is welcomed to Guadalcanal after the battle is over.

Throughout the film, some Marines carry the M1 Carbine.

Korean War Era M1 Carbine, with Birch Stock, Adjustable sight, bayonet lug, and twin magazine pouch - .30 Carbine. Most of the World War II variations of the M1 Carbine were sent back to the Military Arsenals and retrofitted with the Bayonet Lug and adjustable rear sight.

The Marine on the left carries the M1 Carbine.

Marines carry the Browning Automatic Rifle into combat on Saipan.

Both Japanese soldiers and U.S. Marines use the Browning M1917 machine gun. 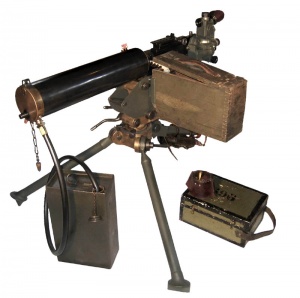 US Marine Sherman tanks have the Browning M2 machine gun mounted on top of the turret.

US Marine Sherman tanks have the Browning M2 machine gun mounted on top of the turret.

Battle line of Marine tanks. While the tank on the far right is a period correct Sherman, it appears that the rest of the tanks on the line are anachronistic M48 Patton tanks.

Marines set up a firing field with the M1 Mortar 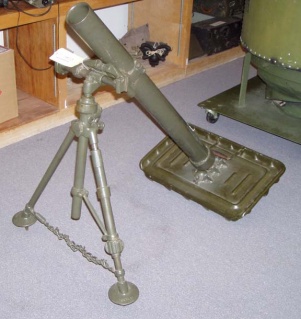 Marines use the M2 Flamethrower to flush out dug-in Japanese soldiers.

Marines use the M101 Howitzer in combat. 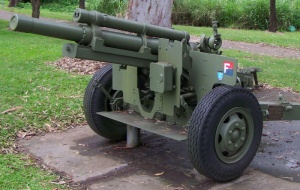 Japanese soldiers use the M116 Howitzer in combat. 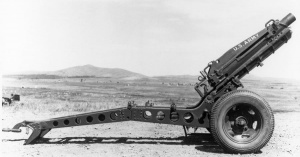