In a Valley of Violence

In a Valley of Violence is a 2016 Western movie directed by Ti West and starring Ethan Hawke, Taissa Farmiga, James Ransone, Karen Gillan, and John Travolta. Paul (Hawke), ex-cavalryman turned tramp, enters a small town in the Wild West. Here, he confronts Deputy Gilly Martin (Ransone) and Gilly's father, the Marshal Clyde Martin (Travolta). The only person who helps Paul is Mary-Anne (Farmiga) who works at the local hotel.

The following weapons were used in the film In a Valley of Violence:

A priest (Burn Gorman) whom Paul (Ethan Hawke) confronts twice carries a Smith & Wesson "Wells Fargo" Schofield revolver. Both times Paul disarms the priest, and after the second conflict he takes the revolver for himself and uses it until the finale. This revolver is also seen on the film poster. 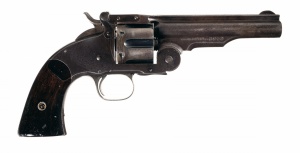 The priest threatens Paul during their first encounter.

Paul picks up the revolver.

Paul in turn threatens the priest.

Paul holds the revolver that he took from the priest following their second encounter.

A good view of Paul's revolver.

Paul aims his revolver during the showdown. 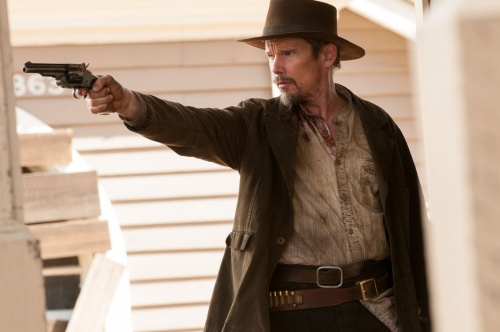 Deputy Gilly Martin (James Ransone) carries a Remington 1858 New Army revolver. Deputy Tubby (Tommy Nohilly) is also armed with a Remington 1858 New Army but his revolver has a brass frame and appears to be a modern and unauthentic replica, known as a "Texas Model". Both revolvers are cap and ball guns, not cartridge conversions, but no percussion caps can be seen on screen.

Gilly Martin draws his revolver during the scene in the saloon.

Another view of the same scene. The chambers of the cylinder are empty, and rust can be seen inside the muzzle.

Tubby with a Remington 1858 with brass frame and Roy (Larry Fessenden) with a Colt 1851 Navy during the confrontation with Paul on the town's street.

Tubby holds his revolver while hiding in the hotel.

Tubby falls down, the revolver in hand. The plugs in the chambers may be used to imitate the loaded cap and ball revolver.

Gilly dual-wields Colt 1851 Navy and Remington 1858 New Army revolvers when he readies to enter the street for the showdown. When he is seen on the street in the next scene, he holds a Colt 1860 Army (see below) instead of the Remington.

A Colt 1851 Navy with a brass frame is one of the revolvers used by Deputy Gilly Martin (James Ransone). Similar looking revolvers (possibly the same prop reused) are also seen in the hands of Deputies Roy (Larry Fessenden) and Harris (Toby Huss). The Colt Navy is a cartridge model, but retains the external features of the original percussion cap version.

Colt 1851 Navy with a cartridge conversion. This is a reproduction of the gun used by Eli Wallach in The Good, The Bad, and The Ugly and imported by Cimmaron Arms.

Roy aims his revolver during the conflict with Paul on the town's street.

Gilly dual-wields Colt 1851 Navy and Remington 1858 New Army revolvers when he readies to enter the street for the showdown. It can be seen that the revolver is a cartridge version. Note the plugs in the chambers of the Colt, possibly used to imitate a cap and ball gun.

Another view of Gilly's revolvers.

Gilly aims his revolvers. The Remington switches to a Colt 1860 Army due to a continuity error. The Colt Navy now lacks the previously seen plugs in the chambers. 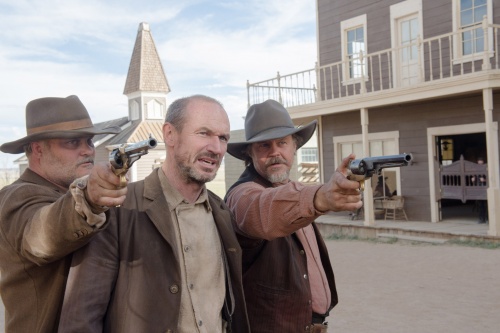 A promotional image shows Tubby (Tommy Nohilly) with a Remington 1858 New Army and Roy (Larry Fessenden) with a Colt 1851 Navy.

A Colt 1860 Army is one of the revolvers used by Deputy Gilly Martin (James Ransone). Mary-Anne (Taissa Farmiga) takes this revolver in the final scene. The revolver is a cartridge version but retains the external features of the original percussion cap version, like the abovementioned Colt 1851 Navy.

Gilly Martin holds the Colt 1860 Army during the night attack on Paul's camp.

Another view of the revolver in the same scene.

The Colt 1860 Army is seen when Harris takes the firearms from the marshal's office.

Another view of the marshal's revolver. 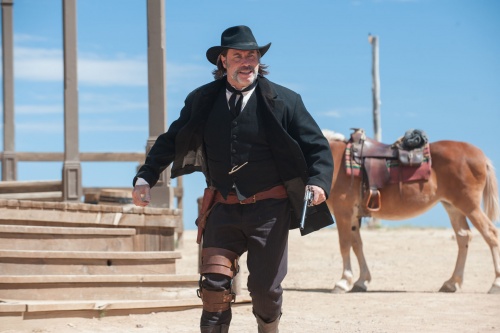 The marshal's "Cavalry" revolver is seen on a promotional image. 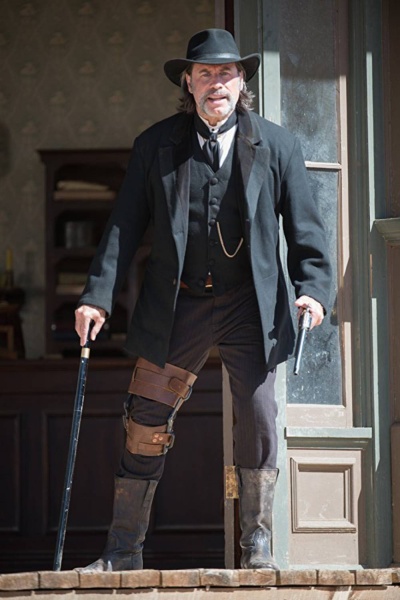 The marshal's "Cavalry" revolver is seen on a promotional image.

Close-ups of one of Baxter's revolvers.

Both revolvers are seen.

Gilly Martin takes one of the revolvers from Baxter.

He mockingly aims at Deputy Harris.

The revolver is seen from the muzzle when Gilly aims at Paul.

Harris holds the Winchester when he takes the guns from the marshal's office. The saddle ring is seen.

Harris on the rooftop.

Paul gets the rifle from Harris and now holds him at gunpoint.

Paul (Ethan Hawke) carries a Springfield "Trapdoor" Carbine during the encounter with the priest. He is also seen with the same gun in a flashback scene showing him during the American Indian Wars. The shape and position of the rear sight match Models 1884 or 1888 rather than Model 1873 that is more common on screen.

Paul carries his carbine in the saddle holster.

Paul rests with the carbine at hand.

Harris (Toby Huss) grabs the carbine during the night attack on Paul's camp.

Paul holds the carbine in a flashback scene.

Paul holds his carbine. Note the attachment of the gun sling to the trigger guard.

In the climactic scene Marshal Clyde Martin (John Travolta) is armed with a Sawed-Off Double Barrel Shotgun. This gun is also seen on the film poster.

The marshal with the shotgun.

In one scene, every gun taken from the marshal's office is seen.

Colt 1851 Navy with a cartridge conversion