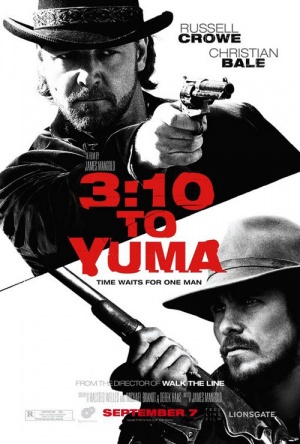 3:10 to Yuma is the 2007 remake of the 1957 Western of the same name, which was adapted from an Elmore Leonard short story. The remake was directed by James Mangold and starred Russell Crowe and Christian Bale.

The following weapons were used in the film 3:10 to Yuma:

Dan Evans (Christian Bale) carries a Spencer 1860 Carbine chambered in .56-56 in the film. In a couple of scenes we also see his son William (Logan Lerman) carrying the Spencer.

Screen used Spencer 1860 Carbine - .56-56. This firearm was held and used by Christian Bale and Logan Lerhman in the film.

Dan drops his Spencer 1860 when trying to put out the fire in his barn.

Dan uncocks his Spencer 1860 when confronting Ben Wade and his gang.

Dan aims his Spencer at Charlie Prince when he rides through town, firing at people.

Dan aiming his Spencer out into the plains at night.

Campos aiming his Colt 1855 Revolving Rifle. In top corner is a first-person view through scope.

Campos firing his Colt Revolving Rifle at the coach.

Campos shoots the driver of the decoy coach.

Campos with his Colt Revolving Rifle.

Campos firing his Colt Revolving Rifle at Dan as he waits for the train.

One of Weathers' deputies places a Henry 1860 on the ground when surrendering to Wade's gang.

One of the deputies surrenders his Henry 1860 (right).

Seen above Dan Evan's (Christian Bale) Spencer carbine on his rifle rack is a Springfield 1861 rifle. The Indians that attack the group in the canyons use saddle ring carbine versions of these rifles. Ben Wade (Russell Crowe) takes these rifles back to the group after killing them.

A Springfield 1861 rifle is seen on Dan's rifle rack.

The Apaches that fire on the group in the canyons use Springfield 1873 Saddle Ring Carbines. Ben Wade (Russell Crowe) liberates one of them when he kills the natives and returns to the group.

An Apache gets shot by Wade holding what looks like a Springfield Saddle Ring Carbine.

The Springfield Carbine slung on Wade's back.

Both of the gunners inside the coach are armed with Winchester 1873 Saddle Ring Carbines. Doc Potter (Alan Tudyk) also carries one of these rifles while at Dan Evan's (Christian Bale) house, waiting for a new wheel for the coach. Ben Wade (Russell Crowe) is seen carrying one of these rifles back after killing the attacking Apaches.

The second gunner readies his Winchester 1873.

A deputy readies his Winchester 1873.

Doc Potter with a Winchester 1873.

Wade with a Winchester '73 rifle taken from an Indian.

Another gang member, Sutherland, holds a Winchester '73 while telling Prince he may not get a chance to draw his Schofields because of the townspeople.

A Winchester 1866 "Yellow Boy" is used by one of the town members when Charlie Prince (Ben Foster) offers $200 to each man willing to shoot Dan Evans (Christian Bale) before he can take Ben Wade (Russell Crowe) to the 3:10 train to Yuma.

Prince kills the town member when he begins to shoot too close to Wade.

Dan loads up his Colt 1851 Navy with a Richards-Mason conversion before heading out.

William packs his Colt 1851 Navy into his rucksack before heading out to follow his father.

William holds his Colt 1851 on Ben Wade when Wade gets the drop on the group.

Dan with his Colt 1851 drawn as he escorts Wade to the train station in Contention, all while under heavy fire.

Dan shoots one of the town members in the face with his Colt 1851. Ouch.

Single Action Army revolvers are carried by several characters in the film, most notably Ben Wade (Russell Crowe), whose gun has custom grips with gold crosses, nicknamed "The Hand of God". The gun is said to be cursed as anyone who touches it other than Wade dies. Wade keeps the gun in a special holster designed by Will Ghormley to have the old time look mixed with the advantages of modern quickdraw holsters (see here for more information). Crowe was trained in the film by Thell Reed, a world renowned quick draw shooter labeled "Fastest Gun Alive" by the Colt company, who has worked as a weapons trainer in many films. 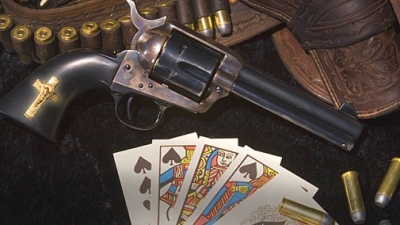 One of the Single Action Army "Hand of God" live-firing revolvers used by Russell Crowe as Ben Wade in the film. 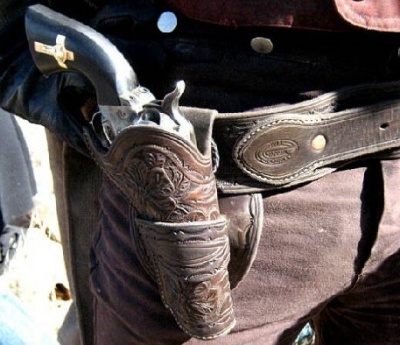 Darden (Johnny Whitworth) shoots out the lock in the coach with his Quickdraw Single Action Army.

A coach member jumps Darden and holds his Cavalry Single Action Army on him. 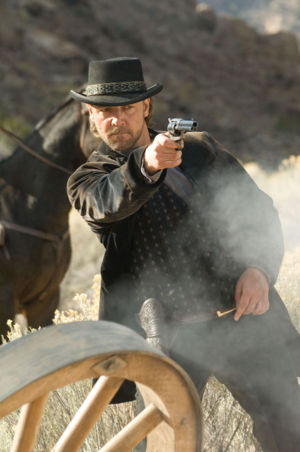 Ben Wade fires the Hand of God at the two men. Note how this promotional image is used for the film poster.

Wade reloads the Hand of God as he walks up to the wounded Darden, after shooting him in the throat for "Endangering his crew." He also doesn't use the ejector rod to push the shells out.

Tucker (Kevin Durand) admires Wade's SAA after they apprehend him.

Two deputies fire their SAAs at Prince as he rides through town.

The Apache, as he's referred to by Prince (Ben Foster), fires his Quickdraw SAA at Dan in Contention.

One of Wade's gang members with two Cavalry SAAs at the ready.

After all of his gang touches his gun, Prince tosses it to Wade. Remember the curse?

Wade kills all the members of his gang.

Screen Used Schofield Model 3 - .45 Schofield. This is one of the pair used by Charlie Prince (Ben Foster) in the film. 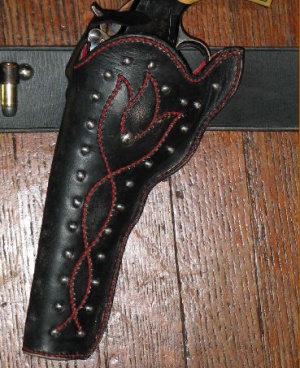 Reproduction of one of Charlie Princes' holsters, also designed by Ghormley. 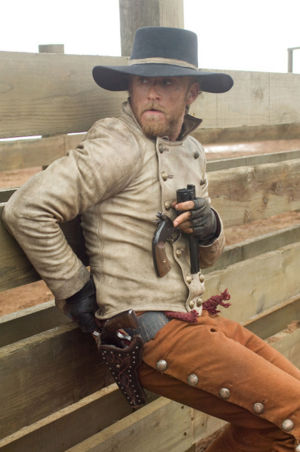 Prince checks his Smith & Wesson Schofield before assaulting the coach.

Prince kills one of the dying coach guards with his Schofield, aiming away from him to prevent blank injury. A camera trick is used to make it seem like he aims for him. 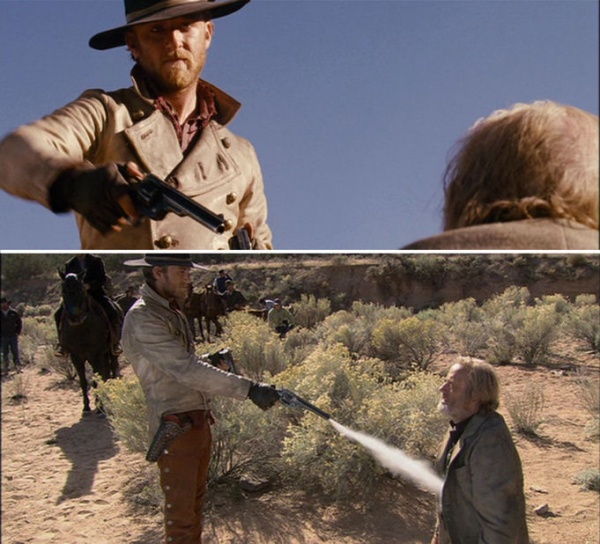 Prince shoots McElroy in the gut, top is from the film, bottom is from the special features.

Prince fires his Schofield at Dan on the roof.

Prince with his Schofield.

Wade holds Prince's Schofield on him.

Weathers places his Colt 1860 Army on the ground.

One of Weathers' deputies places a Spanish-made S&W Model 3 clone with a lanyard ring on the ground when surrendering to Wade's gang. 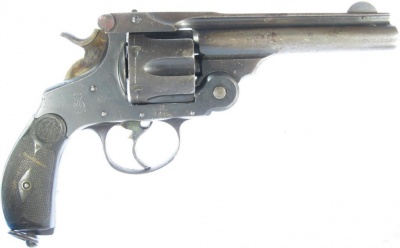 A deputy places his revolver on the ground (center).

Tucker (Kevin Durand) keeps a Remington 1875 as his sidearm in the film. Many of the paid town members in Contention also use 1875 revolvers when trying to kill Dan Evans (Christian Bale).

Tucker with his Remington 1875 drawn when he apprehends Wade.

A town member gets shot by Dan while holding a Remington 1875.

Another town member with a Remington 1875.

The Spencer 1882 shotgun is carried by one of the deputies who apprehends Ben Wade (Russell Crowe).

A deputy with a Spencer 1882 shotgun.

The deputy holds his Spencer 1882 shotgun on Wade.

The deputy walks Wade out of the bar. 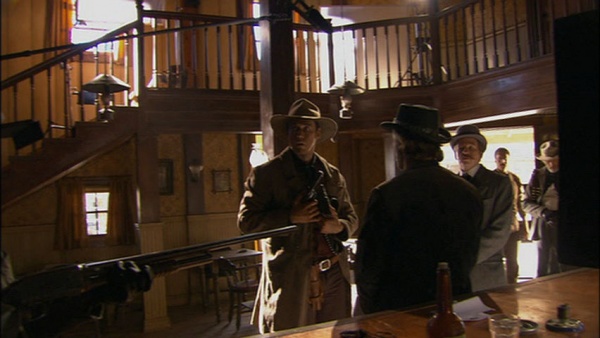 A good shot of the Spencer 1882 in the special features.

A Colt 1878 double barreled shotgun with the barrel sawed down to short length is carried by Byron McElroy (Peter Fonda) until his death and later by Dan Evans (Christian Bale).

Screen-used stunt (hard rubber with a metal armature within) Colt 1878 from 3:10 to Yuma. Image from Prop Store of London.

Opposite side view of the stunt Colt 1878 from 3:10 to Yuma. Image from Prop Store of London.

A close-up of the receiver (bearing stampings for gun manufacturer Interarms) of the stunt Colt 1878 from 3:10 to Yuma. Image from Prop Store of London.

McElroy fires his Colt 1878 at Wade's men. Based on the location of the bead sight, this shotgun was built to be genuinely sawed down by the reproduction company.

McElroy dumps the brass shells out of his Colt 1878.

Continuity error: Prince tips open the shotgun twice, but the sound effect is only heard once.

Wade takes McElroy's shotgun and throws him off a cliff when he insults his mother.

Dan takes cover from the Indians while holding the shotgun.

Dan shoots a pack of dynamite in mid-air to block the posse from pursuing them.

Dan clutches the shotgun while waiting to take Wade to the train station.

Dan shoots a town member with the shotgun.

One of the town members uses a Stevens and Co. 1878 shotgun to shoot at Dan Evans (Christian Bale).

J. Stevens and Company Side by Side Shotgun (Circa 1878) exposed hammers and designed to fire Black Powder shotgun shells - 12 Gauge.

A town member is killed by Prince when he shoots too close to Wade with his Stevens and Co. 1878 shotgun.

Mounted on the coach turret is a Colt 1874 Gatling Gun fitted with a 35 round magazine, which is fired by the two gunners before they are both killed. Another gunner climbs out and fires it before the coach is flipped. The gun used in the film was supplied by key armorer Thell Reed, who also trained the actors how to use it as the gun coach. A rubber prop gun was also used in the film for scenes when the weapon was at risk of being damaged.

Close up of the barrel on the Gatling Gun.

The two gunners fire the Gatling at Wade's gang.

The remaining gunner fires the Gatling. 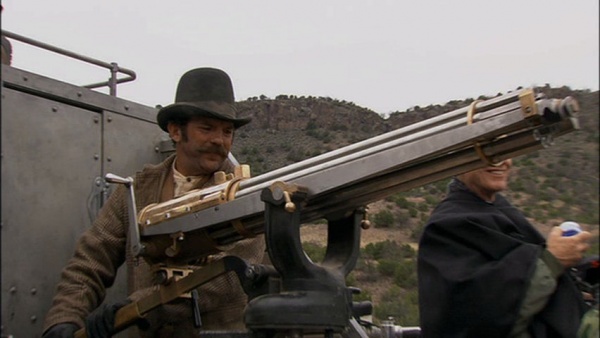 The actor mans the Gatling Gun behind the scenes. 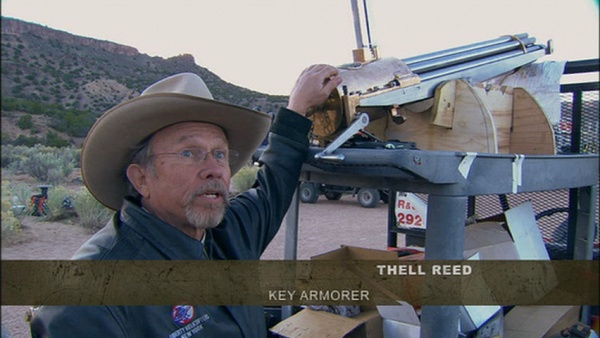 Thell Reed shows of the Gatling Gun used in the film. 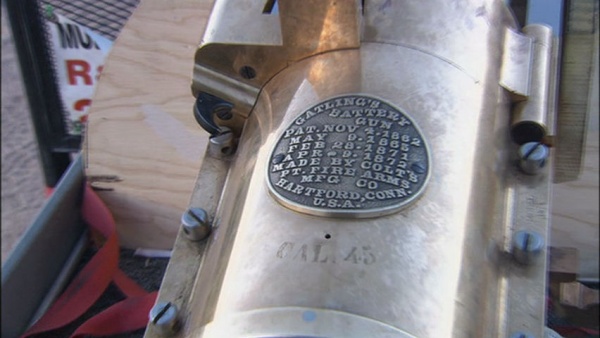 A great shot of the gun's markings. Caliber is obviously .45. 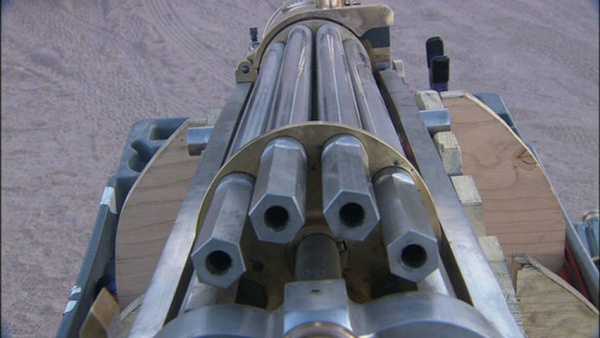 The barrels of the Gatling. 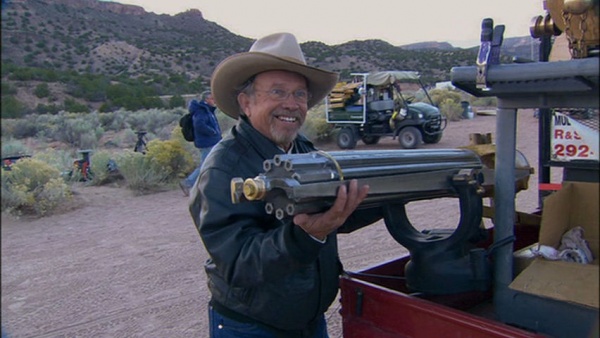 Reed shows off the rubber stunt Gatling, which is considerably lighter than the 400lb real gun.
Retrieved from "https://www.imfdb.org/index.php?title=3:10_to_Yuma_(2007)&oldid=1287633"
Categories: