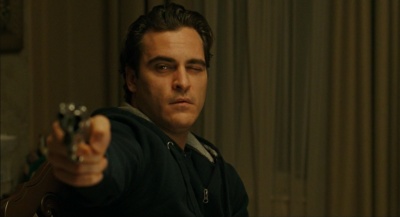 Joaquin Phoenix aims a nickel Smith & Wesson Model 60 as Bobby Green in We Own the Night.

Joaquin Phoenix (born Leaf Phoenix) is an American actor who has appeared in such films as We Own the Night and The Yards. He received Academy Award nominations for his turns in the films Gladiator, The Master, and Walk the Line, a film for which his portrayal of singer Johnny Cash also garnered him a Golden Globe Award for Best Actor – Motion Picture Musical or Comedy. In 2019, he took on the role of the Joker in the Martin Scorsese-produced feature film Joker, for which he received the Academy Award for Best Actor. He also is the brother of the late actor River Phoenix.