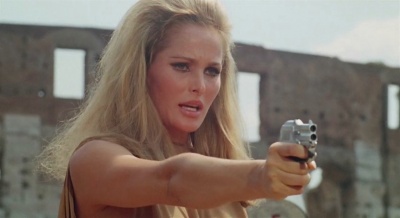 Ursula Andress (born 19 March 1936, Ostermundigen, Canton of Bern) is a Swiss actress who began her career as a model in Paris. She became famous for her role as Bond girl Honey Rider in the first official James Bond film Dr. No in 1962. She would later star in another (unofficial) Bond film Casino Royale (1967), where she played the character Vesper Lynd. She won a Golden Globe Award for Newcomer of the Year (1964). In 1995 Empire magazine ranked her among the "100 Greatest Sex Symbols of film history."