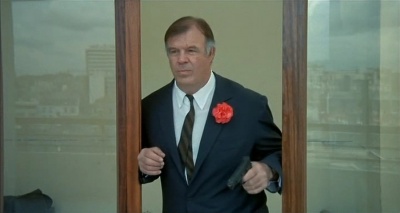 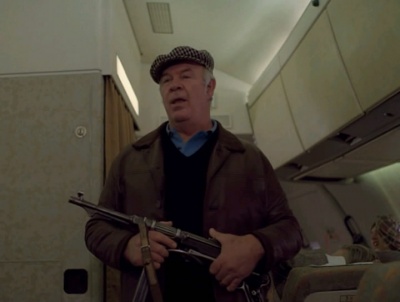 Jess Hahn with an MP38 as the second hijacker of the French airplane in Teheran 43 (1981).

Jess Hahn (born 29 October 1921 at Terre Haute in Indiana, USA as Hahn Jesse Beryle) is a leading American naturalized French actor. He spent most of his career in France, usually as American characters, often as henchman, gangster, soldier ... in Cartouche (1962), Up to His Ears (Les tribulations d'un Chinois en Chine) (1965) or The Great Spy Chase (Les Barbouzes) (1964). Since the early seventies, Jess Hahn began to appear frequently on television, mainly in the series, while the number and most important roles in the film is rapidly decreased. Rarely get to participate in valuable films, but only in small roles - Rum Runners (Boulevard du Rhum) (1971), Teheran 43 (1981) etc.. Since the early 80 Jess Hahn years rather avoid work and live in the privacy of their rural farm in Brittany. Jess Hahn died in Saint-Malo on the 29th June 1998 at the age of 76 years. In the French film after it has remained nearly one hundred roles. He died 29 June 1998 in Saint-Malo.