A Bullet for the General

A Bullet for the General (original title El Chuncho, quién sabe? or simply Quién sabe? that means "Who knows?") is a 1966 Italian action movie directed by Damiano Damiani. The story takes place during the Mexican revolution (1910-17).

The following weapons were used in the film A Bullet for the General:

The grip of the revolver is seen.

A close view on the Single Action Army.

The personal weapon of Bill Tate (Lou Castel), called "Niño" ("The Kid") by his Mexican comrades in arms, is Smith & Wesson Military & Police revolver carries in shoulder holster. Military and Police revolvers are also seen in hands of several Mexican officers. The movie was filmed in Spain so these revolvers can actually be Spanish copies of "Military and Police" (like "Ruby Extra" by Gabilondo, "Alfa" by Armero Especialistas Reunidas and various models by Orbea Hermanos).

Bill Tate (Lou Castel) holds his revolver in the scene in the train.

A close view on Tate's revolver.

Tate shows how to shoot a revolver with chained hands.

A grip of Tate's revolver can be seen.

Tate shoots his revolver at a governmental officer.

A Mexican officer, who is in charge of the firing squad, fires his S&W at the man sentenced to death after the soldiers missed.

A Mexican officer aims his revolver at bounded El Chuncho.

Most governmental troops and guerrillas are armed with Spanish Mauser M1893 rifles.

Mexican soldiers with Mauser M93 rifles. A close view on the bolt.

Mexican soldiers with Mauser M93 rifles in the train.

Another close view on the bolt.

El Chuncho (Gian Maria Volonté) aims his rifle at the Mexican governmental officer. Note that he raised the sight which is common in real life but rarely seen in movies.

An open bolt of the rifle is seen.

A soldier with Mauser rifle with bayonet.

El Chuncho trains peasants how to handle a rifle. 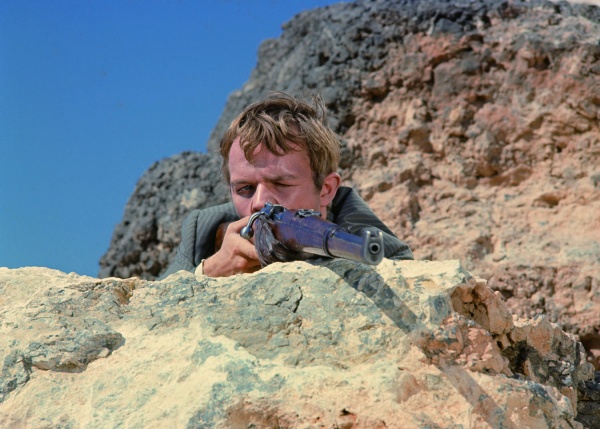 The carbine is seen better on a promotional image.

Uberti replica of a Winchester 1873 rifle

One of El Chuncho's men with Winchester Model 1873.

Many of El Chuncho's men are armed with Garate El Tigre rifles. These Spanish copies of the Winchester Model 1892 Saddle Ring Carbine are often seen in Spaghetti Westerns.

One of El Chuncho's men with Garate El Tigre.

A close view on the Garate El Tigre.

Bill Tate (Lou Castel) readies Hotchkiss M1914 for battle. El Chuncho (Gian Maria Volonté) lubricates the 24-round strip. This process was necessary for the proper functioning of the machine gun. The caliber looks strangely small even for Spanish 7mm.

Bill Tate with reloaded 24-round strip.

In the scene of attack on fort El Santo (Klaus Kinski) use grenades of "Pineapple" type. It is hard to identify them correctly.

The cartridge with the golden bullet.

The golden bullet taken out of the body of the man killed by Tate. 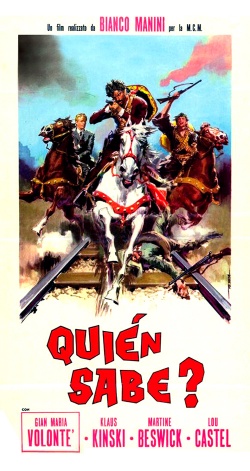 Origial Italian poster for the movie.
Retrieved from "https://www.imfdb.org/index.php?title=A_Bullet_for_the_General&oldid=1492182"
Categories: