Showdown at Boot Hill is a 1958 B&W Western movie directed by Gene Fowler Jr. and starring Charles Bronson as Deputy Marshal Luke Welsh who comes to Mound City, hunting for outlaw Con Maynor. When Welsh outguns Maynor, he needs a statement identifying the man, but Maynor was well liked in Mound City, and neighter the Judge, nor any of townsmen wants to sign such a statement. Tensions grow as locals begin to speak that they don't want Marshal in their town. Meanwhile Luke makes a love interest in Sally Crane (Fintan Meyler), a quiet and modest girl serving as a maid in the hotel.

The following weapons were used in the film Showdown at Boot Hill:

Con Maynor draws his gun but Luke Welsh is faster.

Welsh knocks the revolver out of Sloane's hand with a perfect shot.

Welsh returns fire when he gets fired on by Sloane's henchmen.

A close view of Welsh's revolver in same scene.

Les Patton claims that he is the fastest gun and smashes with a shot a glass thrown into the air.

Sheriff Hinkle tries to stop the mob, instigated by Sloane against Luke Welsh.

Sloane and Tex with revolvers in hands. 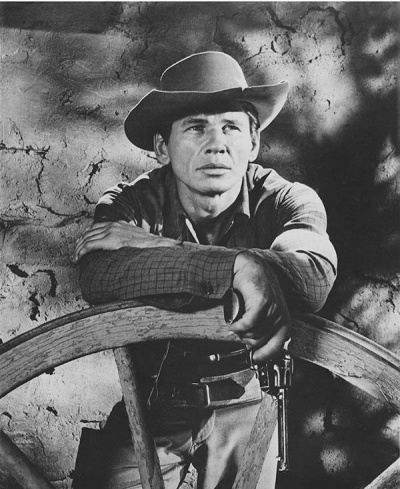 Charles Bronson holds his revolver on a promotion still.

Corky carries a revolver in holster.

Corky's revolver is seen when the mob breaks in the hotel.

A townsman at the left holds an "Artillery" revolver.

Corky aims at Sheriff Hinkle who tries to stop Sloane and his men.

Sloan with Civilian revolver and Corky with Artillery revolver.

When the armed mob, instigated by Sloane, gathers and bursts into the hotel, several men carry Winchester Model 1892 Saddle Ring Carbines. Con Maynor's brother Charles Maynor (George Douglas) takes a rifle from his cart when he joins the mob; this gun is also supposed to be a Winchester 1892 but it is seen too unclear.

A townsman at the right holds a Winchester.

Same man with his rifle in hands stands behind Sloane.

A Winchester in hands of another townsman is seen in center.

When Les Patton (Mike Mason), wounded in shoulder by Luke Welsh during Patton's attempt to prove his superiority, hears the rumble next to his room, he grabs a Colt Model 1878 double barreled shotgun from the wall and tries to make his revenge on Luke Welsh.

Les Patton, very weak due to his wound, takes the gun but falls on the floor.

Les with the shotgun.

Les breaks in the room. 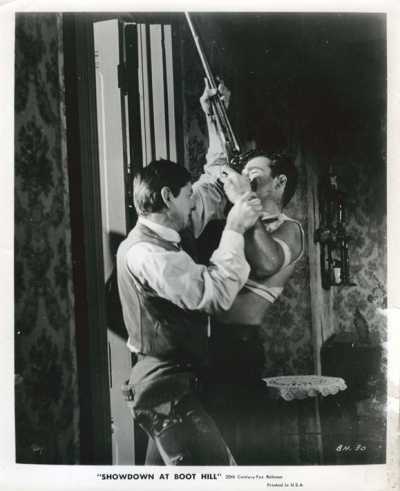 A promotion still shows the grapple of Les Patton and Luke Welsh for the shotgun.
Retrieved from "https://www.imfdb.org/index.php?title=Showdown_at_Boot_Hill&oldid=1324436"
Categories: