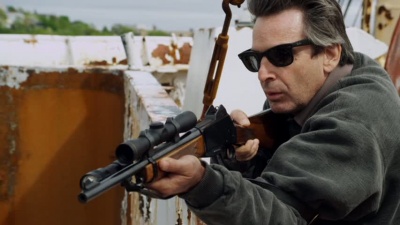 Robert Carradine as Arthur Gallery with a Browning BLR 81 in Jesse Stone: Benefit of the Doubt (2012).

Robert Carradine as Slim holds the Springfield 1873 "Trapdoor" Carbine in The Cowboys.

Robert Carradine is an American actor who has appeared in such films as The Cowboys, The Big Red One and The Long Riders in addition to his well known role as Lewis Skolnick in the 1984 film Revenge of the Nerds and its three sequels. Robert also is part of a family of actors which includes his father John Carradine, his brothers David Carradine and Keith Carradine, as well as half-brother Michael Bowen.