Adopted by Germany in 1942, in an effort to reduce the machining time and cost inherent in the production of the MG34, the MG42 (MG standing for Maschinengewehr, literally "Machine Rifle" but usually translated as "machine gun" in this context) is perhaps the deadliest machine gun used during the war. Geared for mass production above all else, it was designed to take full advantage of modern production techniques such as replacing machined components with stamped ones; one of the key figures in the project, Ernst Grunow, had no prior experience in firearm design whatsoever and worked for Großfuß AG, a company that normally made sheet-metal lanterns.

The result was a weapon that took 50% fewer man hours to build than the MG34 and cost 24% less. Light weight and great reliability made it one of the first true modern general purpose machine guns, able to be used in the light machine gun role on a bipod or the medium machine gun role on a tripod. The light weight of operating components make the MG42 one of the fastest-firing single-barrel guns which does not require an external power source; with a cyclic rate of 1200 rounds per minute, individual shots are mostly indiscernible. The rate is so fast that even a trained operator has trouble firing a single shot from the full-auto only gun. The distinctive sound led to nicknames such as "Hitler's buzzsaw." The MG42 also features an extremely fast barrel change system, allowing sustained fire even with the extremely high fire rate.

The weapon was issued in the light machine gun role with an ammo drum containing a 50-round belt (the same one used on the MG34), while in the medium role the MG42 typically used 250-round belts. The gun is chambered in the 7.92x57mm Mauser cartridge (also known as 8mm Mauser), the same cartridge used in the well known K98k infantry rifles, and ammunition is interchangeable (though Kar 98 ammunition was not issued in belts, making this of limited use in practical terms). Machine gun ammunition was slightly more powerful in order to avoid jams and run the mechanism more reliably.

The MG42 and variants can be seen in the following films, television series, video games, and anime used by the following actors: 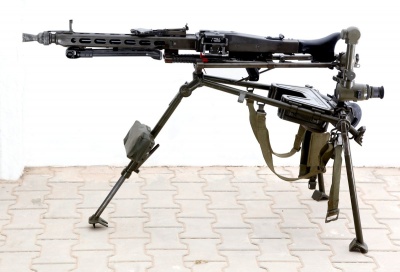 MG74 - 7.62x51mm NATO. This is an Austrian variant of the MG42 manufactured by Steyr Mannlicher. 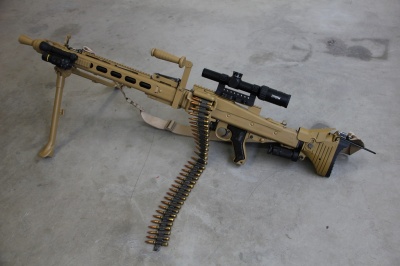 The MG3 is an updated version of the MG42, chambered in 7.62x51mm NATO and first introduced in 1958. Changes include a chrome-lined barrel, a new friction ring buffer, an improved feeding mechanism, recalibrated sights and NATO compatibility. Some versions feature a heavier bolt to reduce the rate of fire, allowing the MG3 to be fired from the shoulder more easily.

The MG3KWS (German: Kampfwertsteigerung; lit. "Combat improvements") is a modernized variant of the MG3, developed by Rheinmetall and Tactical Groups. It was designed as a substitute until the Heckler & Koch MG5, a 7.62x51mm NATO variant of the MG4, could be able to fully supplant all MG3s currently in service. The MG3KWS has many distinguishing features from the original MG3, such as a Picatinny rail system on top of the receiver and heat shield hand guard, an adjustable cheekpiece, a shoulder rest, a revised bipod, and a unique carry handle which doubles as a foregrip.

The MG 45 (also known as the MG42V) was a machine gun based on the MG42, which was developed but not fielded in significant numbers by the German Army in World War II.

The MG45 and variants can be seen in the following films, television series, video games, and anime used by the following actors:

After WWII, this MG 42 variant was built in Yugoslavia as the M53 machine gun using original German machinery, retaining the 7.92x57mm Mauser caliber. Because of this, the original weapon's design features were retained, making the M53 a near exact copy of the German MG 42. The only major difference is a slower rate of fire.

The Zastava M53 and variants can be seen in the following films, television series, video games, and anime used by the following actors:

A Spanish-made light machine gun externally based off the MG42/MG3, designed by CETME (Centre for Technical Studies of Military Equipment), chambered in 5.56x45mm NATO. It is basically a miniaturized version of the the full sized MG42/MG3 with some modern design changes.

It has been in service from 1982 to the present day. Despite its very close external resemblance to the German MGs, the weapon operates using a roller-locked delayed-blowback mechanism as opposed to the more simple roller-locked system, similar to the the vast majority of Heckler & Koch weapons.

The weapon is used with 100 or 200-round belts. A STANAG magazine adaptor that replaced the belt feed cover was also made for the Ameli, which and was rarely used.

The CETME Ameli and variants can be seen in the following films, television series, video games, and anime used by the following actors: