Machine Gun Preacher is a 2011 American action drama that tells the true story of Sam Childers, a drug-dealing biker who found God and later became the savior of hundreds of Sudanese orphans and child soldiers. Gerard Butler stars as Childers, and the film is directed by Marc Forster (Quantum of Solace and World War Z).

The following weapons were used in the film Machine Gun Preacher:

The five-shot cylinder is seen here.

An LRA member with a PPS-43 during the prologue.

The SPLA soldier in the background has a PPS-43.

The SPLA soldier in the middle has a PPS-43 with the stock extended. 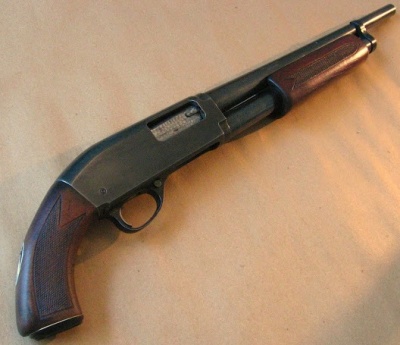 Donnie (Michael Shannon) with his shotgun. This is the best view of it in the film.

Sam grabs a Mossberg 500 from his personal collection.

A Mossberg 500 can be seen on the left in the cabinet.

Sam (Gerard Butler) uses a Norinco Type 56-1 as his primary weapon for much of the film. Troops from both sides are seen using this gun as well.

Sam with his rifle.

Sam with his rifle.

William (Junior Magale) can be seen with a genuine AKMS.

William (Junior Magale) with his AKMS. Note the narrow front sight, stamped stock and unported gas tube which distinguish this from the more common Norinco Type 56-1s seen in the film.

William's AKMS is seen from the front. Note the open front sight.

Deng's R5 on his bed. Note that for this non-firing scene, it would appear that a real bakelite AK-74 magazine has been shoved into the magazine well.

Sam checks the chamber, noting that it's dirty and needs cleaning.

Deng (Souleymane Sy Savane) provides covering fire for Sam. Since this scene involves the rifle firing, a real R5 magazine, which has been painted orange, is used.

This view shows the cuts and shape of the R5 receiver.

Vektor R4 (Mocked up as AKMS)

Marco (Mduduzi Mabaso) uses a Vektor R4 mocked up as an AKMS for much of the film. Deng also hands Sam one during the night attack on the orphanage.

Vektor R4 assault rifle of the South African forces with 50-round magazine - 5.56x45mm

A child soldier with a Type 56. Note that his sling appears to be a braided leather belt.

A wounded LRA member lies next to his Type 56.

Vektor R4 (Mocked up as AKM)

Various characters from both sides are seen using Vektor R4 rifles mocked up as AKM rifles.

Vektor R4 assault rifle of the South African forces with 50-round magazine - 5.56x45mm

An LRA member fires blindly with his R4.

Nineteen (Percy Matsemela) with his R4. Note that his magazines are taped together "jungle-style".

A child soldier on the right holds his M70AB2.

A child soldier with his R5.

An LRA member returns fire with his R5.

An LRA member returns fire with his R5.

An LRA sniper (Ikagene Mogotusi) opens fire at Sam with an SKS rifle.

An SKS is seen.

One of Dr. John Garang's (Fana Mokoena) soldiers appears to be armed with a real AKM.

A soldier in the background holding his AKM.

Colt Government Model HBAR, the A2 version of the AR-15 civilian rifle - 5.56x45mm. Note the lack of a third position for burst mode for the selector switch.

Sam's rifle has a scope mounted.

Sam asks Deng to hand him a Mauser 98 Sporter when they are pinned down by an LRA sniper. Sam refers to it as "the Mauser".

Sam asks Deng to hand him a Mauser 98 Sporter.

The barrel of the rifle.

Sam with his Mauser.

A member of the LRA fires an M1918A2 Browning Automatic Rifle in one scene.

The rebel is seen firing his BAR on the technical.

The rebel on the left fires his BAR.

A member of the LRA fires an RPK during an attack.

The rebel with the RPK (circled in red).

One of Sam's SPLA allies fires an FN MAG 58 during an ambush.

An SPLA soldier fires the MAG 58.

An SPLA soldier fires the MAG 58.

A member of the LRA fires an MG42 in one scene.

An MG42 is seen on the technical.

The rebel fires the MG42.

A member of the LRA fires an M79 grenade launcher during an attack.

The rebel fires his M79.

Marco about to fire his RPG-7.

An LRA member grabs an RPG-7.

A child soldier has an F-1 hand grenade attached to his webbing.

A child soldier has an F-1 hand grenade attached to his webbing.
Retrieved from "https://www.imfdb.org/index.php?title=Machine_Gun_Preacher&oldid=1426517"
Categories: