One Chance in One Thousand (Odin shans iz tysyachi)

One Chance in One Thousand (Odin shans iz tysyachi) is a Soviet 1969 adventure war movie directed by Leon Kocharyan. In Summer 1943 Soviet commando group under the command of Capt. Migunko (Anatoliy Solonitsyn) operates on Black Sea coast, occupied by Nazi Germany. In order to get valuable documents about German spy ring, Migunko impersonates SS officer and infiltrates the headquarters that is disguised as a resort for officers.

The following weapons were used in the film One Chance in One Thousand (Odin shans iz tysyachi):

Sgt. Sokolov (Vladimir Marenkov) holds a TT-33 when disguised as a German officer. Lt. Osyanin (Aleksandr Fadeyev) holds his TT during the action on the German airfield. In the final scene Capt. Migunko (Anatoliy Solonitsyn) gives his TT to Nina (Zhanna Prokhorenko). TTs in the movie are of correct pre-1947 version.

Sokolov, disguised as a German officer, draws his TT on Dvigubskiy.

Osyanin checks his TT in the scene on the airfield.

Migunko hands his pistol to Nina.

Nina with discharged TT in the final scene.

Kracht holds the Luger after his duel with another officer.

Migunko draws his Luger on Kracht, portraying that he is insulted by the latter.

A German officer is shot and drops his Luger in the final scene.

Dvigubskiy (Nikolai Kryukov) and Luftwaffe Lt. Col. von Bulow (Voldemar Akuraters) use Walther P38s during the duel. In the final scene Col. Koester (Gurgen Tonunts) draws a P38 from his pocket (not a best choice for pocket pistol).

Dvigubskiy holds the Walther after the duel.

But he is shot by Hatzel.

Kartsev holds the MP40 at the left.

A German soldier (Mark Tolmachyov) with MP40 on the checkpoint.

Sokolov and Igor Semernin with MP40s and Hatzel with DP-27 during the operation on German airfield.

An MP38 is seen together with MP40s of the Soviet commandos in the final scene.

Another view of Kartsev's AKMS.

Two German officers pose for the photo with their prey.

Kracht (at the left), Schirach (in orange coat) and other officers carry shotguns after the hunt.

Denis Korneevich fires the shotgun in the scene in wine cellar.

The group has a Degtyaryov DP-27 machine gun that is used by Lt. Osyanin (Aleksandr Fadeyev) and Harri Hatzel (Harri Schweitz).

Osyanin holds the DP after the landing of the group.

Hatzel fires the DP in duel with MG42 on watchtower.

Hatzel holds the DP in the final scene.

MG42 on the watchtower on German airfield.

A soldier fires the MG42. The belt is loaded with blanks.

The gunner is shot and drops his machine gun.

MG42 is mounted on BTR-40 that stand for German APC.

German soldiers with MG42 in the final scene. Note some white item inside the barrel. This is likely a pyrotechnical device that imitates the muzzle flame and smoke. 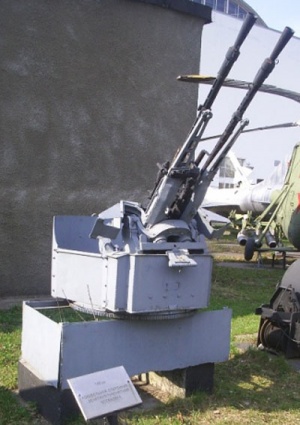 A close view of the mounting.

Soviet commandos use F-1 hand grenades in the final scene.

A mockup that looks different from F-1 is also seen in this scene.

Mockup grenade is seen at the left. It has more elongated body and very simplified "fuze".

German soldiers use stick hand grenades in the final scene. They appear to be mockups, resembling Model 24 Stielhandgranate hand grenades. The mockups look similar to ones, used in Otryad osobogo naznacheniya, filmed on same studio.

A German soldier throws a grenade.