Park is Mine, The

From Internet Movie Firearms Database - Guns in Movies, TV and Video Games
(Redirected from The Park is Mine)
Jump to navigation Jump to search 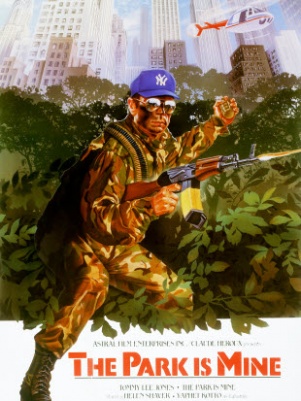 The following weapons were used in the film The Park is Mine:

The AKM rifle appears throughout the film as the main weapon of Mitch Garnett (Tommy Lee Jones), which he procures from a weapons cache hidden in Central Park by a friend of his who commits suicide at the beginning of the film, along with detailed plans for laying siege to the park in order to bring attention to the humiliations and indignities suffered by fellow Vietnam veterans and less fortunate people in New York City. 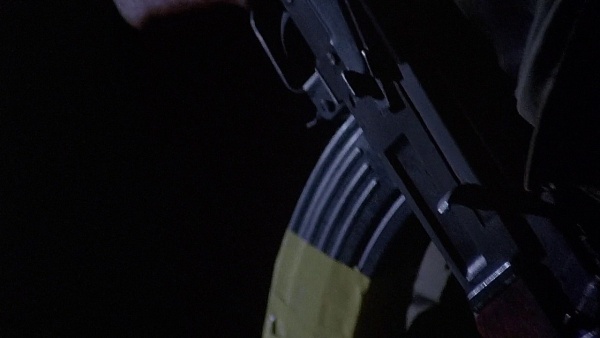 Closeup of the Mitch's rifle. 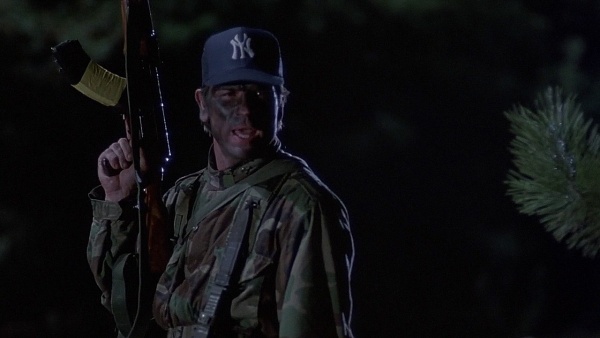 The AKM rifle appears throughout the film as the main weapon of Mitch Garnett (Tommy Lee Jones). 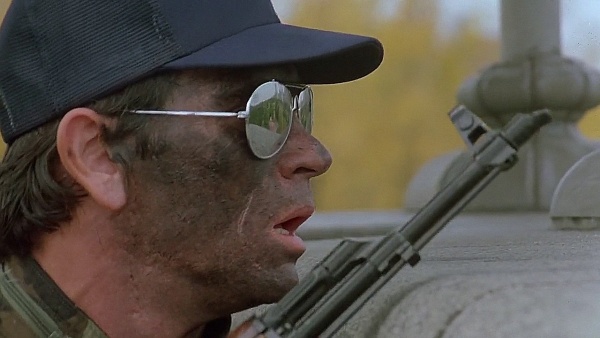 Closeup of the muzzle of Mitch's AKM as he surveys the park.

The M16A1 rifle is seen in the hands of NYPD ESU officers responding to Mitch's siege of the park almost throughout the film. ESU uses them when Mitch engages them in a shootout at the edge of the park. US military personnel can also be seen carrying M16A1's slung on their backs while marching in the Veteran's Day parade towards the end of the film. 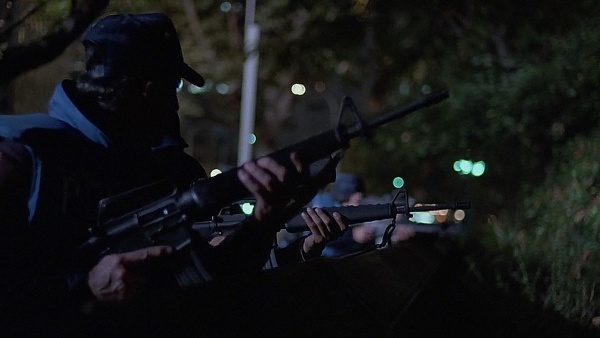 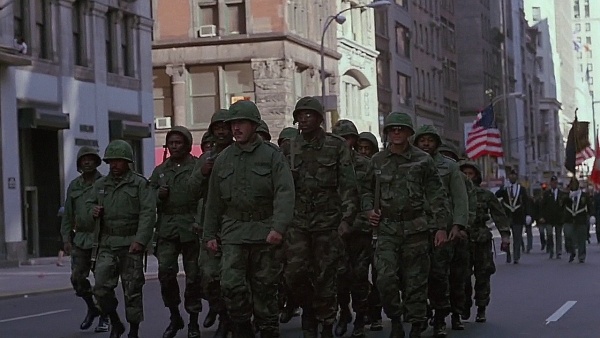 US military can also be seen carrying M16A1s slung on their backs while marching in the Veteran's Day parade towards the end of the film.

During the shootout at the edge of the park, one of the ESU officers can be seen using an M16 rifle (distinguishable from the other officers' M16A1's by the slab-sided receiver and lack of forward assist) fitted with an A1-style 'birdcage' muzzle brake and AN/PVS-2 Starlight night-vision scope mounted on the carry handle. 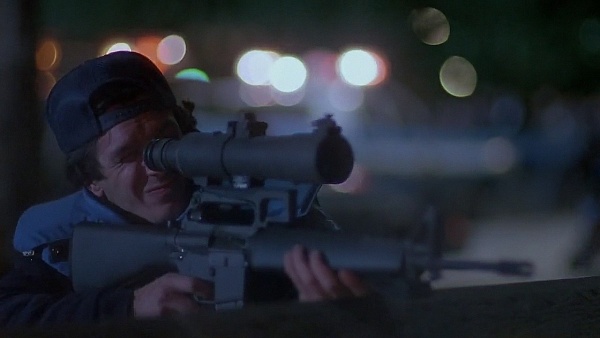 An NYPD ESU sniper aims his M16 rifle fitted with an AN/PVS2 Starlight night-vision scope during a shootout with Mitch.

ESU Captain Frank Eubanks (Yaphet Kotto) can be seen using an XM177 Colt Commando as his weapon of choice. 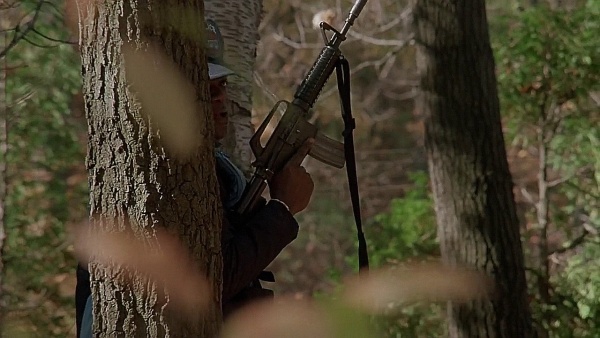 During the siege of the park, NYPD snipers can be seen taking up positions on skyscrapers surrounding the park armed with Remington 700 sniper rifles. At one point, corrupt NY Deputy Mayor Dix (Peter Dvorsky) and NYPD Commissioner Keller (Lawrence Dane) stage a trap for Mitch by calling him on one of the emergency phone boxes in the park and having the snipers attempt to shoot him when he answers. 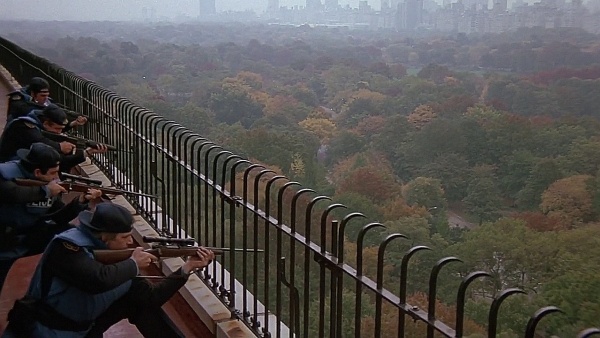 One of the two mercenaries, a former Việt Cộng named Tran Chan Dinh (Jong Soo Park), carries an Norinco Type 56-1 as his weapon of choice, distinguishable from Mitch's AKM by the underfolding metal stock, absence of the distinctive muzzle brake, and hooded front sights. 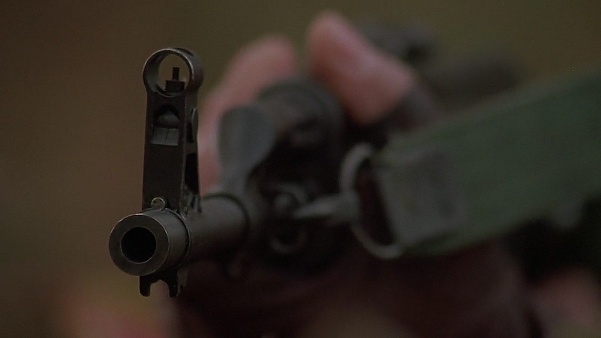 A closeup of the muzzle of Tran Chan Dinh's Norinco Type 56-1. Note that the cleaning rod appears to be missing in this shot

In addition to his AKM rifle, Mitch (Tommy Lee Jones) also carries an M1911A1 as his sidearm, though never uses it, only taking it out to inspect it before holstering it during the film. 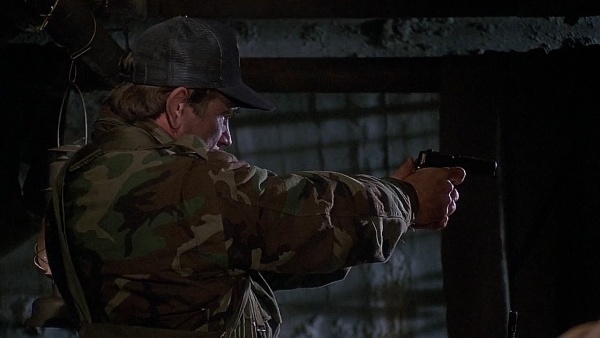 After being wounded by a burst from Mitch's machine gun, Ver Danken takes advantage of the distraction created by the arrival of Cpt. Eubanks to draw a Walther P38, wounding Mitch with it before being killed by Eubanks. 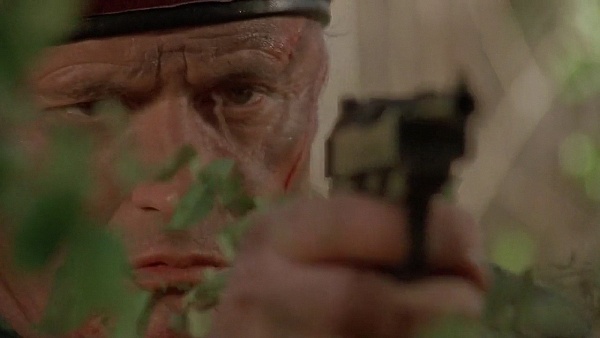 A wounded Ver Danken takes aim at Mitch with his Walther P38.

One of the ESU officers who attempts to enter the park to evict Mitch can be seen carrying a Walther MPL instead of an M16 variant like his comrades. 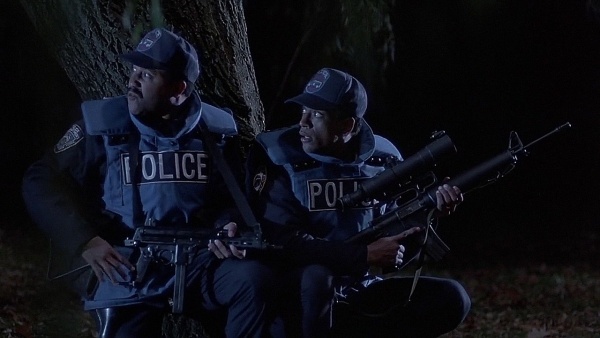 The NYPD ESU officer on the left can be seen brandishing a Walther MPL as his weapon of choice.

The other mercenary sent into the park after Mitch, Oskar Ver Danken (Peter Langley) uses a Carl Gustaf M/45B as his main weapon, using it to wound Valery when she makes a run for it while Mitch lays down cover fire. 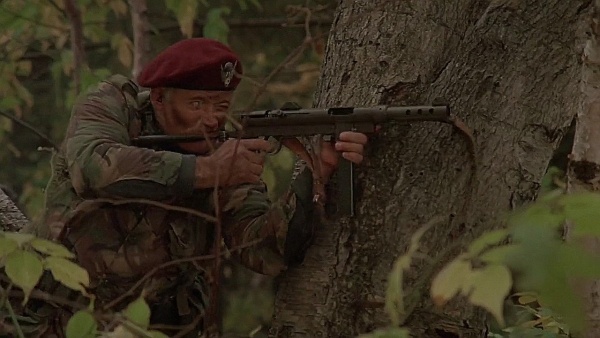 Numerous NYPD patrolmen and a few ESU officers can be seen carrying a variety of shotguns when responding to Mitch's siege of the park. One of them is the J.C. Higgins Model 20 shotgun. The giveaway is the wooden forearm style and the endcap of the magazine tube and how it mounts to the barrel. 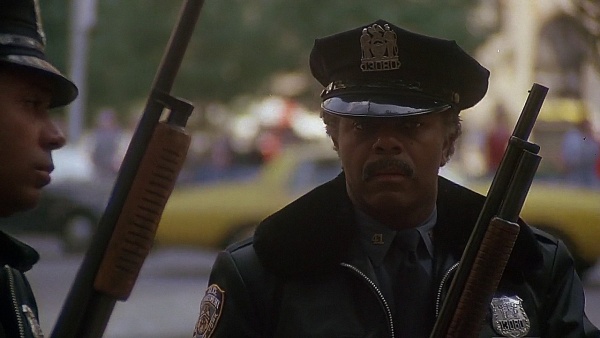 NYPD patrolmen brandish pump shotguns outside Central Park. The one on the left carries a J.C. Higgins Model 20 shotgun.

At least one of the NYPD offers responding to the siege of the park can be seen carrying a Winchester Model 1897 shotgun in riot configuration.

NYPD patrolmen brandish pump shotguns outside Central Park. The one on the right carries a Winchester Model 1897 Riot Gun.

When loading up for the final showdown with the mercenaries sent to kill him, Mitch arms himself with an MG42 machine gun, using it to wound Ver Danken. He then holds it on Captain Eubanks after he kills Ver Danken, prompting the officer to discard his weapon and unfasten his body armor to prove he means no harm. 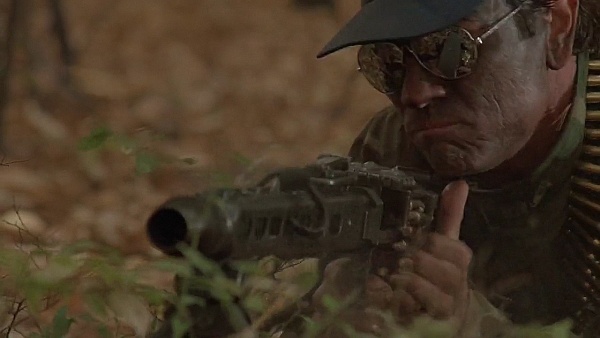 Mitch opens up on Ver Danken with his MG42.

Another weapon used by Mitch frequently throughout the film is an M79 grenade launcher. In one memorable scene, he engages a pair of NYPD ESU officers, intimidating them into fleeing by telling them that while the AKM was loaded with blanks, the grenade launcher had a live round loaded in it. One of the two mercenaries sent to kill Mitch also has an M79, firing several rounds before being killed by a burst from Mitch's AKM. 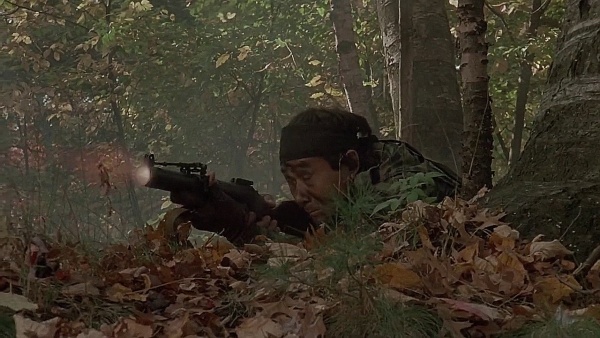 In addition to his Carl Gustaf M/45B, Ver Danken is also armed with an RPG-2 rocket launcher covered in strips of cloth for camouflage. He fires it during the final battle with Mitch, but is unable to score a hit. It should be noted that the rockets Ver Danken uses appear to be fakes of the PG-7V rockets used in the RPG-7 instead of the PG-2 rockets used by the RPG-2. 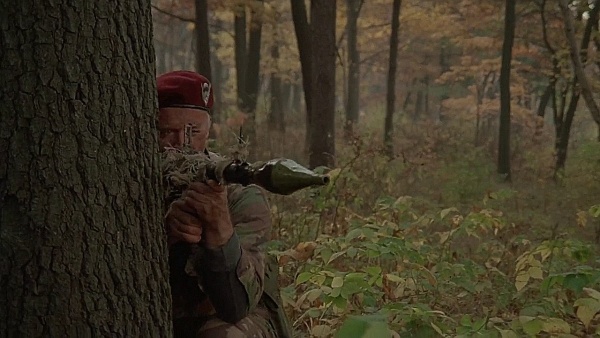 Ver Danken aims his camouflaged RPG-2 at Mitch & Valery. Note that the launcher appears to be loaded with a fake PG-7V rocket from an RPG-7 instead of a PG-2 rocket

Another weapon used by Mitch is a pair of Mk 2 hand grenades which he carries strapped to his web gear. He most notably uses them during the fight with the two mercenaries, although more as distraction and cover rather than to directly attack his enemies. 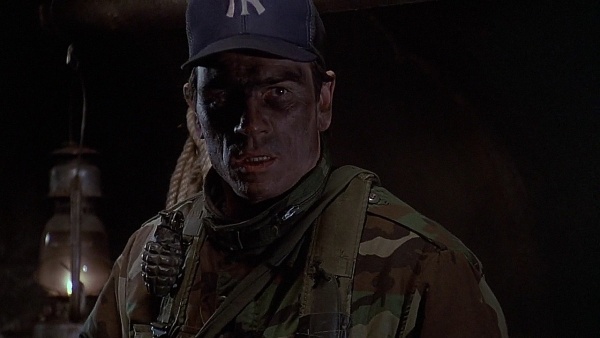 Mitch with a Mk 2 hand grenade strapped to his chest.

When the two mercenaries are sent into the park to kill Mitch, they go about sabotaging and reverse-engineering the various booby traps he had set throughout the park, as well as planting an M18A1 Claymore mine. A local TV news reporter named Valery Weaver (Helen Shaver) who had befriended Mitch after sneaking in to get a better story on the siege nearly triggers it, but is stopped at the last moment by Mitch, who disarms it by disabling the tripwire. 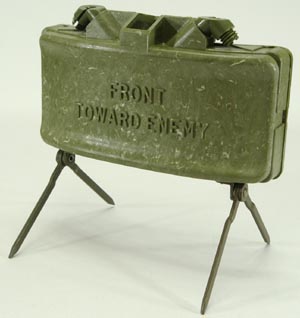 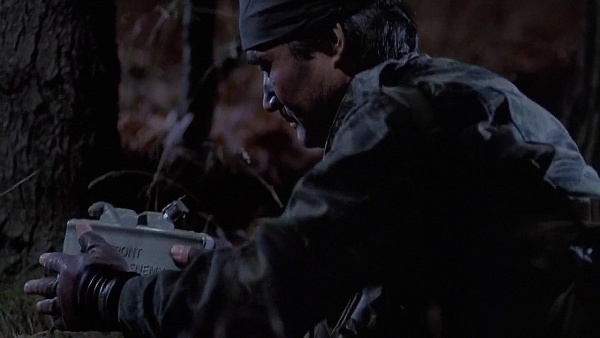 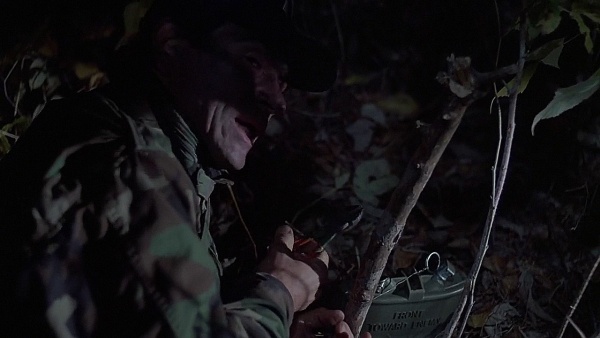 Mitch disarms the mercenaries' M18A1 Claymore by cutting the tripwire.

During the initial siege, blank ammunition in two magazines is seen taped together 'jungle-style' with yellow tape denoting what kind of ammo is and then magazines are switched to live ammo demarked by red tape. Just as depicted in Die Hard 2, characters switch between blank rounds and live rounds, which in reality would not work. Blank firing guns that 'autoload', i.e. are either semiautomatic or fully automatic, must be blank adapted in order to cycle. If a gun, like an AK (or Heckler & Koch MP5 as in the case of Die Hard 2) has been firing blanks, one cannot just switch magazines and start firing live rounds. The blank adapter (which restricts the barrel down to anywhere from 50% to 75% of the original interior diameter) would have to be removed or else the first live round would blow up the firearm.