Where Eagles Dare is a 1968 WWII espionage thriller directed by Brian G. Hutton (Kelly's Heroes) and based on the novel by Alistair MacLean (who also wrote the screenplay). Richard Burton, Clint Eastwood and Mary Ure star in the film as commandos sent on a mission to infiltrate a German fortress in the Alps and rescue an American Army general.

The following weapons were used in the film Where Eagles Dare:

Throughout the film, nearly all of the Broadsword operators are seen using captured Wehrmacht MP40 submachine guns, and nearly all of the German soldiers guarding the Schloss Adler also use them. In one particularly fun (but highly unrealistic) scene of the film, Lieutenant Schaffer (Clint Eastwood) wields two MP40s - one in each hand - and uses them to mow down attacking German troops. At no point in the film is its stock used.

Lt. Schaffer dry-fires his MP40 after cleaning it.

Schaffer with his MP40 in the castle.

Schaffer's MP40 lying on the floor after being deceived by Smith.

Schaffer and Mary Ellison (Mary Ure) firing MP40s at the control tower at the airfield (from a moving bus!)

Smith firing his MP40 at the airfield.

Both Major Smith (Richard Burton) and Lieutenant Schaffer (Clint Eastwood) are seen using what appear to be Walther PPK pistols (most likely in 7.65mm) fitted with suppressors throughout the film. At one point, General Julius Rosemeyer (Ferdy Mayne) tries to pick up Smith's gun after he drops it, but is killed by Schaffer before he can get off a shot.

Schaffer with his suppressed Walther PPK and Smith with an MP40 in the castle.

General Rosemeyer is shot by Schaffer after trying to grab Smith's PPK.

The traitor Christiansen (Donald Houston) grabs Schaffer's PPK after knocking him out.

Early on in the film, Mary Ellison (Mary Ure) also carries (but does not fire) a pistol fitted with a suppressor; hers, however, appears to be a Beretta 950 Jetfire, and the suppressor appears to be slightly shorter than those on Smith and Shaffer's PPKs. She leaves it with Heidi before infiltrating the Schloß Adler. 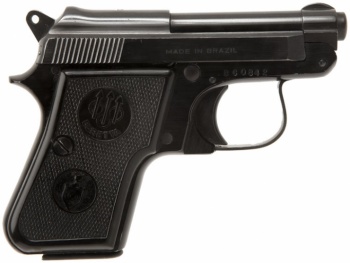 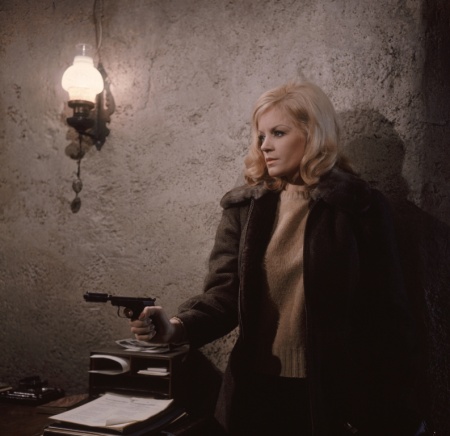 In the barn, Mary covers Smith while she ascertains it is indeed him. (production still)

Mary leaves her pistol on the table while Smith helps her take off her boots.

The Walther P38 is seen used by an SS officer during the raid on the inn. Another officer (Derek Newark) is seen with one in the hallway shootout.

An SS officer blows his whistle while holding his P38.

The SS lieutenant (Derek Newark) yells for one of his men to throw his grenade, P38 in hand.

The pistol used by Major von Hapen (Derren Nesbitt) is a Luger P08, which is later taken by the actor impersonating General Carnaby (Robert Beatty). It is never fired in the movie.

Major von Hapen with his Luger P08 (it was in this classic, explosive scene that Derren Nesbitt was nearly blinded when the blood-squib on his forehead went off)

While Lt. Schaffer is trying to holding off the guards in the Schloss Adler while Major Smith is in the radio room trying to call for help, two of the Germans set up an MG42 machine gun and begin firing at him. It is also featured near the climax of the movie when several Germans create a block for the cable car.

Some of the German soldiers fighting Lt. Schaffer attempt to toss Model 24 Stielhandgranate grenades at him, which in typical Hollywood fashion are tossed back (as if the Germans wouldn't be smart enough to delay their throw so that Schaffer couldn't throw them back).

A German soldier prepares to throw a "Potato Masher" at Schaffer.

Closeup of the grenades after throwing.

Some of the German guards at Schloss Adler use Karabiner 98k rifles, standard issue to the Wehrmacht in the war, but these are not as common as MP40s (in real life, the reverse should have been true). The gun is only ever fired twice in the movie, by the same soldier, at the end, who dies moments later. Another soldier guarding the armory holds one whilst he is on guard, but is killed by Schaffer before he can fire his Karabiner 98k.

Action shot: The guard in the armory is shot by Schaffer, dropping his rifle.

A Sten Mk V submachine gun is carried by Colonel Turner (Patrick Wymark) when he arrives at the airfield to greet Broadsword. This particular submachine gun lacks the forward grip, although this part was frequently broken in the field.

Note the steel stock as opposed to a regular Mark V wooden stock. Most likely this gun has been "downgraded" by removing the front wooden grip, rear pistol grip and wooden stock. Only thing left that is Mark V original is the front sight.