Fortress on Wheels (Krepost na kolesah) is a 1960 Soviet war movie. The story takes place in July 1941 on Soviet-German front. A Soviet armoured train is a mainstay of the defence against Wehrmacht offensive.

The following weapons were used in the film Fortress on Wheels (Krepost na kolesah):

Soviet officers' service sidearms are TT-33 pistols. They are mostly seen in holsters.

Many Soviet soldiers are armed with PPSh-41 SMGs.

Vozhzhov (at the right) with a PPSh.

A PPSh is seen on the wall inside the armoured train.

Political commissair Samarin (Vasili Vekshin) (at the left) and the commander of the armoured train Maj. Pyotr Kirillovich (Grigory Mikhaylov) (at the right) with PPSh-41s.

Pyotr Kirillovich and Samarin lead the crew of the armoured train after it is destroyed.

MP40 SMGs are seen in hands of German soldiers in several scenes. They are also used by Soviet soldiers and partisans.

A young partisan holds an MP40.

Many Soviet soldiers are armed with Mosin Nagant M1891/30 rifles.

A soldier fires his rifle.

Soldiers with M91/30 rifles on march. Some rifles are fitted with bayonets.

A soldier fires his rifle during the night battle.

A soldier at the right holds an M38 carbine.

Some German soldiers are seen with Mauser rifles. It's hard to say if they are Karabiner 98ks or Gewehr 98s or a mix of both.

German soldiers with rifles under the heavy artillery fire. Some of them seem to be long enough for Gewehr 98s.

A German soldier at the left holds a rifle.

In one scene Ostap Korneevich (Aleksei Bunin), the commander of partisan unit, carries a double barreled shotgun (later he replaces it with a Mosin Nagant M1891/30 rifle).

Ostap Korneevich (in the middle) with a shotgun.

In the same scene one of the partisans carries a single barreled shotgun (later he replaces it with a DP-27 machine gun).

A partisan behind Ostap Korneevich carries a shotgun.

One of the partisans holds a DP-27.

A soldier reloads his DP-27.

Degtyaryov DT machine guns are mounted on the armoured train.

A DT is seen below the turret.

MG34s are briefly seen in hands of German soldiers and Soviet partisans.

A German soldier carries an MG34.

Another German soldier carries an MG34 with folded bipod.

A partisan at the right mans an MG34.

Anachronistic MG42s are seen among the weapons that the commander of the armoured train gives to partisans.

The barrels of two MG42s are seen in the middle.

A partisan at the left mans an MG42.

Maxim M1910/30 machine guns are used by Soviet infantry and also mounted on the armoured train.

A Maxim inside the armoured train.

A Maxim covers the work to restore the broken railway.

A Maxim on the armoured train. It is covered with armoured tube.

Two gunners remove the Maxim from armoured mounting in order to use it outside the train.

A Maxim in night battle.

A Maxim in the final scene. 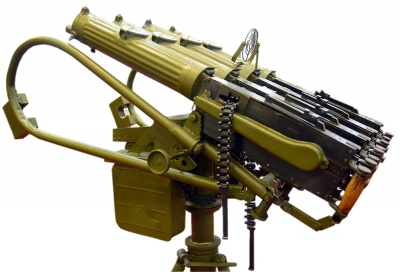 A quad Maxim on flatcar.

Gogolko at his machine gun.

A Maxim M1910 with smooth water jacket is seen in one scene.

A broken-down Maxim and a slain gunner are seen on the battlefield.

A DShK on the armoured wagon.

A DShK is seen behind Sgt. Aleksei Gogolko (Andrei Khlebnikov).

A barrel of 37-mm AA gun is seen at the background.

RGD-33 grenades are used by Soviet soldiers in several scenes.

Sailor Yurko (Pavel Dubashinsky) carries an RGD-33 and an F-1.

Nadya (Natalya Naum) takes a grenade from a slain soldier.

Sailor Yurko (Pavel Dubashinsky) carries an RGD-33 and an F-1.

A soldier (next to a sailor) carries a grenade tucked at his belt.

Soviet 53-K AT guns are seen in several scenes.

A 45-mm AT gun is seen during the march of Soviet troops on the forest road. 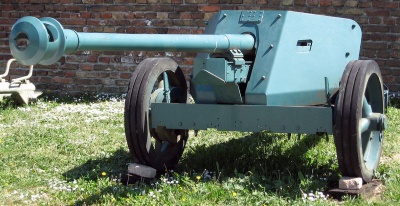 82-mm mortars BM-37 are used by both Soviet and German soldiers (in the latter case they stand for German Granatwerfer 34 Mortars.) 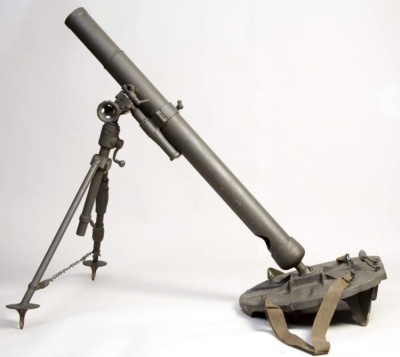 German soldiers run to the mortar.

They fire at the armoured train.

A Soviet soldier at the left carries the barrel of the mortar.

A genuine WWII-era armoured train appears in the movie. It's a late war version of Soviet armoured trains. It consists of two armoured wagons, one with three turrets of T-34 tanks with 76.2-mm F-34 guns, and another one with a single such turret, and of several flatcars with 76.2-mm M1938 AA guns, 37-mm M1939 AA guns, 45-mm M1937 guns and numerous machine guns.

A side view of a burning tank.

Another tank in attack. Next to it a hull of a destroyed tank is seen.

A mockup of the Sd. Kfz. 231 (6-rad) German armoured car is seen in one scene. It's a movie prop, specially made for filming. Note that the turret isn't rotating.