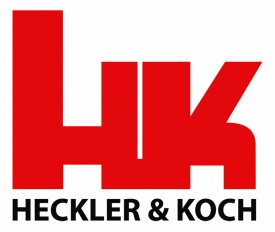 Heckler & Koch GmbH was founded in 1949 by Edmund Heckler, Theodor Koch, and Alex Seidel, three former engineers for Mauser's factory in Oberndorf, which had been shut down and dismantled by French occupying forces after Germany's defeat in World War II. Initially, HK manufactured precision machines and machine parts, such as machine tools, bicycles, sewing machines and gauges. It was not until 1956 that HK started to manufacture firearms, in response to the German government's call for a new battle rifle. HK's candidate, the G3, was selected and became standard issue for the German military by 1959. The G3 also led to the development of the German Army's general-purpose machine gun, the HK21, and a smaller version of the battle rifle chambered for NATO-standard 5.56mm rounds, the HK33. Beginning in 1966, HK developed the HK54 submachine gun, introduced in 1969 as the MP5 submachine gun.

HK has a history of innovation such as incorporating polymers in weapon designing and the use of integral rails on handguns. They also developed modern polygonal rifling, noted for its high accuracy, increased muzzle velocity and barrel life.