The Browning Automatic Rifle or BAR (sometimes incorrectly known as the "Browning BAR," which is actually the name of a later semi-automatic rifle which shares no parts with the original BAR) traces its origins back to a First World War French concept of a "walking fire" gun that could be used from the hip by soldiers crossing No Man's Land to suppress the enemy trench line. Ultimately the 16-pound weapon was not suited to this role, but was adopted as a light machine gun by the United States military and was used extensively during the Second World War (as the improved M1918A2) and Korean War, ultimately seeing its last action in US service in Vietnam where it was replaced by the M60 machine gun. BARs remained in National Guard armories until the mid-70s, and was still in use by other countries as late as the 90s.

While heavy, it had a relatively low capacity for a support weapon (most period LMGs using a 30-round magazine compared to the BAR's 20; an experimental 40-round magazine was created, but for infantry use it was turned up too cumbersome, and it was only limited used in anti-aircraft roles) and a fixed barrel which could not be easily changed out, making it unsuited for protracted fire. It was often employed in a capacity more similar to a modern Designated Marksman Rifle, with the BAR gunner being tasked with extending the squad's range of fire and suppressing enemy snipers.

The BAR was also sold to civilians in the interwar years, and proved a popular weapon among gangsters; the civilian variant, the Colt Monitor, was acquired by US law enforcement to combat the threat. Clyde Barrow and his girlfriend Bonnie Parker were particularly notorious for their use of a cut-down M1918 BAR.

The highly successful FN MAG uses the same locking mechanism as the BAR, though since it is belt-fed the MAG's is upside-down compared to the BAR's. The BAR action was also used in the French Chatellerault Light Machine Gun, descendants of which included the ZB26 Machine Gun and through that the Type 96 and Bren gun.

The Browning Automatic Rifle and variants can be seen in the following films, television series, video games, and anime used by the following actors:

The M1918A2 was a broad package of improvements to the original BAR that included a magazine guide, new sights, a bipod, modified fire control group and a redesigned handguard and stock. The A1 version with a spiked bipod and hinged steel buttplate is almost never seen as very few examples were made; the M1922, the US Cavalry version with a ribbed barrel and spiked bipod, is similarly rare. 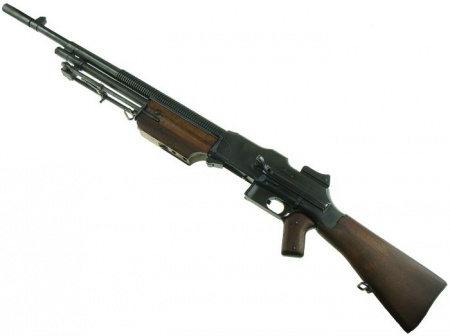 The Colt Model 1925 was a commercial version of the BAR, known as the R75 and based on the FN BAR with the pistol grip, larger handguard, bipod and so on. It was released in a wide variety of calibers such as .30-06 Springfield, .303 British, 7x57mm Mauser, 7.92 Mauser and 7.65x53mm Belgian Mauser. A modified version of this was the Colt R80 Monitor, developed for the FBI as a "fighting rifle". The bipod was removed, the barrel and gas system were shortened, the pistol grip was added and it was fitted with a Cutts compensator.

The FN Model D is an improved European version of the FN Model 1930, a licensed clone of the 1925 version of the Colt R75. Note the folding carry handle, quick-change barrel, and a smaller forend than the American M1918 versions. Also note separate pistol grip and stock.

Karabin maszynowy obserwatora wz. 37 ("Observers machine gun M1937") is a Polish aircraft mounted flexible machine gun, based on the Browning wz. 1928. The main difference between the base Wz. 28 and the Wz. 37 is a new feeding mechanism that uses a 91-round pan magazine mounted on the standard receiver. The buttstock of the infantry machine gun was replaced with a spade grip.

The Wz.37 was nicknamed "Szczeniak" ("Pup") due to its lightness and compactness in comparison with compared with previously used Vickers machine guns. The Wz.37 was used mainly on PZL.37 Los bombers and LWS-3 Mewa observation and close reconnaissance aircrafts. Only 339 pieces were produced until the defeat of Poland in Autumn 1939.

The Wz. 37 Szczeniak and variants can be seen in the following films, television series, video games, and anime used by the following actors:

The Kg m/21 is the Swedish version of the BAR, first bought by Sweden in 1920 from Colt with modifications such as a bipod, pistol grip, dust cover and conical flash hider. Sweden would also buy the license to produce the BAR and subsequently adopted a modified version based on the FN Model D as the m/37 in 1937. Both the m/21 and m/37 were kept in production until 1949 and used in service until the Swedish adoption of the FN MAG in 1958 although the m/21 and m/37 remained in rear line arsenals well into the 1980's.

The Ohio Ordnance Heavy Counter Assault Rifle (HCAR) is a modernized version of the BAR made by Ohio Ordnance, who also make semi auto clones of the original M1918A2 pattern.

The Ohio Ordnance HCAR and variants can be seen in the following films, television series, video games, and anime used by the following actors: