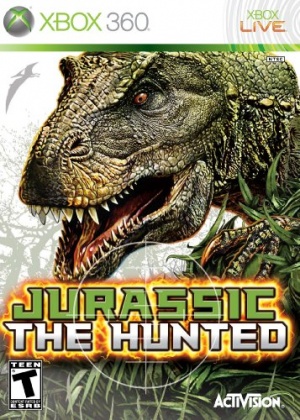 The following firearms are featured in the video game Jurassic: The Hunted.

A Colt XSE pistol with wood grips and an 8 or extended 12-round magazine capacity is featured in the game. It is the first gun available, called the .45 Pistol in game. You can fire it very fast and it can take down most smaller dinos with a few shots. 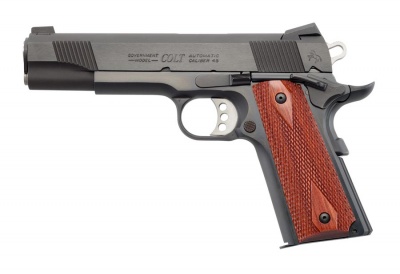 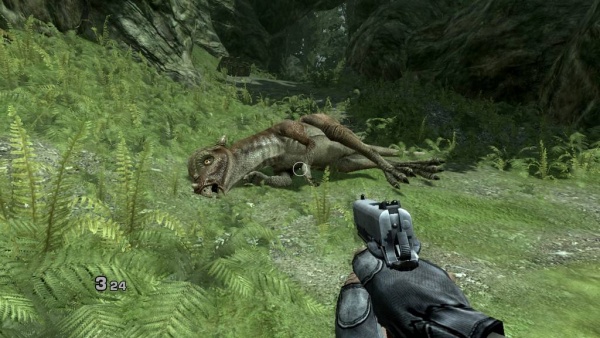 A fully-automatic Glock 18 is featured with a 20-round mag. Good for close quarters (aka you are face to face with a pack of hungry Velociraptors). Called the 9mm Automatic. 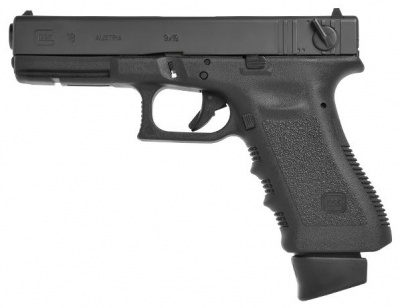 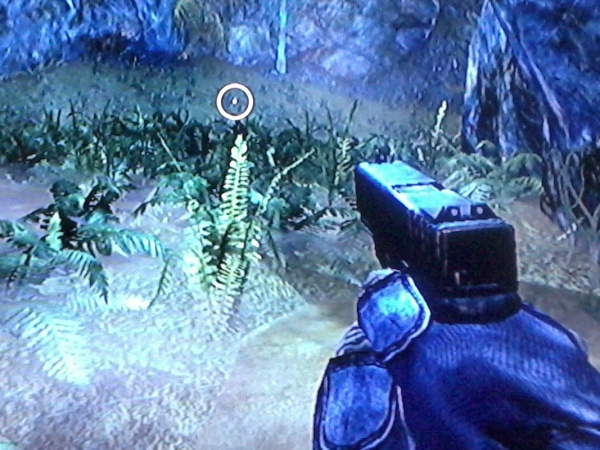 A stainless Taurus Raging Bull is featured in game as the most powerful handgun and the third one you can get. Called the .44 Magnum. It holds 5 shells but can be upgraded to hold 7.

A Colt Model 1855 is featured in the game as the Model 1855. It holds 6 or 9 rounds in its cylinder. Reloads are fairly long, as well as the Rate of Fire, but at the beginning of the game the damages compensates for that. 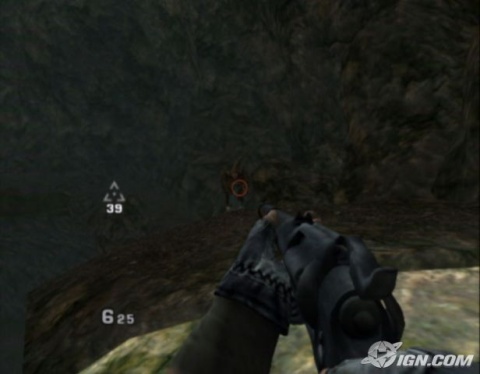 A scoped Whitworth Rifle appears in-game. Due to its long reload time, it is not useful in close range combat, but is good for long range sniping, and can kill most enemies with a shot to the head. 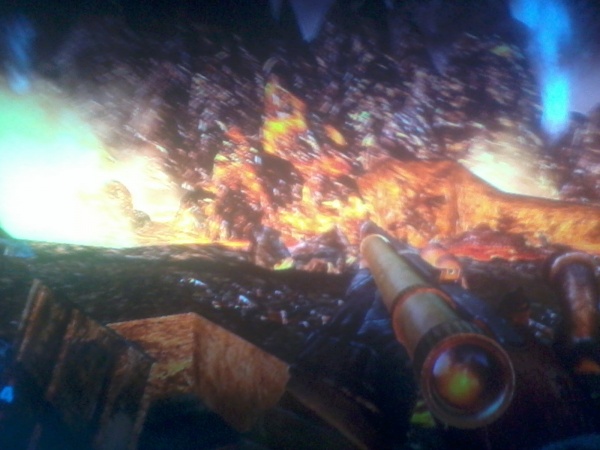 The Browning Automatic Rifle (BAR) is featured in the game with a 20 or 30 round extended mag. It also has a high rate of fire for the BAR with decent damage, considering it is the first automatic gun you can get. Called the .30-06 Assault Rifle. 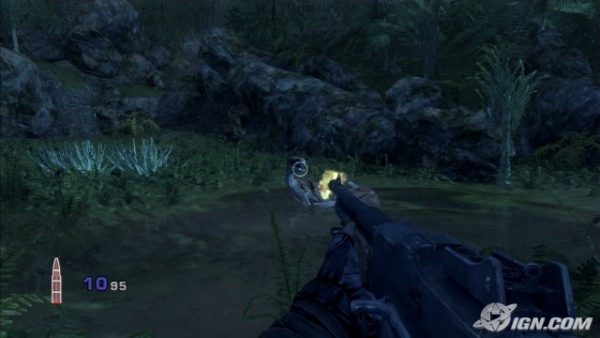 A futuristic weapon only available in the first mission on hard mode. The weapon has a 5 round magazine that reloads by itself and its firing mode is automatic.

An FN SCAR-L with a Red Dot sight and a 40 round mag is available in the game and has a good rate of fire and damage. Called the 5.56mm Assault Rifle. 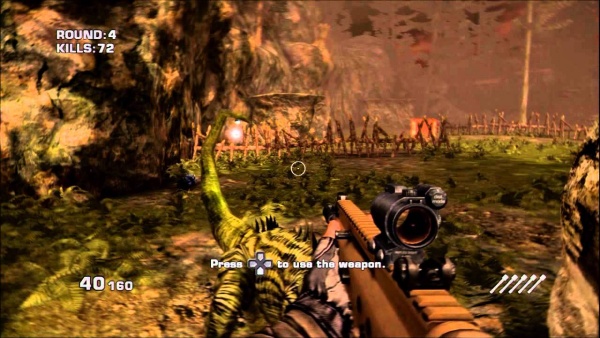 Dylan wields the FN SCAR as he is attacked by a Deinonychus.

A Mossberg 590 "Compact Cruiser" is in the game with 8 round shell capacity, sawed-off and with a vertical foregrip. Very good for close quarters, especially against fast enemies. 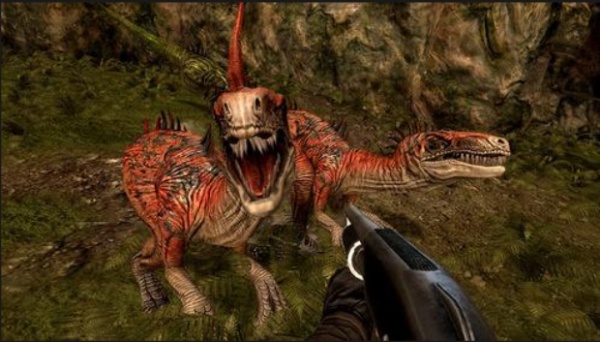 When Craig Dylan acquires the battery from the alien drone, right by it is a crate with a futuristic shotgun (referred to as the "ESD-P206") that operates like a street sweeper shotgun. 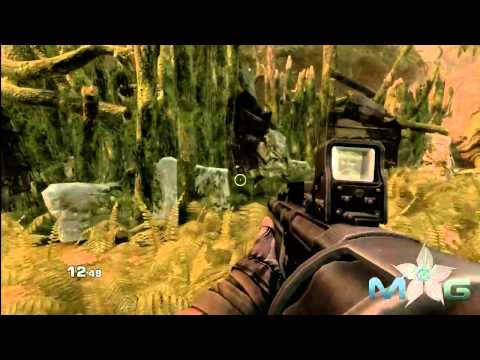 The M249 SAW is in the game with 100 or a 200 round extended magazine. One of the best guns in the game due to its high mag cap, good damage, and high ROF. Called the Light Machine Gun in the game. 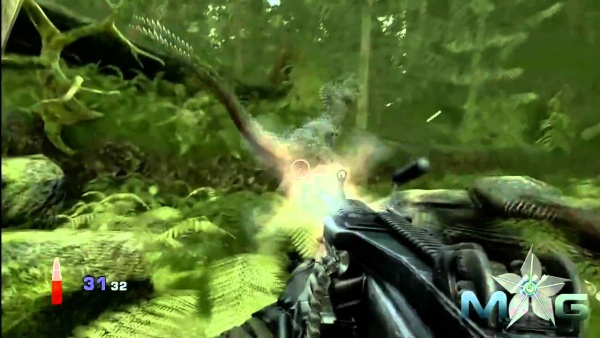 An unknown crossbow is in the game, shooting explosive arrows with high damage. Max ammo is only 5 shots so you must use it wisely. It is also easy to kill yourself with the explosive ammunition.

The RPG-7 rocket launcher is available in the game. However, it is relatively impractical to use since most combat is close quarters and the weapon's first appearance is right before the boss fight with "Spike". By the time the player manages to get the weapon fired they will be within "biting distance" of most enemies. Also, it doesn't appear in the PS2 version.

The Gatling Gun is featured in game with 200 rounds mags, used as an immobile gun for fighting off waves of dinos or the T-Rex's. 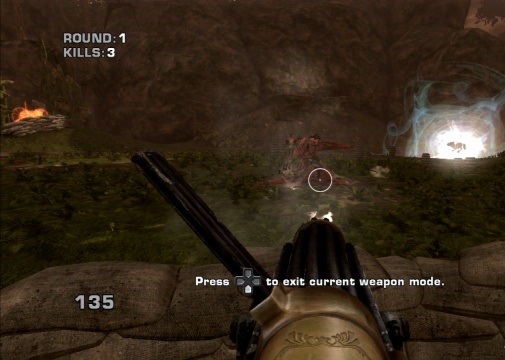 A Browning M2 is used as a turret weapon against the two T-Rexes. Also it is used in Survival Mode if the player finds all the machine gun parts in the Single Player Campaign. 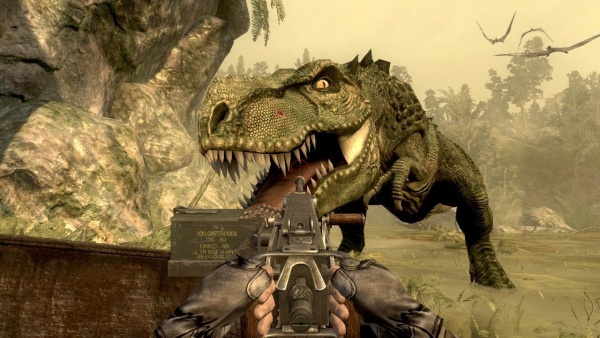 Dylan fires the Browning M2 at a Tyrannosaurus rex.

An MG42 machine gun is used as a turret weapon when fending off giant scorpions at the German Submarine.

Dylan finds a downed helicopter with a GE M134 Minigun that he uses to fend off a pack of Deinonychus. 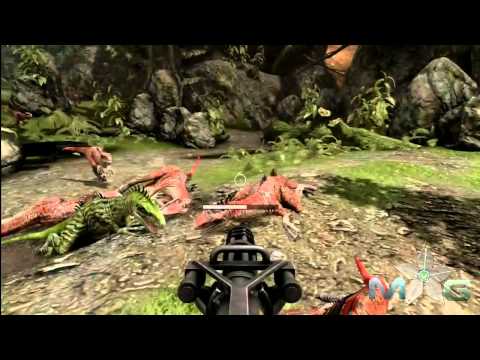