From Internet Movie Firearms Database - Guns in Movies, TV and Video Games
(Redirected from Live by Night)
Jump to navigation Jump to search 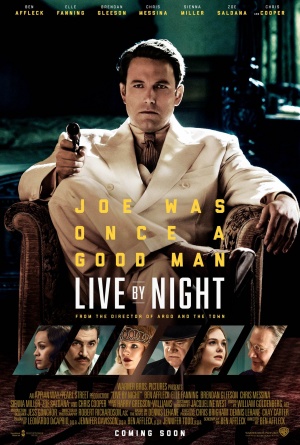 Live by Night is a 2016 crime film written, directed, co-produced and starring Ben Affleck as Joe Coughlin, a Boston gangster during the time of Prohibition who also happens to be the estranged son of a Boston police captain and who starts running a bootlegging operation in Florida. The film was adapted from a novel by Dennis Lehane (the author of Mystic River and whose novel Gone Baby Gone was previously adapted into a film by Affleck). The cast includes Elle Fanning, Brendan Gleeson, Sienna Miller, Zoe Saldana, Titus Welliver and Chris Cooper, the latter two who also co-starred in Affleck's 2010 directorial effort The Town. The film was also co-produced by Leonardo DiCaprio.

The following weapons were used in the film Live by Night (2016):

Joe Coughlin (Ben Affleck) carries what appears to be a Colt Model 1902 as his sidearm. 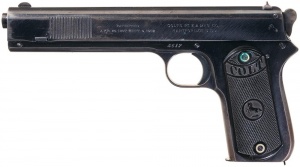 Joe Coughlin (Ben Affleck) with what appears to be a Colt Model 1902 moments before a robbery.

Coughlin sets his pistol on a desktop. Note the squared-off muzzle, differentiating it from other automatic pistols of the era such as a 1911 variant.

A suppressed Colt Model 1903 pistol is used by Joe. 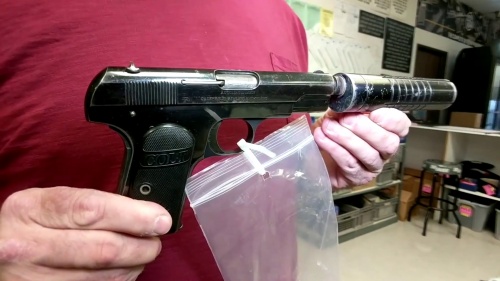 A suppressed Colt Model 1903 pistol is held by Joe.

Joe Coughlin with the pistol.

Dion fires his CZ during the getaway.

Dion fires his CZ at the approaching cops.

A bank guard fires a 4-inch .38 police revolver, likely a Colt Official Police during a robbery.

The bank guard fires his revolver.

R.D. Pruitt (Matthew Maher) shows up to his meeting with Coughlin with a revolver tucked in his belt. While it's never drawn and not seen in detail, the revolver resembles a Colt Police Positive.

The grip and cylinder of Pruitt's revolver can be seen sticking out of his waistband.

Coughlin's second man during the bank robbery carries a cut-down Winchester Model 12 shotgun which he uses to great effect during the getaway. A gunman is also seen firing an unmodified 1912 during the final shootout.

The same man fires the shotgun.

Coughlin's second man pumps a new shell into the chamber.

A gunman fires a full size 1912 during the climactic shootout.

Pruitt's men with their shotguns.

The cops pursuing Coughlin and his gang after the bank robbery fire M1921A Thompson submachine guns, noted by their lack of barrel compensators, from their moving police cars. While the Thompsons are period-correct models, the 30-round stick magazines they're loaded with are anachronistic due to their not being manufactured until 1942. The 20-round magazines would have been appropriate for the time of the film. One of Coughlin's gunmen also uses a M1921A with a 50-round drum in the climactic gun battle. One gunman is seen briefly wielding a Thompson with the buttstock removed.

A cop aims his Thompson out of the police car. Note the anachronistic 30-round magazine.

A cop fires his Thompson. Note the absence of a compensator.

Another cop fires his Thompson at Coughlin's car.

Coughlin's gunman with the M1921A. Note the 50-round drum and the how the manufacturing proofs are painted white.

The same gunman lets off a one-handed burst from his Tommy Gun.

A Pescatore thug goes down with a Thompson that has had the buttstock removed.

The Thompson M1921AC is seen in the hands of multiple gangsters, including Dion Bartolo, throughout the film. They're are seen the most during the climactic gunfight, during which gunmen on both sides wield Thompsons.

One of Coughlin's gunmen opens up with his Thompson.

Dion unleashes hell with his Thompson.

One of Coughlin's gunmen is seen with a M1903 Springfield during the final shootout. It appears to be a period-correct Springfield (Not a 1940s WWII model), indicated by the humped upper-handguard.

Coughlin's gunman fires at a Tommy Gun-wielding thug with his 1903.

The same gunman fires in a stairwell.

Joe Coughlin wields and fires a customized Browning Automatic Rifle during a shootout. This particular gun resembles the famous sawed-off BARs used by Bonnie and Clyde, and also the ones used in the film Public Enemies. The major difference is that while the barrel is shortened, the one in the film also has a shortened stock, making it a sort of BAR "whippet gun." While the shortened stock and barrel would certainly make the gun more concealable and lightweight ("lightweight" being a relative term for a 16-pound firearm), controlled fire would probably be near impossible. The gun also has a later model sight as opposed to the original WWI model sight, which is considerably rarer. At least one other gunman is seen holding an identical BAR in the film (likely the same gun used in a different scene).

This is an actual Clyde Barrow cutdown Browning Automatic Rifle. The one in the trailer is similar, but also has a shortened stock and a later model sight.

Joe Coughlin shoots through a wall with the cut-down BAR (an easy feat when firing .30-06).

Coughlin takes cover with the BAR during a shootout.

One of Coughlin's gunman with another identical BAR (almost certainly the same gun reused in a different scene).
Retrieved from "https://www.imfdb.org/index.php?title=Live_by_Night_(2016)&oldid=1415234"
Categories: